When rumor is true… 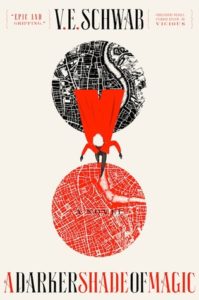 Kell is one of the last Antari—magicians with a rare, coveted ability to travel between parallel Londons; Red, Grey, White, and, once upon a time, Black.

Kell was raised in Arnes—Red London—and officially serves the Maresh Empire as an ambassador, traveling between the frequent bloody regime changes in White London and the court of George III in the dullest of Londons, the one without any magic left to see.

Unofficially, Kell is a smuggler, servicing people willing to pay for even the smallest glimpses of a world they’ll never see. It’s a defiant hobby with dangerous consequences, which Kell is now seeing firsthand.

After an exchange goes awry, Kell escapes to Grey London and runs into Delilah Bard, a cut-purse with lofty aspirations. She first robs him, then saves him from a deadly enemy, and finally forces Kell to spirit her to another world for a proper adventure.

Now perilous magic is afoot, and treachery lurks at every turn. To save all of the worlds, they’ll first need to stay alive.

I waited a loooong time before reading this book. I kept seeing very enthusiastic reviews but never got the opportunity to read it until Flavia at Flaviabibliophile organized a read along.

It was the kick in my proverbial behind that I needed (side note: my behind is NOT proverbial).

Now I can say that I was wrong so many times!

–I thought Holland was good well he is not. Or maybe he is but he was not exactly possessing free will. How much of his actions were due to compulsion and how much due to power hunger?

–I thought red London had a bad side and Grey London was better but if I had to choose now I would live in Red London. First because magic is pretty incredible, second as Rhy is a flirt and third because I may have a slight crush on Kell;

–I thought Lila was just an ordinary girl but I had a big surprise awaiting. 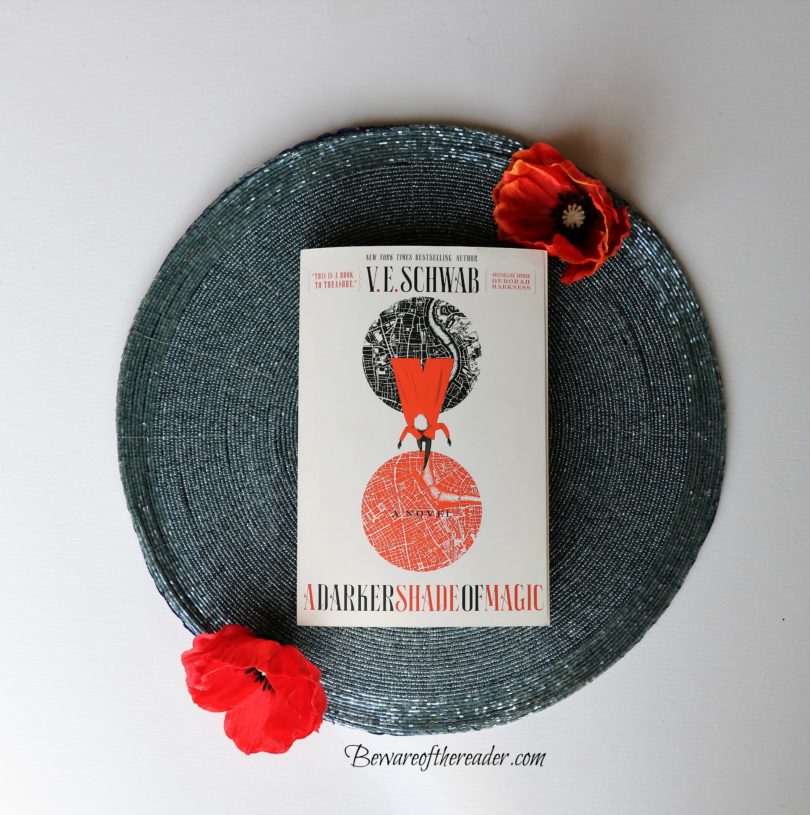 Back to the story now.

The beginning was slow as Veronica Schwab built a rich and complex world. I had to understand who was who, what was an Antari, what was exactly Red London to Grey and White London. Who was the good guy and who was the bad guy. Once all the chess pieces were set I really enjoyed my read and wanted to read it in one sitting.

Kell is Antari with one eye blue and a black eye. Two eye colors with one black eye is the Antari’s mark. They are the only magic bearer able to go through the different London, black London aside so far as this latest one has been sealed centuries ago. To go from one London to the other you need a token from the London you want to go through, Antari’s blood and a magic word.

Red London’s habitants nearly all bear magic. They are cognizant of other Londons as Grey and White whereas Grey London’s people are not aware of magic. Grey London is closer to our own world. White London is really glum and frightening. People try to hold onto magic as they can and they are ruled by two evil twins. I mean really, really, really evil.

The kind of evil you’ll love to hate. No salvation for these two as they love torturing and enslaving people. Charming, told you so.

Of course Lila wouls explain these Londons much better:

“Sure I do,” countered Lila cheerfully. “There’s Dull London, Kell London, Creepy London, and Dead London,” she recited, ticking them off on her fingers. “See? I’m a fast learner.”

Kell is a messenger used to send words from one king to the others.

There is still a mystery around Kell as we know that he is Antari, powerful but he’s been adopted by the red Royal family and he does not remember his youth nor does he know who his parents were. I love this secret as it means we’ll have more to discover about him in the next book!!! Who were his parents?

Kell loved testing boundaries and rebelling somehow smuggling tokens from other Londons. His brother prince Rhy, urged him to stop as it’s forbidden but you have to understand that it’s a way to have some control for Kell. He is loved by the King and Queen but feels used for his magic, a pawn in a big game.

Some errand will take a dramatic turn and he’ll meet Lila, thief extraordinaire from Grey London. They’ll become forced allies to save their world.

I won’t say more about the plot as I don’t want to spoil your fun.

Veronica Schwab succeeded in building a complex and interesting world enthralling the reader in its snare as we want to know if Kell and Lila will win and destroy the bad guys lurking in the shadows.

Have you read this book? Loved it?