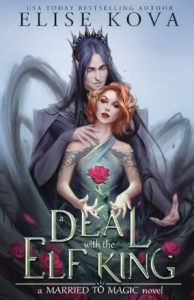 Perfect for fans of A Court of Thorns and Roses and Uprooted, this stand-alone, fantasy romance about a human girl and her marriage to the Elf King is impossible to put down!The elves come for two things: war and wives. In both cases, they come for death.

Three-thousand years ago, humans were hunted by powerful races with wild magic until the treaty was formed. Now, for centuries, the elves have taken a young woman from Luella’s village to be their Human Queen.

To be chosen is seen as a mark of death by the townsfolk. A mark nineteen-year-old Luella is grateful to have escaped as a girl. Instead, she’s dedicated her life to studying herbology and becoming the town’s only healer.

That is, until the Elf King unexpectedly arrives… for her.

Everything Luella had thought she’d known about her life, and herself, was a lie. Taken to a land filled with wild magic, Luella is forced to be the new queen to a cold yet blisteringly handsome Elf King. Once there, she learns about a dying world that only she can save.

The magical land of Midscape pulls on one corner of her heart, her home and people tug on another… but what will truly break her is a passion she never wanted.

A Deal with the Elf King is a complete, stand-alone novel, inspired by the tales of Hades and Persephone, as well as Beauty and the Beast, with a “happily ever after” ending. It’s perfect for fantasy romance fans looking for just the right amount of steam and their next slow-burn and swoon-worthy couple.

Short review once again as I am racing through books to finish the year.

First thing: the cover is worth 5 stars.
I went for the hardcover as the naked book is one of the prettiests. That alone was already worth buying.

Second thing: this was a “bookstagram made me do it” as many friends raved about it. I love fantasy and especially stories about fae and elves.

Did it live up to my expectations?
Not totally.
I wanted to be amazed and I have been truly entertained but there was just small things missing to make me give it five stars.

Even if it’s not my best read of the year, that story has many assets!

I found the world building and the story arc imaginative.
You have Luella, a young women whose village paid for her studies and who now is the village’s herbalist/healer.
She always wanted to heal others and she has a small shop at her parents house.
We are on the day where an Elf delegation will come to the village as they expect the village to give them the next human queen. The human queen is a girl possessing magic that is needed to restore the seasons in the elf’s world. Every hundred years or so, the village provides a new queen.

Of course you can guess that Luella will be chosen as the next Queen and will have to follow Eldas, the elf king and marry him.

Only…things are not as it seems, Luella has not been educated to fill that role in and the world is dying.
From that moment on, it will be a race for Luella to discover a mean to save the world and put an end to the human queen’s cycle. But maybe she will lose her heart in the process.

Luella is a female character to my liking.
She is brave, is not cowering when faced with the intimidating Eldas and she is also extremely caring. She loves people, want to help and to feel useful.
She has been dropped into a world she knows nothing about, has no notion of magic but she will take everything in stride. She will learn fast even when cruel elves play pranks on her.

If Luella is a sunny character, Eldas is the perfect brooding hero. She is the sun and he is the moon. Tall, handsome, distant, intimidating and …lonely. When I learned about his childhood and how alone he felt I wanted to comfort him, just like Luella. He might be the king and harsh if need be, I Loved how protective of Luella he was.
I need my heroes very protective of their love interest, that’s just my kick! 🙂

The story flowed effortlessly, the relationship was built organically, setbacks and betrayals added some spice to get the ball rolling. Nothing felt forced either.

This story gives you a slow burn in a magic world on a background of a desperate quest to save the world and enemies hiding in the shadow. This is a fast and sweet read. A treat for fantasy lovers.