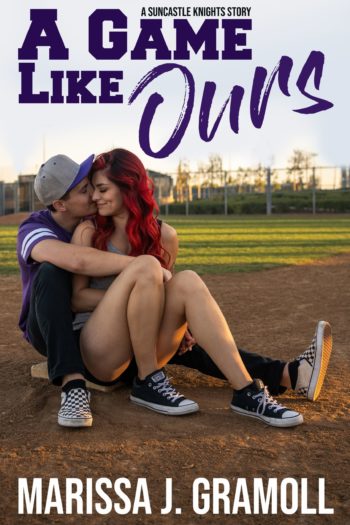 A Game Like Ours is a New Adult, Queer, College Literary Fiction with strong romantic themes about coming to terms with loss and identity.To the outside world, Bobby Anderson is an attractive, charismatic baseball star.

But inside, Bobby holds secrets—including his closeted sexuality—and each secret alone has the power to destroy his carefully-constructed life.

When his best friend Cody dies, Bobby is thrown into the unwitting role of supporter for Cody’s grieving fiancée, Lexie. The issue? Bobby has long-harbored feelings for her that he never allowed to surface.

Torn between his growing attraction for Lexie and devotion to his deceased friend, Bobby is forced to re-examine his life and concern about divulging his sexual identity. Another secret spoken by Cody during his final moments eats away at Bobby’s conscience, driving the wedge of Cody’s death deeper.

Once these secrets come to light, will Lexie ever be able to forgive them? Can she accept Bobby for who he is? Will she ever want anything to do with him again?

This is new adult/queer/college literary fiction and the author contacted me to ask if I was interested in reviewing her book, saying it was her first work.

I don’t do this anymore…usually BUT the synopsis and her pitch had me intrigued so I said yes.

And.. I am quite impressed!

I have read second or third works far less interesting and polished than A Game like Ours!

I didn’t find many faults that I usually encounter in first works of indie authors. But when you read the author’s notes, you realize that she began that book when she was in high school. I can’t imagine the countless reread and editing it went through!

What’s even more impressive is that Marissa J Gramoll is talking about lots of very sensitive and complicated topics and she does it very well.

Be warned, that book has tons of triggers! Homophobia, eating disorder, grief, to name a few.

That book is character driven.

The whole story-arc is centered around two main character’s journey and personal growth after a very traumatic event that affected them both deeply.

These two characters are Lexie and Bobby.

Both lost Cody, Lexie’s fiancée and Bobby’s best friend, while he was on the cusp of his life, chosen to play for a major baseball league while he was still in college.

This loss happened more than one year and a half when the book begins and both are still utterly devastated.

Marissa wrote about grief with sensitivity and a keen eye for all the guilt, anger, anxiety and sadness it brings to loved ones.

Lexie is back at Suncastle Knights after having fled to her sister to grieve. Only, she is not finished grieving, far from it! Coming back to the house she shared with Cody, with all his pictures on the wall is eviscerating. This is killing her and she does not believe she is strong enough to resume her life.

Lucky for her, Bobby, Cody’s best friend, is determined to take care of her, support her and give her what she needs to get better.

Bobby is bearing an enormous guilt about Cody’s death and an endless sadness. He is convinced he could have prevented this and if he would just have acted differently, Cody might still be alive and Lexie would still be happy and…

That sadness is eating him alive. Combined with past and present secrets, Bobby is hurting so deeply that he has self-destructing behavior.

This is enhanced by his love for Lexie. He has always loved her and for as much as he wants to be with her, he does not think he is worthy of her love.

This is a recurring theme in the book: being unworthy. And how these feelings, that perception we have of ourself can lead us to arm ourselves in some ways or at least, deny us from any happiness.

Bobby was an admirable young man but he was so hard with himself!

Rising baseball star, he was also bisexual in a profession where it is frowned upon. He also comes from a small and very Christian town where it was unthinkable to announce that you were gay or bisexual.

Bobby will always work hard to keep his secret. And the secret that Cody confided before dying.

Yet, even under all that guilt, Bobby will always be there for Lexie.

It was admirable how he listened to her, encouraged her to follow her own path, to find happiness, to let her own guilt in the past.

Ten years ago, I wouldn’t have been able to read that book.

I was traumatized and could not read a book with that topic.

That’s how I can say that Marissa did an extremely accurate job to describe the “working” of that disorder. How the people suffering from it just want some control back in their life, even at a high price. Even when death can follow.

The author also did an amazing job talking about grief.

I know that intimately as I lost my dad more than two years ago. Even if every people experience grief in a very personal way, I found the guilt, the questions, the anger and finally the acceptance in this book.

Last but not least, it’s a queer college and indeed bisexuality and homosexuality are the backbone of this story. Once more, we see how narrow-minded people can truly hurt physically and emotionally people whose sexual preferences differ from their norm.

I found it so unfair that Bobby had to hide who he truly was if he wanted to have a future in professional baseball. If he wanted avoiding being gossip fodder for the people in his town.

As you can see, many heavy but “real life” topics in this story but Marissa J Gramoll treated them with intelligence and sensitivity.

-first the dialogs between the two main characters used formulas like “shoulda” “I gotta get” “assumin’” “wanna” etc.

I get that these are young people from the South and that’s probably how people talk in real live but…this bugged me. Not so much as to deter me from the enjoyment of reading but enough to prevent me from giving it five stars.

-second: this is a character driven story centered on a character’s growth and personal journey.

That means that it’s not an action story with a fast pace etc. I get this and for the most part, the author did a splendid job. BUT I would have loved a change of pace at some point in the book. Just to give the reader a jolt and keep the attention and interest. We get that event but very far along in the book. I think that another one around 40% or halfway through the book would have been like the cherry on top.

To sum it up, A game like Ours is a very impressive first work tackling lots of sensitive topics with intelligence and sensitivity.