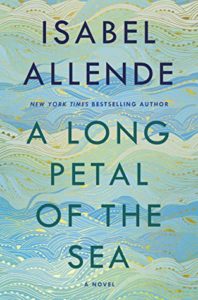 In the late 1930s, civil war grips Spain. When General Franco and his Fascists succeed in overthrowing the government, hundreds of thousands are forced to flee in a treacherous journey over the mountains to the French border. Among them is Roser, a pregnant young widow, who finds her life intertwined with that of Victor Dalmau, an army doctor and the brother of her deceased love. In order to survive, the two must unite in a marriage neither of them desires.

Together with two thousand other refugees, they embark on the SS Winnipeg, a ship chartered by the poet Pablo Neruda, to Chile: “the long petal of sea and wine and snow.” As unlikely partners, they embrace exile as the rest of Europe erupts in world war. Starting over on a new continent, their trials are just beginning, and over the course of their lives, they will face trial after trial. But they will also find joy as they patiently await the day when they will be exiles no more. Through it all, their hope of returning to Spain keeps them going. Destined to witness the battle between freedom and repression as it plays out across the world, Roser and Victor will find that home might have been closer than they thought all along.

A masterful work of historical fiction about hope, exile, and belonging, A Long Petal of the Sea shows Isabel Allende at the height of her powers.

Thanks for the free book, @PRHGlobal/@prhinternational

This was my first book by Isabel Allende, sent by the publishing house @prhinternational. A big thank you as I could discover a new author!

Isabel Allende seems to be known for her magical realism but this book is a “pure” historical fiction.

It took some time to adjust because the writing focuses rather on the historical events rather than the inner feelings of the characters.

As I am first and foremost a character driven reader, I had to adapt and experience the book rather like an opportunity to learn the many interesting facts about these periods in time than live it like a study in character.

As a result, I could read about their suffering without being overwhelmed by emotions.

It was an enlightening experience about regarding the political events in Spain (the civil war) and in Chile. Isabel Allende gave me details that none of my history classes in high school had ever provided.

We follow mainly Victor Dalmau and his wife Roser. They will be joined by side characters, playing more or less important roles in this family saga that spans from 1936 to 1994.

The opening was probably one of my favorite parts of the book, when we saw the young Victor perform something that was close to a miracle on a wounded young soldier.

It will shape his future.

We will follow him during the civil war, when he takes care of the wounded and lives on few to no sleep at all. Driven by his mission to save lives. It was really interesting to read about the conditions the soldiers, doctors and nurses lived through. Isabel Allende did a fantastic job making that dark period alive for the reader.

She did not spare any details, even when Victor’s brother, Guillem who was a soldier, came back home so thin and feverish, suffering from typhus. The war left people with little food and his mother with Roser had to sacrifice the little they had to buy two live chickens, carried on the bus under Roser’s gown,  and hide them in their appartment to feed Guillem some fresh eggs.

All these little facts made the story alive like none history book could!

Roser came from a very poor family and will be “adopted” twice in her life. First by a wealthy man who will encourage her passion for music and later, by her music teacher and family. She knows her own mind and throughout the story will always follow her heart, disregarding conventions.

She was a strong woman, talented but it was hard to connect with her despite the ordeals she went through, probably because she was so strong that she kept me at arm’s length.

The story will follow their journey when they’ll be united out of necessity and flee to Chile to build a new life. They grow individually and together, learning to trust and rely on each other. Love will grow but it will be a very slow burn.

Both will love others, both will be burned by love but the one constant was their bond.

What surprised and  interested me deeply, even more than the political events, were Victor’s progress in medical training and how he came to learn his “craft” from the war field to university. I am more a scientist than a politician and learning about the breakthrough in the cardiology field had all my attention.

I can’t end this review without talking about Isabel Allende’s beautiful and elegant prose. It was a real treat to read her exceptional storytelling all while being educated on these historical events.

With few dialogs, focusing on the many historical events, this book is perfect for reader looking to learn more about these troubled times through a family saga, destined for fans of History with a big “H”.

Born in Peru and raised in Chile, Isabel Allende is the author of a number of bestselling and critically acclaimed books, including The House of the Spirits, Of Love and Shadows, Eva Luna, Paula, and In the Midst of Winter. Her books have been translated into more than forty-two languages and have sold more than seventy-four million copies worldwide. She lives in California.

Have you read Isabel Allende’s books?