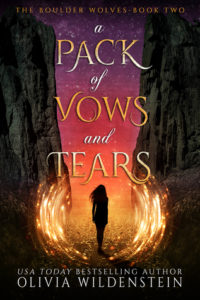 In the seductive follow-up to A PACK OF BLOOD AND LIES, Ness Clark’s heart and legitimacy are again put to the test.She thought the fight was over but it was only just beginning.

Ness Clark’s place amongst the Boulders and at Liam’s side is compromised. First, when her cousin claims Ness helped him elude his death sentence. And then, when August Watt, Ness’s childhood friend, comes home to Boulder.

Although August’s plan was to pledge himself and return to active duty, he finds himself incapable of leaving. This becomes problematic for Liam and Ness, because a mating link has clicked into place between Ness and the ex-marine. If not consumed, the link will fade, but that’ll take months. How long and hard can two people fight a physical attraction that renders their bodies unreceptive to anyone’s but their mates?

Ness is tired of fighting, tired of having to prove herself worthy of her pack’s trust and of her Alpha’s affection. But when an enemy pack arrives and threatens the Boulders, she has two choices: step aside and let the wolves who have pushed her away fend for themselves, or step up and help them fight the newcomers.

Ness has never stepped aside…not for anyone.

Why would she start now?

“If you kiss me, then you can’t leave,” he murmured. It took me a moment to make sense of his words. “Why not?” “Because you can’t feed a starving man, then take away his food.”

2,5 stars for some personal pet peeves

6 stars for the author’s reaction!

I know this is an odd rating but I will have to give nuances and explanations in this review.

First of all, I loved the first book “A Pack of Blood and Lies” and I was really happy when the author offered me the opportunity to read the second book in the series.

I am still captured and enchanted by the pack intrigue, the twists and turns in the story and the secrets that keep piling.

I think Olivia Wildenstein knows how to keep her reader’s attention and feeds us with some tidbits of information to keep us guessing at the global picture.

You are never certain who is lying and who is telling the whole truth, nor who really is the villain or if the villain maybe had a reason to act badly and should maybe be forgiven.

The writing is smooth, fluid and you never get a dull moment in that story.

I encountered two of my biggest pet peeves in that story and it really affected my rating: love triangle and manipulation.

I will detail this later because I want to take a moment to praise Olivia’s reaction when I contacted her about my predicament.

I knew that I would not write a stellar or really positive review because of said pet peeves. I am a reader and a reviewer led by her emotions and if said emotions are negative I can’t honestly write a very positive review.

That book being an ARC and the promotion of the book being part of a blogger’s life, I contacted Olivia to explain why I could not give a five or four stars and asking her if she wanted me to delay the publishing of my review.

I would post it as I swore to be always honest with the readers but I am also respectful or authors and did not want to jeopardize the book’s launch.

And that’s when Olivia told me that I could publish now and that she perfectly understood that the book could not please everyone.

We even got to chat about my issues and she explained her reasoning and choices, something that I really appreciated and helped me to understand!

Kudos for Olivia here as I have heard so many stories of authors attacking or even harassing reviewers who published mixed or bad reviews. Every time I find it really unpleasant and a book can’t please everyone. That’s just impossible! And as long as the reviewer is respectful, he or she is entitled to express an honest opinion!

So, I am here today not only to review the story but also to tell you that Olivia truly is a great person and a good sport!

It happens sometimes but it really depends on different factors and “A Pack of Vows and Tears” had me shouting murder! The love triangle is between Ness, Liam and August.

I am obviously rooting for one of the protagonists that I think is perfect for Ness, especially when the other one really disappointed me here.

I just wanted to make Ness SEE who was perfect for her and why could she not realize it? It was obvious? And why did he have to suffer? And ….

You get it I was really frustrated. Which in itself shows that indeed Olivia can write a story and incite extreme feelings in her readers LOL

My second pet peeve is manipulation.

Rather when a main character, here we speak about Ness, is always falling for what that someone tells her even when he did mistreat her or made hurtful comments or ….

I admired Ness in the first book as she fought all these males and gave us a display of “girl power”. In this sequel when I was under the impression that she just was manipulated and fell for it I was infuriated! Where was her backbone? Where was kickass Ness? Why did she believe this and gave it a second try and ….

Why didn’t I stop reading then? Because that book does have many assets!

Because the plot and the story is captivating.

Because the writing is good.

Because secrets are piling up and mysteries have to be uncovered.

Because I wanted to know what will happen.

Because I hoped that Ness would make the right choice (as in choose who I rooted for of course!) and find her backbone again to kick some ass and leave him at the curb!

Will I read the third book?

Without a doubt, especially after my discussion with Olivia about the reasons she wrote the story in such a way (reasons that are included in the final version but not in the ARC that I got) and about Ness’s future in the third book (she did not give me spoilers thank God but hinted at some development that should please me….hopefully).

Do I recommend this book?

Do you love shifter stories? How do you write reviews for books with some of your pet peeves?