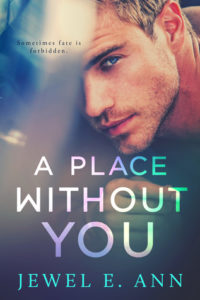 The Law of Henna and Bodhi:
When love breaks, fall inward, fall together, and fall hard. Then let time pick up the pieces.Everything feels temporary when you’ve experienced tragedy—until Henna Lane meets Bodhi at a music festival.Young and spontaneous, they have a lust for seizing the moment, falling hard and fast.When Bodhi is forced to leave without a goodbye, Henna thinks she’ll never get over him. But then she meets Mr. Malone, her sexy, new guidance counselor.They are reckless.
They are forbidden.

When their secret is discovered, Henna has to choose between finishing school—banned from seeing Mr. Malone—or dropping out to follow her nomad dreams.

Over time, she learns that life is not a destination or a journey, some things are more than temporary, and the forbidden can never be ignored. But if she returns for him, will he still be hers?

A Place Without You is an emotional story of young love, shattered dreams, and impossible decisions.

At the time I am writing this review I am beyond exhausted. I had a very tiring and unusual week that’s left me emotionally exhausted.

The irony of it is that what Bodhi’s dad is battling with, the choice he made is exactly what went with my father in this past week. Exactly the same and I won’t give spoiler.

Let’s just say that my beliefs and reactions were not the same as Bodhi and his sister. I had a hard time understanding their reaction.

It had me angry and wanting to shout at the siblings as I thought they were selfish in their own way.

Yet they wanted to do good but you know that saying about Hell and good intentions right?

So anger and deep understanding were my first emotions while reading this book.

Not only did Jewel write about something deeply personal and fresh in my mind but she also portrayed the kind of character that I have huge difficulties to connect with: drug addicts or more accurately here pothead.

Drugs and addictions are a big trigger for me in books.

I avoid reading books with the MC being an addict like I would avoid the tax collector: fleeing.

Yet Henna is dealing with her constant pain using weed to mute her suffering. Medical marijuana they say.

Can you see my predicament and conflict? I hate junkies for personal reasons linked to my early teenage years yet I could not fathom the constant pain she must face every day.

My dad suffered daily after being amputated from one leg. The surgery went wrong and he tried not to take too many pain killers yet he could not stand the unrelenting and ever present suffering. What made marijuana so different from other pain killers that my dad took daily? Nothing.

I was put between a rock and a hard place forced to overlook my aversion for addicts because I had no other choice than to understand Henna’s choice.

Conflict, confusion and commiseration three other emotions this book made me feel strongly.

Talk about a very personal journey while reading this story!

But if Jewel writes about hard topics she still has what I would call her “signature”: her own brand of craziness and humor. Henna was bold, free. She had a devil may care attitude and she was just perfect for serious Bodhi. She was his light, his breeze of fresh air. The Yin to his Yang.

It produced an arresting mix or grave and light, serious yet fun, despair and hope, stability and adventure.

But you will say, what is that book about?

To sum it up it’s about girl meets boy at Coachella. They are in their timeless bubble for a few days.

When real life comes back to bit their behind they meet again but their attraction and love story is forbidden.

Girl is determined to still be in boy’s life and will push and push to earn her place.

Only …boy does not think he deserves girl. He is anchored to earth, weighted down by some tragedy he caused years ago. He wants to set girl free. Urge her to find someone better.

You have fated love then separation and heartache. But you’ll get a second chance yet …nothing will be simple. Is a third chance too much to ask for?

This is first a character driven story. And you will love these flawed characters. They make or made mistakes but that does not mean they are bad, just that they are human.

You will have conflicted feelings, hope for redemption yet guilt will be a constant companion.

You will also have some choices that might hurt your beliefs. But these will make you think. Really think about the right choice that is not always the most common choice.

Have you read this author before?