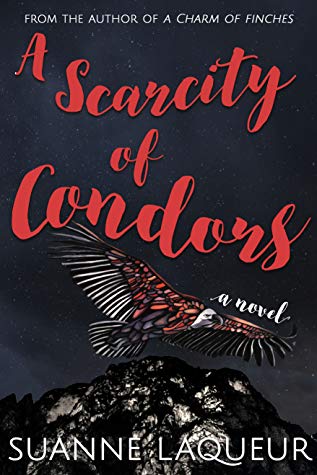 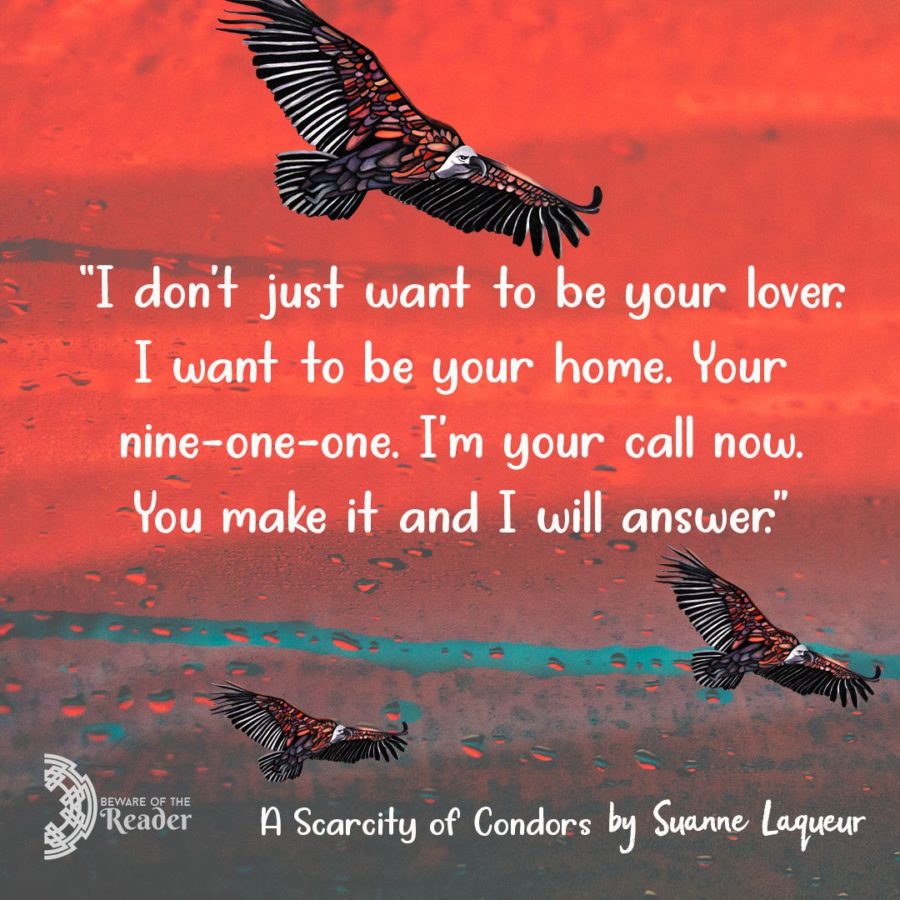 WARNING: extra-long review ahead! So, if you like to have the gist of it, just read the sentences in bold. My excuses but as usual it seems that I am unable to write short reviews for Suanne’s books!- if I want to give them justice!

Once again, I am amazed at Suanne’s writing skill! In French we would say that “Elle a le sens du phrasé” what I can tentatively translate in English with a lengthy explanation meaning that she is a powerful writer.

Not a writer using many flourishes but a word magician who only needs few words to convey a deep meaning. I don’t know how many times I stopped my reading to think: “Wow! OK! Pause now because there is a thing here.”. I couldn’t resist reading some of these sentences to my son who probably politely listened to his mom when she said “See? See how deep this is? See the mastery? Do you see?”.

And yet for as much as I loved that book I did not fall right into it, and that’s a first for Suanne’s books! I even messaged a friend, busy reading it, calling for help!

After a long chat we both came to the conclusion that the back and forth in time, the “holes” in Jude’s story between teenage years and adulthood as well as Jude being so closed off after what he lived was probably the cause.

In Larks and Finches I was hurting with the characters right from the start. Suanne “showed” rather than “told”. That’s not what happened here …at first!

The story really kicked in once the Tholet’s family had their DNA results and Jude unraveled!

Now rewind: what is the book about?

This can also be qualified as historical fiction as we get back to 1973, following Cleon Tholet, Jude’s father while he was imprisoned and tortured at the Villa Grimaldi under the Pinochet Regime. How Cleon coped, the world he built to shelter his mind when faced with torture reminded me of Geno’s coping mechanism if you have read “A Charm of Finches”.

The main character of the book is Judeon Tholet or Jude but the side characters take such an important place that I’d like to say that the Tholet family was the main character, lovers included. When you get one Tholet you get all Tholets. They lived through tragedies and are just so closed knit that you can’t simply talk about Jude alone.

Jude is now thirty-six in the story but we’ll get a look into his teenage years. When he discovered that he was gay. When he experienced an intense first love that ended up in tremendous pain and drama as he was victim of a hate crime.

I had the privilege to read a very early beta copy of this story and I can tell you that the general idea aside, it has nothing to do with that first draft. What Suanne wrote here about discovering that you are different, about playing a role not to be outed and bullied was brilliantly done.

What I respect above all else with Suanne’s writing is that she’ll never sugarcoat anything. She’ll cut to the chase and will go to the realistic, nitty gritty details. How Jude and Feno learned to have sex, with all the clumsy and painful first attempts when you are gay. What it took to “ease the process”, everything! And that, Ladies and Gentlemen, makes her writing TRUE!

These are all the information that will have you walk in the shoes of teenage Jude. He was so in love! And that will have you get back into your shell because when everything will come crashing around you, you won’t trust anyone, your family aside.

Jude will be surviving, making by, but he won’t really live as he does not dare to open up and be vulnerable again.

The first trope in the book is about Jude, discovering his sexual identity, getting hurt and years later, wanting to really live again.

I just would like to add something about his relationship with Tej.

I think Tej is a very worthy hero. And I’d like to draw a parallel with Jav and Finch. Jav is an artist, a creative, a writer. Jude is a musician. Finch is a healer of the soul, a therapist. And Tej is also someone who helps people as he is a dispatcher for EMR. Tej might be cockier than Finch though but the dynamic was just as perfect as for Jav and Finch!

The second trope is about piercing Jude’s birth mystery. Because when the Tholet family took this DNA testing their world exploded. Jude was not the biological son. But whose son was he? And what happened to Penny’s biological son?

That part was equally thrilling as we want to find answers and heartbreaking as Penny was appalled, Cleon was distraught and Jude was … lost.

Can you imagine for one second discovering that your son is not the one you don’t recall giving birth to because you had been hit by a soldier and suffered from a concussion? There is this huge blank in your head and you just can’t recall anything! Is there a mother somewhere weeping for her biological son and wondering what happened to him? And what of your own kid?

These characters suffer, doubt of their loyalties, their roots, their identities.

The third trope is about the political and historical events. In my history classes, nothing much was told about Pinochet’s regime. Granted it was still recent but this book shed a dark light on the atrocities committed under his regime.

And once again, it made me think.

I know that this review is already long but get ready to veer off literary course and delve into politics.

This year I have read many books about WWII, the last one being “The Tattooist of Auschwitz” by Heather Morris. Recollection of atrocities made to the Jews, the homosexuals, the …. were plenty and appalling. I knew of these already.

I have read “The Fountains of Silence” by Ruta Sepetys. The topic was Franco’s regime, its torture and how he stole babies from his opponents to give them to allies, without anyone aware of it. What happened under his regime, his tyranny was unthinkable.

A Scarcity of Condors unveil Pinochet’s horrors. His torture. The army’s despicable actions.

And I am wondering: when will men learn?

I think what Suanne wrote here is of tremendous importance.

I read to entertain, to escape but I also read to learn.

I think a book like this should be read by every kid, every teenager, everyone. Forgotten, history will only repeat itself. People are easy to manipulate in time of hardship. Crowd can be deceived. Find them a common enemy, reward some high ranking judges or military men and you’ll soon be able to rule as you’d like, imposing a regime of hate, fear and mistrust. We have contemporary examples aplenty.

I believe that educating people, opening their eyes to the past’s atrocities is the only way to avoid a repetition.

Because with war and civil wars come the question of the refugees. The Tholets had to flee. But Tej’s family also had to flee Lebanon when the war began. After awful losses too.

The refugee’s crisis is closely linked to wars, to climate changes.

What Suanne showed us here, is not only what causes these migrations but, with Tej’s hospitality, with Peny’s fight to welcome the Chileans refugees, she also showed that these people coming into “our” lands have lost everything and should be welcomed instead of hated. Again, a very hot topic woven in this story!

Sorry I know this review has been extra-long and that I probably lost many of you in the process! Suanne Laqueur has once again demonstrated that she is a force to be reckoned. A powerful writer able to embark you on the cathartic journey of her characters. She will make you suffer. She will sometimes make you blush and cringe. She will open your eyes. She will make you cry. But she also will make you rich with human knowledge.

The condor of the teaser is from the draft cover of A Scarcity of Condor and I suspect already due to the talented Tracy Kopsachilis, Suanne’s cover designer!

I highlighted non stop so I’ll share some of my favorites here with you:

“Sensing he was different in a potentially hazardous way, he kept to the fringes of school society, achieving a delicate balance of popular invisibility.”

“Maybe I’m ready to let my house be a home.”

“My everyday life is rich but my love life is a third-world country.”

“This angel wasn’t a cherub with a halo but a seraphim with a sword. An avenger. Fighting for people’s lives, then coming home broken and bruised, singed feathers dripping behind. Too tired and used-up to even fold his wings back down.”

Have you read Suanne’s books? Do you have some favorite and powerful writer to recommend?