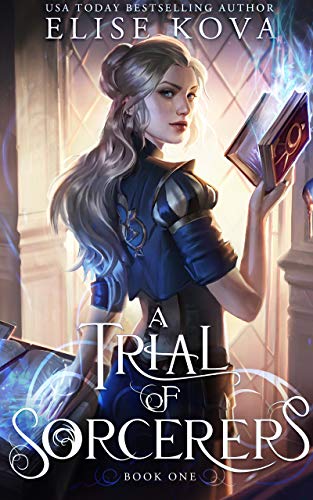 Ice is in her blood.Eighteen-year-old Waterrunner Eira Landan lives her life in the shadows — the shadow of her older brother, of her magic’s whispers, and of the person she accidentally killed. She’s the most unwanted apprentice in the Tower of Sorcerers until the day she decides to step out and compete for a spot in the Tournament of Five Kingdoms.

Pitted against the best sorcerers in the Empire, Eira fights to be one of four champions. Excelling in the trials has its rewards. She’s invited to the royal court with the “Prince of the Tower,” discovers her rare talent for forbidden magic, and at midnight, Eira meets with a handsome elfin ambassador.

But, Eira soon learns, no reward is without risk. As she comes into the spotlight, so too do the skeletons of a past she hadn’t even realized was haunting her.

Eira went into the trials ready for a fight. Ready to win. She wasn’t ready for what it would cost her. No one expected the candidates might not make it out with their lives.

This is the first book in a young adult, epic fantasy that’s a tale of competition, coming of age, distant lands, elemental magic, and romance. It’s perfect for fans of the Legend of Korra, Truthwitch, and A Sorcery of Thorns.

I read it in nearly one sitting and was very surprised to enjoy it so much!

This had so many of my favorite ingredients:

-a contest. I love competitions in books. Seeing the protagonists hone their skills, try to be better and to outsmart other competitors is always thrilling!
Especially when they are outcasts like Eira was! Shunned by her peers for years following a tragic incident, bullied and put in her big brother’s shadow.
So of course I had to root for her.

–magic and magic school. The tower is where sorcerers are apprentices and learn to master their magic.
Magic is always fascinating as I secretly believe maybe one day, I’ll have some! Now that’s wishful thinking LOL
The magic system was not revolutionary but was interesting nonetheless with the classical elemental magic. Waterrunners, Groundbreakers, Windwalker and Firebearer.

–a hint of forbidden or at least secretive romance that potentially could also have a love triangle but was not fully developed.

Eira is a sorceress, a waterrunner, and apprentice in the Tower. She is heavily protected from bullied by her big brother Marcus and longs to not be his burden to bear any longer.
Eira has always been fascinated by the kingdom of Meru, far away and inhabited by Elfins.
So when Meru’s embassador arrives and a contest of magic is announced to select the best apprentices to go compete in a big contest on Meru, Eira just HAD to enter.
Even if it went against her family’s request.

She just wanted to show them that she didn’t need the protection of Marcus any longer and that he could be free of his duty, free to shine!

But soon she’ll want to win for her. To show everyone who had shunned her her true worth.

Only …things get a darker turn and become deadly.

I really loved Eira. She was brave, smart even if she didn’t see when she was used and will pay for it.
She is not a pristine heroine as she has something dark lurking in some dark corner of her mind. She does the right things but we feel that she could be tipped of at any moment. That added a tension, an expectation to my read as I wondered if the heroine would turn into a villain.

You also have secret passages, echoes of past conspiracies, betrayals and …friendship.

That was a fast paced and very enjoyable read happening in a universe filled with magic.
I can’t wait for the sequel! March 2022 it says…