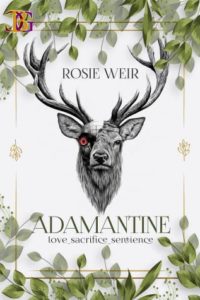 Deep in the Appalachian Mountains, a brilliant scientist and his daughter retreat from a catastrophic global plague. Worried for Molly’s future, James crafts the ultimate gift for his lonely little girl: A sentient AI charged with the task of protecting her and keeping her company in the event he is no longer able to do so. His creation, Will, is bestowed with an expansive intellect, superhuman strength, and a fierce protective streak. However, as year go by, Will’s feelings start to change from duty and service to something more.At eighteen, Molly knows little of the world beyond a collection of grainy VHS classics. Life with Will and James is idyllic. But Will’s mission to protect involves keeping dangerous secrets, including some that could destroy the trust between them forever. Will struggles with the rigid self-discipline of his programming, versus turbulent, irrational feelings that grow stronger each day. True love can’t exist without honesty and risk; the two things Will has been programmed to control at all costs. But trouble is brewing outside their sheltered utopia, and ignorance might be a luxury neither of them can afford any longer.

From the primitive heights of the Appalachian Mountains to the revolutionary scientific breakthrough hidden within, Adamantine, a story of love, sacrifice, and sentience is scheduled to be released in June 2020.

I hate to give three stars to a book especially when I read a new author. Because these three stars say that I liked the book but also that I was looking for more.

Let’s try to be structured here and sort between the good and the “I wanted something more”.

I thought I had this book figured out and where the plot would take us but as I reached around 40% of the book, there was a catch and an interesting plot twist!

Then, even further in the book, another big plot twist!

Not many romance books talk about AI and androids. I don’t know enough about artificial intelligence to know if everything Rosie Weir wrote here is accurate but if it is, she did an amazing job researching everything.

You also have the big question of what makes a human human, of the soul and of what is love and what are emotions. Can a machine like Will genuinely love another being? If he feels and hurts, does that make him human somehow?

Will is handsome and if he has the body and intelligence of a grown man, he’ll have to experience and feel the world like a toddler and grow into his emotions. I really like the idea of an AI able to write his own code and determining who he wants to be.

Will’s creator James gave him free will and that reminds me a lot of God’s decision to grant free will to humans!

The “I wanted more”

–The characters or rather, the connection with them

I can’t put my finger on what exactly did not work as I hoped but I could not totally connect with the characters. Yet they had a personal growth, their blossoming feelings was lovely to witness but …something prevented me to really walk into their shoes.

Molly is rather young and naive in the beginning but that fits with her persona of having been raised in the woods, far away from any human except her father and her only companions an AI, a dog and some roosters. She has been sheltered all her life and writing her any other way like a sophisticated girl for example wouldn’t have rang true!

She still made me laugh when she discovered some “special” book in a bunker and it was really well done as a scene!

-The path that novel followed past the 65% mark.

It was a little bit too much, too extreme for me and that’s when the author lost me. It became too “science fictiony” if I may say so.

All in all, you can guess that you have the birth of a love story, very insightful questions about feelings, soul and what makes us able to love and interesting twists that will launch the story into a totally unexpected direction! If you are able to fall into these character’s life better than I did, I think your read will go from pleasantly interesting to very enjoyable!

Do you love books with AI? Or science fiction?