He was the myth and the legend of our small town. But no one knew the truth… except me.

Him
He’s possibly as damaged as I am. Maybe even more. Scarred just as much on the inside as the outside. Just like me. He doesn’t speak. He doesn’t smile. He hides in the woods like an animal. I should be scared of him. But I’m not. He’s the only one that has ever made me feel. And I want to make him feel, too.
Everything.. 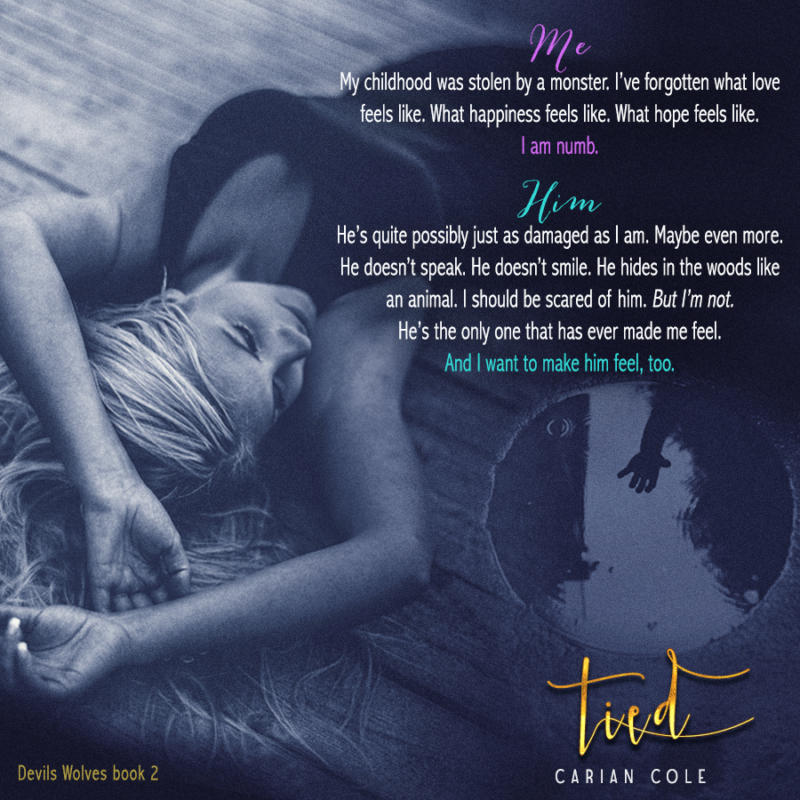 I love Carian Cole’s stories. She can feature either perfect or broken heroes meeting their ideal female counterparts. She gives us sweet romance stories spiced up with some (bearable) angst. As Carian is a real animal lover she always features some pet to my great delight.

I’ve read and loved Torn, the first Devils Wolves book. I was intrigued by Tyler, the broken and elusive savage of the family and could not wait to read his story! I wanted to know what happened to make him so wild and weird shunned by the whole town. I love few things more than books with a broken hero finding his salvation. As you can guess I had great expectations for Tied. Maybe too much.

In Tied gave I learned what happened to him to make him a recluse. He also met his perfect match in Holly a very loveable heroine. Add to it two pets instead of one: a fox and a puppy I should have been in heaven.

Certainly because of my too great expectations but also as I would have expected something else given the beginnings of the story.

Within the first pages we are thrown into dramatic circumstances. Literally sucked into the story. Tyler discovers a girl hidden with a puppy. They are in a hole in the middle of the forest. It’s obvious she’s been held captive and to free her he has to kill her abductor. She is scarred mentally and physically, malnourished. Holly has been captured ten years ago forced into seclusion and abused by her kidnapper.
Tyler is seen like the local addict, the weirdo. Instead of being congratulated as a hero he is thrown into jail. The police officers believe him to be her abductor!
Very intense and promising beginning right? That’s what I thought. I was utterly capivated by the tone of the story!

Holly has been so isolated that she’s never learned anything and had no chance to have a normal childhood. Many things can trigger a panic attack. The only way she endured her inhuman ordeal was reading her fairy tale books. I loved the “power of books”! They gave her hope. She’s always known her prince would come and free her. Tyler severely scarred, burned and tattooed is her prince. She is determined to find him again but her parents chose to send Holly to a special facility dealing with victims of abuse.

One year later they meet again. As much as Tyler tries to discourage her to come back Holly is determined to befriend him. Not easily discouraged she will help Tyler to fight his demons and he will help her as well. It was obvious based on their traumatic pasts that they were the perfect match. 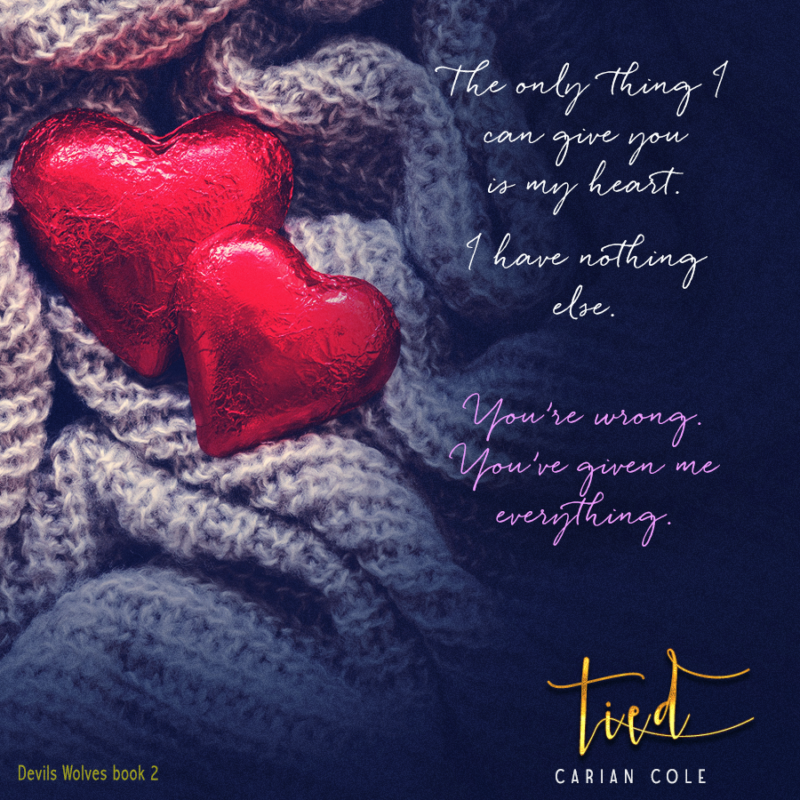 I loved Holly as she has been abused but is determined to be her own independent person. She wants to take fate in her hands, to face her fears and overcome them. She also retains some innocence and was refreshing compared with jagged heroines.

Tyler…came as a jackass in my books. As much as I love broken heroes his trip in guilt land became tiring as he needed a very long time to pull his head out of his @ss as his brother said. I could not help comparing Tyler with Vandal from Ashes and Embers another broken hero. Vandal was broken and twisted. He has some kinks but …let’s just say Vandal is a better fit to my love story with broken heroes. Unfair for Tyler? Certainly but life’s not fair!
On the other hand I’ve never been in his shoes. Maybe after what he lived I would be bratty. Maybe I would become a hermit and be riddled with guilt. Maybe I would snap at everyone trying to help me. Maybe….
What I did love was his care for animals and his little Christmas tradition. He also made Holly feel capable. That’s a huge plus point. 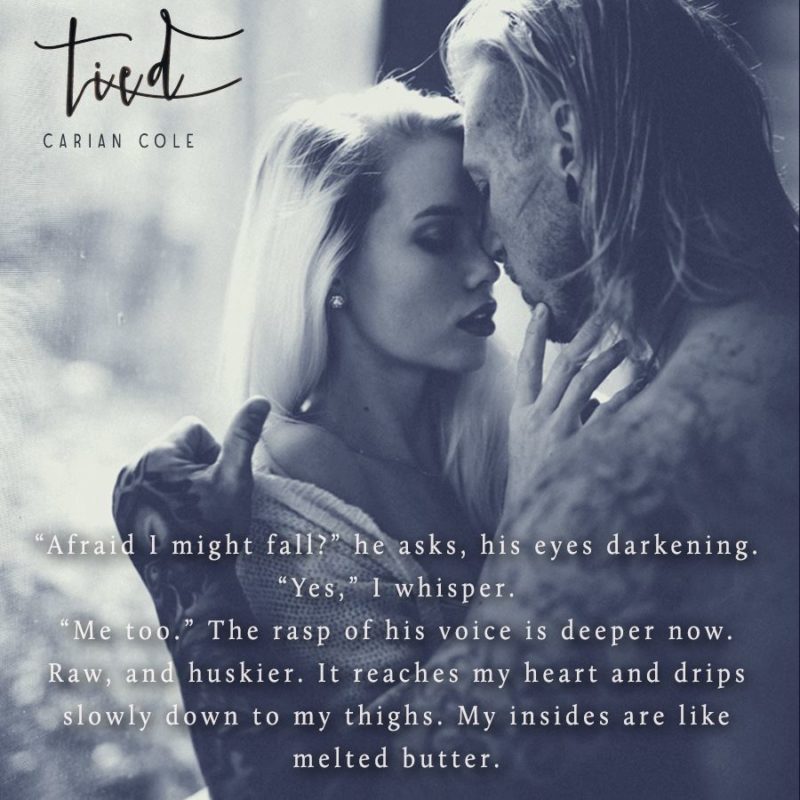 Now to get to the crux of my unmet expectations: I would have loved reading more about the abuse, PTSD, etc. Carian did not exactly brushed it under the rug, far from it but there was a little something missing for me to really feel overwhelmed by the story. Give me flash backs with sweat and galloping hearts. Give me torture sessions (maybe not so graphic but …). Give me…
I think Carian made this conscious choice to rather focus on the romance and healing of two damaged souls than to delve into post-traumatic stress disorder. In this she is true to herself and I respect her choice. But I can’t help feel like the traumatic experience is only used as a prop for the love story and hasn’t been exploited to its full potential.

Anyway these are my personal expectations and tastes. I know Carian fans won’t be disappointed with this story as she once more delivers her magic touch. A sweet sometimes angsty story about two lost souls helping mend the other.

Oh and just to be clear: I love Carian Cole as an author and certainly as a person. She is one of the most caring and generous souls I know and my love story with her books is to be continued.