Tamika Cleary takes a wrong turn up a one-way street—and straight into Thibault Delacroix’s leg as he steps into the road. But Mika’s in a hurry, and she certainly doesn’t have time for a guy who can’t even look both ways before crossing, even if he does have a cute face, a body to die for, and the darkest, thickest eyelashes she’s ever seen.

Unfortunately for Mika, fate has other ideas. When she’s threatened by her employer, a Russian mafia boss known as “The Thief”, she’s forced to accept Thibault’s help. As the co-owner of the Bourbon Street Boys security firm, he believes he can keep her safe. But Mika has a whole load of trust issues—and the pushier Thibault is about helping, the more stubbornly she tries to resist.

Mika may have taken a wrong turn the day they met, but will she finally let someone steer her in the right direction? 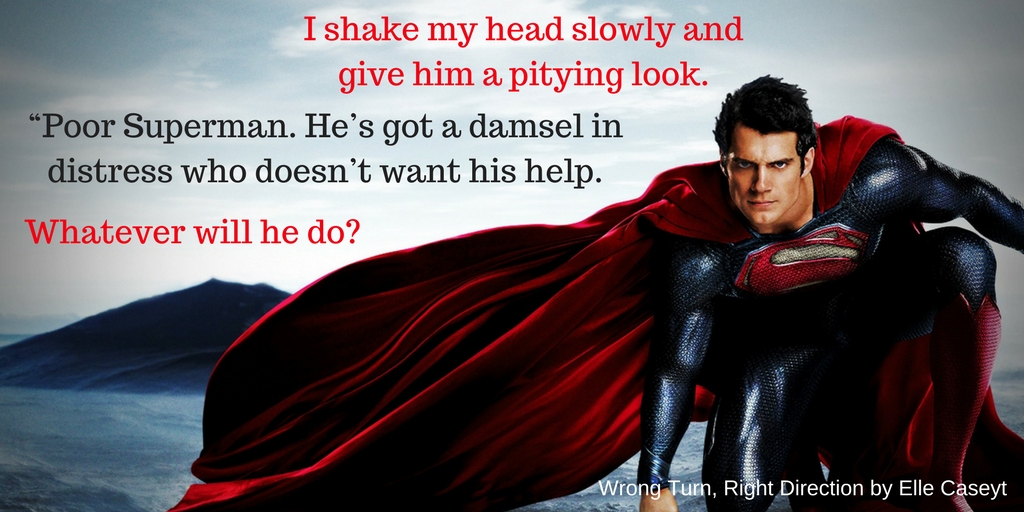 “I hit you with my car! It’s not like you chose to be around me or involved with me. It’s not like you know me. I’m just some girl who almost ran you over, and you’re just the distracted dummy who got in my way, right? So, what I don’t get is how I go from being that girl to this person you want to protect at all costs. It doesn’t make any sense! You should be suing my butt off, not protecting it.”

Let me begin with this: I love Elle Casey’s work. Shine Not Burn;  MacKenzie Fire; All The Glory; her series War of  the Fae and Clash of the Otherworlds have all been 5 stars. So clearly my rating has nothing to do with Elle Casey’s writing and talent in general.

It did just not work as I hoped for me.

This is the moment I’ll use variation of a broccoli analogy using carrots Jewlesy  (fellow reviewer) used not so long ago: I can eat carrots and even enjoy it as my mom raised me right and taught me to eat vegetables every day. But I do prefer chocolate to carrots.

Well this story was like carrots: if I did enjoy the book I did not get the same pleasure from my read that I got from the above mentioned Elle Casey’s stories.

It was not easy to love the main female character Mika and that’s the main part of my issues with the story.

Mika is a very strong, independent and stubborn woman. She had no alternative than to work for a Russian Mafia Boss, Pavel . Now she wants out as he is threatening her life.

She has no friends and mistrusts everyone. She has her reasons as she did not have an easy life but it’s difficult to connect with a character holding you at arm’s length.

One life altering moment and she will literally bump into Thibault, one of The Bourbon Street Boys.

Thibault realizes very soon she has serious problems, no one to go to and as he is a very good guy, he wants to help her.

Little did he know the damsel in distress had a fiery temper and a stubborn streak!

Mika was neck deep in problems but did not want to accept Thibault’s help before a very long time. I get you can have your pride and she had a difficult past but there’s a difference between being prideful and foolish! She did not have the luxury to reject his help and it took her a long time before begrudgingly accepting said help. I just wanted to shake some sense in her head. Not a good sign right?

“In a few hours he’ll be gone from my life, and letting him think he has any say in that is a mistake. I am the captain of this ship. I decide how it runs and where it goes. I don’t care how nice he is or how good he looks in the morning, he is not going to push me in a direction I don’t want.”

What was also a little bit unsettling: I did not know what Mika looked like. Either I’ve been terribly distracted in the beginning (it’s a possibility) either there isn’t any physical description of Mika. We know what Thibault looks like as well as the other side characters but Mika… not so much. Why?

I recon this is not mandatory in a book but given that I already had a hard time connecting with her it did not help figuring her out.

Their relationship was also somewhat hard to believe in. Why? Because Mika gave mixed signals. This is a romance book but Thibault was like an afterthought as a romantic interest. Yes she is ogling him, yes she says he is pleasing to the eyes but again she kept her distance. Of course she had other problems and priorities plus a mobster chasing her but it did not contribute to sort through their feelings. And it had nothing to do with a lack of steam or sex scenes as some books are hotter than hot without any real sex scene, just because the chemistry is out of the charts.

Enough with my issues! Let’s talk about what worked really well for me.

He honestly saved the book. He was pushy but the right kind of pushy as he wanted to help a damsel in distress. Even with one hurt leg he was also very resourceful and fully able to protect Mika with the aid of his team. You have to admire a man that even temporarily crippled has your back and can take care of you! Usually men are big sissies when hurt or ill but not Thibault. Respect!

–The side characters and their connections. This is the fourth book in this series and even if I haven’t read the other ones I did not feel lost. I loved reading about Thibault’s friends and family, how a great and efficient team they made. They’re tight knit and help without question asked.

-The last 30%.  That’s where everything happens that with the first 10% setting the story. Once Mika opened herself to Thibault and began trusting him it was easier to grasp and believe in their feelings, in their story, in everything in general. Twists and turns rain in the last part holding my attention till the end.

So will I read other books by Elle Casey? Certainly as I’ve loved her other works. Would I recommend this book? Well I would certainly tell you to make up your mind because my issues could not be problems for you.