One old farmhouse brought them together. It could also tear them apart.

Gigi has just uprooted her whole world to start a new life. The unexpected gift of a farmhouse in small-town Montana is just what she and her daughter need to escape big-city loneliness. The last thing she needs is attitude from the town’s sheriff, the most perfectly attractive and ruggedly handsome man she’s ever laid eyes on—and a complete jerk.

Jess knows all about women like Gigi. Beautiful. Sexy. Scheming. She’s stolen his sanctuary, the farmhouse that should have been his. But along with a face full of freckles, she’s got a sharp wit and a backbone of steel—something he doesn’t discover until after making a complete fool of himself. If he can earn back her trust and win her heart, he might just find the home he’s always needed.

Alert!!! Up and coming brand new author! Prepare to be amazed and to swoon over sheriff Cleary.

“I opened my mouth to ask what was going on but the words got stuck in the back of my throat. My brain short-circuited. All of my attention was focused on the man standing right in front of me. Seated on my stool, I had to tip my head way back to examine his face. I blinked a few times because this man was so ruggedly handsome I had to be imagining him. (…)

What catapulted him beyond any good-looking man I’d ever seen before were his eyes, light blue eyes flecked with white. Bright, like the color of ice. I had never seen such a hue before. Did they melt when he kissed someone, or did the ice become even brighter? “

you’re already drooling right?  Because I know that I did!

And if said man adds:  “Are you about done drooling over me so you can finish patching him up?” he snapped.”

What do you do? Well I squealed as I love a good hate to love romance with hot sometimes jack@ss  alpha heroes. 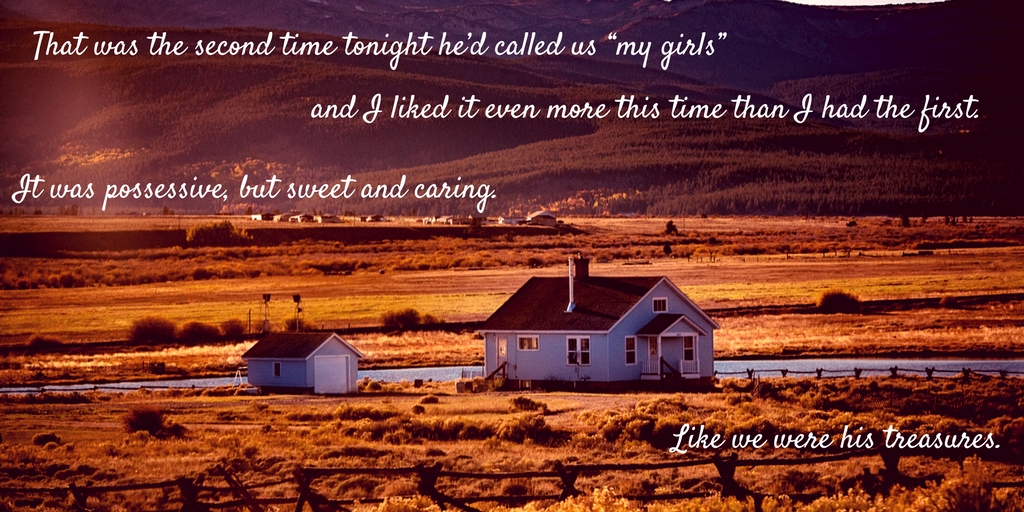 This book has all my favorite ingredients in romance stories:

-down to earth with a heart as big as Montana single mother:  Gigi (I even love her name! It has a “musical comedy” sound to it);

-some hot male sidekicks that I see having their own interesting stories in the future;

-robbery, hidden drug dealer leading Sheriff Cleary to mess with his hair all the time as he is really wants to protect his town.

And I’m also a sucker for small town stories. I love the tight knit community feel, the gossip, the support. Prescott, Montana (love that State) was no exception to the rule with its local gossiping men reunion and football entertainment:

“Let me educate you a bit about Prescott High sports. Everyone comes to see what everyone else is doing. Sure, we all cheer for the kids and hope they win, but that’s just the sideshow. We really come to see what people are up to, what they look like, if they’ve gained weight and who they’re with. It’s the second biggest gossip spot in town behind the Coffee Club.”

When Gigi moves with her little girl into Prescott, Montana, she expects to find a sleepy and secure little town. Little did she know she arrived in the middle of an enquiry running nowhere so far with the local sheriff trying to catch a drug dealer.  Beaten bodies, arson, … are hitting the small town.

She wanted to find a safe haven but certainly did not expect to meet the town sheriff in such arresting manner. Their first encounter is heated and you can guess a sizzling chemistry coming your way. The sheriff is a jack@ss and she won’t back down! I don’t know you but I love when the main characters have heated words. It feels like foreplay and you can imagine the passion between the sheets later on.

Once the misunderstanding is cleared up, Jess will be VERY determined to take care of Gigi and Roe. He’ll soon let her understand they’re “his girls”. I loved how bossy he was. I literally melted at the sight of Jess protectiveness towards Gigi and Roe. The poor man has been taking care of his mom, his sister and his town. He is a “take charge guy” but Gigi has been on her own making all the decisions for so long she is determined to be independent and not be bossed around by the hot sheriff. Even if he is kissing like a god and she is always instantly forgetting what they were arguing about. Eff! There goes her resistance…

What I also loved is in spite of their instant attraction they won’t jump in bed so quick. I do prefer a slow burn to instant consumption. Their relationship was hot but realistic. Gigi did not throw caution to the wind. She’s been burnt and she’ll take her time before trusting Jess. Her ex did really a number on Gigi and she’ll need some ego boost to believe in Jess’s interest.

Added bonus: these characters are flawed and make mistakes. Jess may have been a super-hot alpha he also was super dumb sometimes when he snapped at Roe after a bad day. It happened only once but it made for a relatable relationship as no relationship is always a smooth sail.

Finally if the plot was not extremely complicated a constant undertone of threat was present throughout the book and it kept me interested all along thanks to an evasive evil doer in town.

I’m now a fan of Mrs Perry’s writing and I can’t wait for her second book!