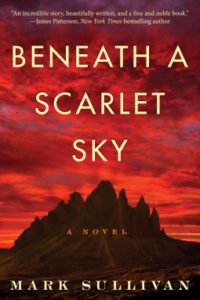 Based on the true story of a forgotten hero, Beneath a Scarlet Sky is the triumphant, epic tale of one young man’s incredible courage and resilience during one of history’s darkest hours.Pino Lella wants nothing to do with the war or the Nazis. He’s a normal Italian teenager—obsessed with music, food, and girls—but his days of innocence are numbered. When his family home in Milan is destroyed by Allied bombs, Pino joins an underground railroad helping Jews escape over the Alps, and falls for Anna, a beautiful widow six years his senior.

In an attempt to protect him, Pino’s parents force him to enlist as a German soldier—a move they think will keep him out of combat. But after Pino is injured, he is recruited at the tender age of eighteen to become the personal driver for Adolf Hitler’s left hand in Italy, General Hans Leyers, one of the Third Reich’s most mysterious and powerful commanders.

Now, with the opportunity to spy for the Allies inside the German High Command, Pino endures the horrors of the war and the Nazi occupation by fighting in secret, his courage bolstered by his love for Anna and for the life he dreams they will one day share.

Fans of All the Light We Cannot See, The Nightingale, and Unbroken will enjoy this riveting saga of history, suspense, and love.

I have tried three times to write this review!

I was so desperate that I asked on our Facebook Group for tips “when you loved a book so much you don’t know how to write the review”. Adding: “OK I am deep in the p@@p here! I’ve listened to Beneath a Scarlet Sky by Mark T Sullivan (so not romance I know) and it was …brilliant. Inspiring. Humbling. Heartbreaking ….I loved it so much that I am stuck between speechless and “word vomit” for my review.
So not hepful if I want to convince other readers to listen/read it!”

Basically it sums it up. I JUST WANT YOU TO READ PINO’S STORY!!!!

As I know this is not helpful or at least not enough to convince you I will try for the third time to organize my thoughts.

Let’s speak about my feelings and thoughts first, because that’s how you know a book is talking to your soul: you have that gut feeling!

First I am humbled and in awe.

Pino Lella’s story is a story of valor and extraordinary courage.

Throughout the whole book I was constantly thinking: ”What would have I done if I had been in his shoes?”.

I don’t know. Probably not because what the young Italian of seventeen, nearly eighteen years old did was heroic.

I forgot to breathe so many times when Pino was faced with impossible life threatening situations and like a magician pulled a rabbit out of his hat and saved his life and that of others!

I cried, many times. Because war comes with death. Death of innocents, of children, of friends, of beloved ones.

I just could not stop listening to the book! I even found excuses to do chores like gardening, walking the dog, anything to plug my earbuds and resume that extraordinary story! I think if I always find such wonderful stories my garden will for once be seedless this year!

Let’s rewind here and go back to the story. Just read what’s in bold if you want the short version because I have so much to tell as so much happened!

From the synopsis you’ve grasped that Pino Lella is a young Milanese that will turn spy and save countless people.

When the story begins we follow Pino on a beautiful night in Milan when he met a beautiful young lady at the bakery: Anna. He will be instantly smitten and brazenly will invite her to meet at the theater.

Anna will never come but he’ll go to the theater with his friend and they will escape unscathed miraculously as the theater was bombed by ally’s planes!

This sets the tone of the story as many times Pino skirted with death and should have died but by some quick thinking and twist of fate he escaped death’s clutches each time. To this day I can’t help think that Pino had a guardian angel. That’s the only way I can explain why he lived through all the dangerous decisions he made to save others.

His parents are frightened by the bombing of Milan and they will send Pino to Casa Alpina in the mountains where Father Re is teaching young boys.

Casa Alpina is not only a boarding school. It also is a haven for Jews in hiding and looking to cross the border to Switzerland. The Pope has ordered his cardinals and priests to protect the Jews and Cardinal Schuster in Milan is helping protecting them. Soon enough father Re asks Pino to guide them, at night, without light to Switzerland. It was incredibly risky evading patrols and walking on dangerous pathways.

Pino helped many Jews to cross the border and it was done in impossible conditions. Just reading about what he did to save a pregnant Jews violinist, skiing the last kilometer with her on his back just helped by her Stradivarius that he held in front of him like a steering wheel was…. insane. Elating. Thrilling. I was out of breath and my heart beat so hard following their mad descent narrated by the exceptional Will Damron!

I loved it. I was transported in another time. In a time where ordinary boys became heroes and accomplished high feats.

When Pino goes back to Milan he will be urged by his parents to join the Nazis army in the OT. Pino will rage and then accept, being ashamed not to fight and rebel.

An unexpected turn of events will have Pino act as the driver and translator for General Leyers. High ranking General and Hitler’s acquaintances in charge of armaments and war production in Italy.

Pino’s uncle Albert will convince Pino to become a spy as he has access to high ranking Germans. His code name was “The Observer”.

When Pino goes to Dolly (General Leyers’s mistress) apartment the maid opening the door was none other than …Anna. The girl from the bakery.

Anna and Pino will love each other dearly. With intensity. Anna was “the one” for Pino. The one he wanted to marry once the war would be over.

As Leyers’s driver and interpreter Pino will meet Mussolini. He will also realize that Germans are using slaves to build what they needed. Pino will be horrified when he’ll realize how the Nazis treated these human beings. He will be devastated.

Pino will also save the General’s life thanks to his genius driving skills and quick thinking.

Each time the general praised Pino he felt conflicted. Proud of what he’s done as it requested maestria but ashamed that he liked to be praised by the enemy. By a monster.

The story really shows that nothing is clear cut.

As Leyers said “To you I am a monster. To my people I am a hero. Good or evil is always a question of perspective.”

All along Pino will risk his life passing information to the partisans and allies. Recovering a dead girl’s body lying to bring her back to her mother when he had to crawl under a white sheet, trapped between partisans and fascist’s fire. Praying that he would not be killed by a stray bullet.

What was excruciating was not being able to tell his family that he was not a traitor. That he did not work for the Nazis but helped the allies.

When the Americans free Italy, something horrible will happen that had me cry while walking on the street! Pino was lost.  Lost in his live, lost in his faith. That’s when Cardinal Schuster told him that

“Faith is like a falcon staying in the same nest for a long time. Then one day it left but it will always come back even years after”.

Throughout the book General Leyers will remain a mystery. He advised Pino  to “stay in the shadow, in the dark. So you lead but are never seen. Like a phantom of the opera.” Before, during and after the war things will always work for Hans Leyers. He traded in favors. He gave them. People would owe him. He would collect when the time came.

To this day I am still puzzled. On the one hand Leyers was a monster. He was behind the exploitation of slaves. Yet he was disgusted by what Hitler did to Jews. And what did he really know about Pino?

What had also me thinking was the “aftermath”. When the American freed Milan and people were out for revenge. It was a blood bath. If people thought you had collaborated with the Nazis you were killed on the spot. Il Duce’s body was desecrated by a blood thirsty mob.

It was horrifying. It was base instinct of  people who had suffered for years.

This story is incredible. To know what this young boy did is inspiring. The war was a time of unspeakable cruelty, of treason, of cowardice for many and a time of bravery and sacrifice for others.

I hope to never live these times that my parents, grand-parents and great grand-parents knew because I doubt that I will be as honorable and courageous as Pino Lella, Milanese of 18 years and war hero.

I’ve lived nearly eighteen incredible and gripping hours listening to Will Damron who told me the tale of Pino’s life with great talent.

Just read it. Or listen to it.

Did I convince you? Say yes please! Have you ever listened to an audiobook that made you WANT to do chores just to listen to it?