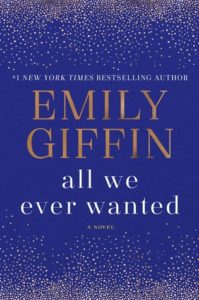 In the riveting new novel from the #1 New York Times bestselling author of First Comes Love and Something Borrowed, three very different people must choose between their family and their values.Nina Browning is living the good life after marrying into Nashville’s elite. More recently, her husband made a fortune selling his tech business, and their adored son has been accepted to Princeton. Yet sometimes the middle-class small-town girl in Nina wonders if she’s strayed from the person she once was.

Tom Volpe is a single dad working multiple jobs while struggling to raise his headstrong daughter, Lyla. His road has been lonely, long, and hard, but he finally starts to relax after Lyla earns a scholarship to Windsor Academy, Nashville’s most prestigious private school.

Amid so much wealth and privilege, Lyla doesn’t always fit in—and her overprotective father doesn’t help—but in most ways, she’s a typical teenage girl, happy and thriving.

Then, one photograph, snapped in a drunken moment at a party, changes everything. As the image spreads like wildfire, the Windsor community is instantly polarized, buzzing with controversy and assigning blame.

At the heart of the lies and scandal, Tom, Nina, and Lyla are forced together—all questioning their closest relationships, asking themselves who they really are, and searching for the courage to live a life of true meaning. (less)

This book had been recommended by a blogger friend and, as I wanted a contemporary read, I listened to the audiobook, narrated by three different narrators.

All did a very good job narrating that story!

This is a book about losing yourself along the way and trying to find your way back.

It’s about single parenting and how hard it is the make the right decisions for your kids, even if giving in would be so much easier.

It’s about being entitled and feeling you can lie and manipulate others to the point that nothing and no one can touch you.

It’s about lying and putting the blame on others, not taking your responsibilities.

This book is also about prejudices and social classes differences.

The story is also about a mother’s love or lack of, what it does to the kid.

It’s about hope, believing that someone deserves a second chance and can redeem himself.

That story is also about abuse, physical and mental and what he can do to you if you don’t speak about it.

This is not a happy story but this is a story that needed to be told. It’s an important tale.

As you can see, the topics featured are deep and many.

My beginning was slow and I didn’t fall into the story easily. Then I began feeling invested in Tom, Nina and Lyla’s story.

If I felt a kinship with Tom and Nina, Lyla seemed quite superficial and shallow at the beginning. Having always been a “reasonable” kid, I couldn’t understand her frivolity and why being seen as “cool” by the rich kids was so important.

But then, at some point, she really changed and she had a fantastic character’s growth! She matured and proved she was a generous and strong girl.

One thing is clear: I admired Nina.

Truly I did. Because when the time came, she took a very important and hard decision because she wanted to stay true to herself. She understood that if you have any hope to raise a great kid, you have to set the example, even if it breaks your heart. She also was a mom who will never stop loving her kid but who will also take hard measures because she is convinced that will save her kid, in the end.

This is a story addressing many important subjects related to today’s society. These are important topics, hard ones and the author did a great and nuanced job featuring them.

Have you read this?