Violet and Finn were “meant to be,” said everyone, always. They ended up together by the hands of fate aligning things just so. Three years into their marriage, they have a wonderful little boy, and as the three of them embark on their first vacation as a family, Violet can’t help thinking that she can’t believe her luck. Life is good.

So no one is more surprised than she when Finn leaves her at the beach—just packs up the hotel room and disappears. And takes their son with him. Violet is suddenly in her own worst nightmare, and faced with the knowledge that the man she’s shared her life with, she never really knew at all.

Caitlin and Finn have been best friends since way back when, but when Finn shows up on Caitlin’s doorstep with the son he’s wanted for kidnapping, demands that she hide them from the authorities, and threatens to reveal a secret that could destroy her own family if she doesn’t, Caitlin faces an impossible choice.

Told through alternating viewpoints of Violet, Finn and Caitlin, Almost Missed You is a powerful story of a mother’s love, a husband’s betrayal, connections that maybe should have been missed, secrets that perhaps shouldn’t have been kept, and spaces between what’s meant to be and what might have been. 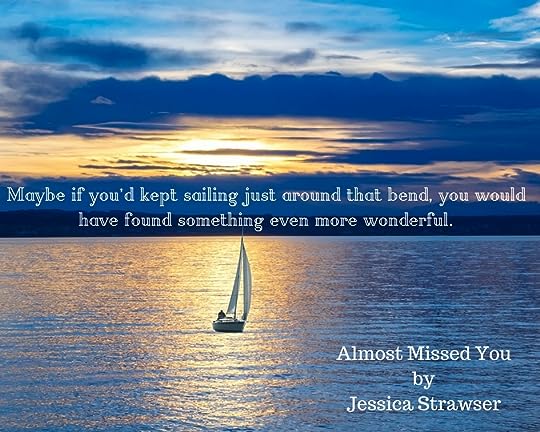 It’s been a tense and intense reading.

Intense because I deeply despised Finn until the last 3% of the book. By then I was able to feel some compassion. It’s a very unsettling feeling when all you can think about one of the main characters is what a coward he is. What a selfish human I thought. He had absolutely no right to do what he did to Violet! I could not think of a single reason good enough to justify it.

It was a tense reading as I wanted to rush through the book desperate to know what would happen next. Violet was an incredible mom and I could not fathom anything she could have done that would have make her deserve what she went through. It was so unfair. Unexplainable.
My head was constantly filled with the same questions going round and round: “Why? “ and “What if?”

Violet and Finn have been happily married for more than three years now. They met for a very short time six years ago on a beach. If their encounter was short it made a lasting impressions and Finn tried to find Violet. Several years later they reunited and have become the proud parents of a now three year old Bear.

They were on holiday when Finn and Bear suddenly disappeared leaving Violet devastated. Violet’s worst fear had come true. ” No-not her worst fears. That wasn’t right. The thing she had never had a reason to fear, something far worse. Her husband gone. Her child gone.”

Why? Why does a father choose to leave abruptly kidnapping his son without any warning whatsoever? Was Bear in danger because Violet was abusive?

Could you imagine just for one moment the anguish of not knowing where your child had been taken? If you would see him one day? Why your doting husband chose to flee? What could justify a mother so intense suffering it was bleeding through my Kindle? I’m a mother and this was deeply unnerving.

Violet was torturing herself looking for a reason why. ”The not knowing why he had done this or where he had gone was enough to make her feel as if she might be on the verge of something essential coming loose in her mind.”

And then you can’t help but think: WHAT IF?

The FBI was digging in Finn’s past. They were asking questions relentlessly. Surely Violet and Finn’s friend Caitlin must be naïve, stupid women. Or they had something to hide…
As the investigation progressed and I read about Finn and Caitlin’s past I was wondering: what if it was my husband?

All these secrets made me wonder if we really do know our loved ones. What if they were hiding their emotions and some dark past like Finn did for so long?

Could it happen to me?

We are always convinced missing persons, child kidnapping only happen to others. Until the day we’re proven wrong.

Has it all been a lie? Did Finn ever truly loved Violet? Were they meant to be?

This story is riveting and sometimes agonizing when I witnessed Violet’s utter despair. The switch between present drama and past secrets surrounding Finn and Caitlin kept me on my toe all along. The writing is real, precise, solid and fits the dramatic structure of the story. It got my attention right from the start and I did not want to stop reading even if I had to.

Terrifying in its possibilities.

Leave a Reply to The Paperback Princess Cancel reply