A charming fairy tale with a brooding prince. 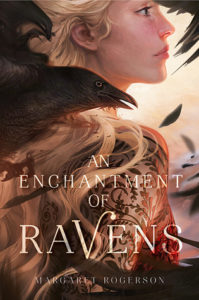 Isobel is a prodigy portrait artist with a dangerous set of clients: the sinister fair folk, immortal creatures who cannot bake bread, weave cloth, or put a pen to paper without crumbling to dust. They crave human Craft with a terrible thirst, and Isobel’s paintings are highly prized among them. But when she receives her first royal patron—Rook, the autumn prince—she makes a terrible mistake. She paints mortal sorrow in his eyes – a weakness that could cost him his life.

Furious and devastated, Rook spirits her away to the autumnlands to stand trial for her crime. Waylaid by the Wild Hunt’s ghostly hounds, the tainted influence of the Alder King, and hideous monsters risen from barrow mounds, Isobel and Rook depend on one another for survival. Their alliance blossoms into trust, then love, violating the fair folks’ ruthless Good Law. There’s only one way to save both their lives, Isobel must drink from the Green Well, whose water will transform her into a fair one—at the cost of her Craft, for immortality is as stagnant as it is timeless.

Isobel has a choice: she can sacrifice her art for a future, or arm herself with paint and canvas against the ancient power of the fairy courts. Because secretly, her Craft represents a threat the fair folk have never faced in all the millennia of their unchanging lives: for the first time, her portraits have the power to make them feel.

An Enchantment of ravens was one of these hyped books that I wanted to put my hands on.

In every fairy tale you need:


Herm no! Not him! Rook Prince of the Autumn court.


No, not Tiana either but Isobel!


Well Gadfly could be considered as a kind of twisted Godmother I suppose.

–A setting in a far away land or medieval country or … Whimsy living in a perpetual summer would do just good enough.

–An ordeal or some danger triggering a change or the beginning of a journey or a quest. Isobel being spirited away to Rook’s kingdom to stand trial is our trigger.

–A moral of the story like power and magic can’t overcome wit and determination;

–Often love because you have the “And they lived happily ever after”!

An Enchantment of Ravens fits the fairy tale description to a T. It is well written with a flowery quality to the penmanship as the story features fair folk. Faeries are very courteous, speaking formally and very insistent on good manners.
They will tear you into pieces but always politely!
Unable to lie they will trick you in other ways and you should be very careful asking something from the fair folk.

Isobel is a no nonsense kind of girl. She is barely seventeen but already a master of her Craft: painting. She is specialized in portrait and faeries are loyal clients. Faeries can’t bake bread or put a pen to paper for fear of dying. They are fascinated by human Craft and thirst for its possession.

The fait folk may live forever but a downside is that they don’t experience emotions. Feelings are seen like a weakness and the weak are crushed! That’s why when Isobel paints mortal sorrow in Rook’s eyes he becomes furious and whisks her away from home to mete justice!
This lack of emotions is also the reason why Isobel certainly does not wish for immortality contrary to most humans. Should she become immortal she would lose what makes her who she is: her Craft.
When most humans are fascinated with faeries and want immortality Isobel is weary of the fair folk.


“No. You surpass us all.” Beside me she looked colorless and frail. “You are like a living rose among wax flowers. We may last forever, but you bloom brighter and smell sweeter, and draw blood with your thorns.”

What began between Rook and Isobel in her parlor will blossom once in Fairyland and battling to stay alive. How will they survive this forbidden love punished by death?

I read this book in nearly one sitting.
It was a good fantasy read with relatable and loveable characters but I wanted more from Isobel. I would have loved more information about her parents, her dreams, her childhood. She battled constantly to stay level headed and this restraint put a damper on my feelings as well. It’s hard to love someone who erects walls around her heart and tries not to think with said organ but with her head.
Rook was more interesting! He was conflicted and puzzled by his human feelings. He was broody, courteous, handsome and sometime funny in his reactions and manhandled pride. I loved reading about his downfall as he became less fair folk and more human. Dare I say he seemed more human in his feelings than Isobel?

I know many readers don’t like love at first sight or in a short time span. Indeed tTo believe in their love story you have to go back to your childhood when the prince fell in love with the poor girl in a heartbeat. But hey this is a fairy tale!

The pace was right, the setting was interesting, the prince very charming if cocky and everything was lovely.

Would I recommend it? Yes absolutely if you are looking for a charming fairy tale.

Have you read it? Do you love fairy tales?