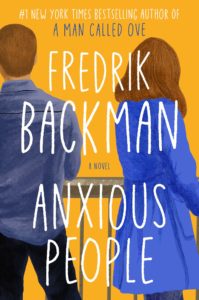 This is a poignant comedy about a crime that never took place, a would-be bank robber who disappears into thin air, and eight extremely anxious strangers who find they have more in common than they ever imagined.Viewing an apartment normally doesn’t turn into a life-or-death situation, but this particular open house becomes just that when a failed bank robber bursts in and takes everyone in the apartment hostage. As the pressure mounts, the eight strangers slowly begin opening up to one another and reveal long-hidden truths.

As police surround the premises and television channels broadcast the hostage situation live, the tension mounts and even deeper secrets are slowly revealed. Before long, the robber must decide which is the more terrifying prospect: going out to face the police, or staying in the apartment with this group of impossible people.

Thank you to @atriabooks and @bradeighgodfrey for my copy!

Anxious People by Fredrik Backman is an amazing read.

One I nearly DNF early on! 😱

I confess that the beginning seemed messy and I didn’t see where the author was going even if his writing already amazed me.

This book being part of a giveaway turned buddy read thanks to @thebookishladiesclub , I read others having the same issue but confessing that everything would make sense.

I resumed my reading and I can say that once more, Fredrik Backman blew me away!

I discovered his writing through Beartown that turned out to be my best read of  2018 and he proved once more that he is the wizard of the human soul!

The plot is built around a bank robbery turned bad and the bank robber taking in hostage severalpeople visiting an apartment.

We will follow all these people as well as the two police officers in charge of the situation.

From the first pages, you know that the bank robber escaped the appartment injured and we have no idea how he escaped!

Fredrik Backman has an incredible understanding of human nature. He built suspense, gave us a mystery to solve (how could the bank robber disappear) and several life stories to follow.

Seemingly disjointed in the beginning, in a non linear style and with lots of backstories, everything will come nicely together just to blow you away!

If Fredrik Backman sure knows how to build his story, what I admire most is his incredible penmanship.

I took notes all the time of so many quotes!

In just a few words, he makes you SEE evertything.

There is a depth, a wisdom in his analysis of life and human nature that is unmatched.

I think if he wrote a grocery list, I would still read it and find it insightful.

I just want to share two of my favorite quotes here from early on in the book to make you show you what I mean with being an amazing writer:

“It’s hardly surprising that people get confused and society is going to the dogs when it’s full of caffeine-free coffee, gluten-free bread, alcohol-free beer.”

“Jim was born in a generation that regarded computers as magic, Jack in one that has always taken them for granted. When Jim was young, children used to be punished by being sent to their rooms, but these days you have to force children to come out of them.”

Have you read his books? Did you love them?