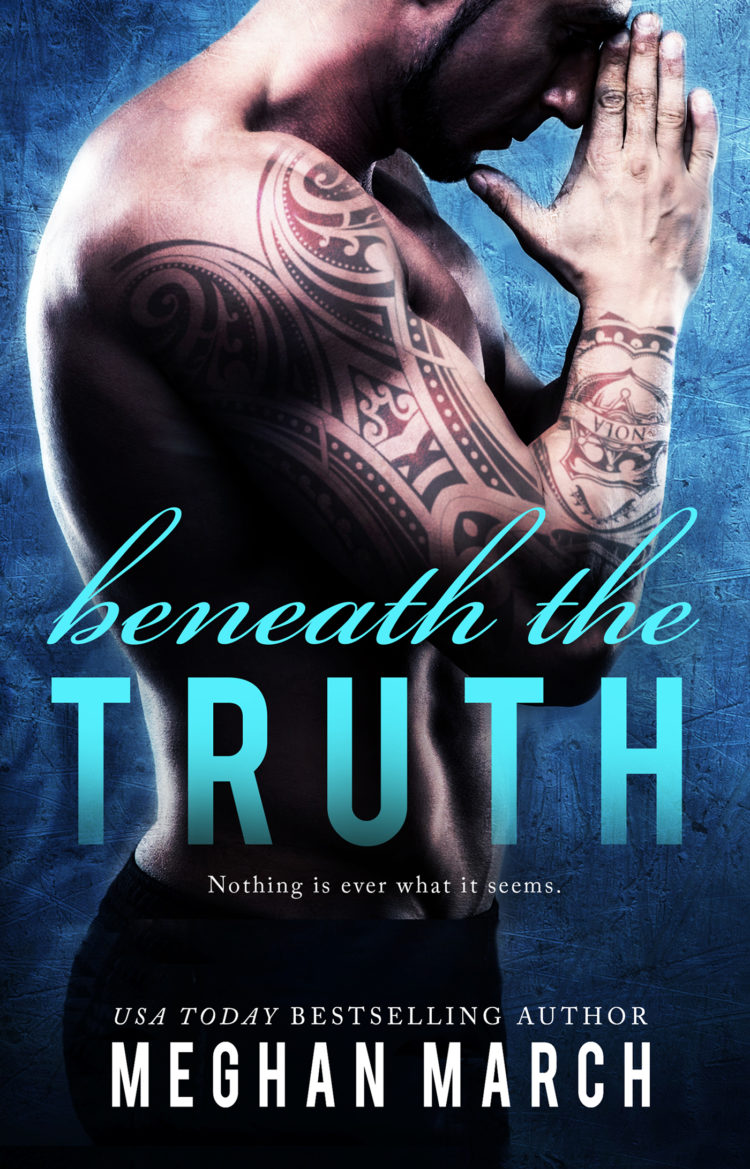 From USA Today bestselling author Meghan March comes the final sexy standalone set in the Beneath world of New Orleans.

I used to believe there were lines in life you don’t cross.
Don’t lie. Don’t cheat. Don’t steal.
Until I learned people don’t always practice what they preach.
I turned in my badge and gun and walked away from everything.
Then I got the call no one wants, and I’m back in New Orleans.
What I don’t expect is for her to be here too.
Another line you don’t cross?
Don’t touch your best friend’s little sister.
She’s always been off-limits.
Too bad I don’t follow the rules anymore.

“Fine. If you don’t want to play me, I’m sure there’s someone in this bar who will.”

She rose from the bar stool and smoothed her dress down her thighs. I swore it looked longer at the cemetery than it did right now, inching up her toned legs. The shoulders and chest were sheer black lace, as sophisticated as could be, but the lace took on a sexier edge in the dim light of the bar. I’d lay money on her being the classiest thing this place had ever seen. And damn, what those heels did for her . . .

I ripped my gaze away from her ass to focus on her face.

Her lips flattened in obstinate challenge before she strutted toward the pool table. And yeah, I used the word strutted because there was no other way to describe how she walked in those stilettos now that her attitude was flaring.

Oh, hell no. Not a chance, assholes.

I pushed off my seat and stalked toward her. Ari’s back was to me when I stopped behind her at the cue rack. She spun around, unaware of my presence, and smacked into my chest, a pool stick trapped between us. She sucked in a breath, jerking her head up.

“Sorry. Didn’t realize you were so close.”

Years ago, she never would have lost track of where I was if we were in the same room. The realization was a blow to my ego, although not unexpected. I no longer made the cut on her priority list, and that stung.

Rather than move and give her space, I reached around her to snag a cue off the rack, letting my arm brush her shoulder.

Ah . . . there it is. Her facial expression remained static, but her involuntary shiver gave her away. Maybe I’m not off the list completely.

I didn’t know why it mattered, but after the last few brutal days, I needed something good to distract me from the shit show that was my life. And there was no doubt in my mind that Ariel Sampson was everything good.

Her spine straightened and she bobbed around me, avoiding contact in favor of racking the balls and lining them up.

“Do you want to break?” she asked.

Ari rolled her eyes and reached for the chalk. With her stick prepped, she leaned over the edge of the table, her ass jutting out and the hem of her dress riding up her thigh.

Lord . . . I groaned silently. This was torture.

Haven’t I been through enough? I tossed the question skyward and received no sign the big man had heard me.

I tore my gaze off her ass and scanned the bar. Mistake. My fist tightened around the pool cue as a reflex, but that didn’t mean I wouldn’t use it to smack every jerk in this bar back into line if they didn’t quit staring. Double standard? Sure. But I didn’t care.

With a step behind her, I blocked the most direct view and turned to glare at all of them. Thankfully, Heath’s interest was hooked on the waitress working our table. One by one, the gazes dropped away, and I turned back to Ari, marginally satisfied that they picked up what I was throwing down. Off-limits, assholes.

Ari cursed and stood up straight, leaning lightly on her pool cue. “Dammit. I had that shot.”

I scanned the green felt and found half her balls were missing. “Jesus, what were you doing? Trying to clear the table?”

Her nose went up in the air. “Trying? If I wanted to clear the table, it would be clear. It’s just angles.”

Ari shrugged, but I caught a hint of a smile. “Didn’t you hear? It’s cool to be a geek now.”

I had no doubt that wherever she lived in California, she was exactly what was cool. Shit, she had every man’s attention in this bar.

“You were always cool in my book, Red. My turn.” Even though I wanted to wait for her smile, I chalked my cue and sank two shots before missing the third.

“Not bad.” Her nonchalant tone made me grin.

Her eyes finally locked on mine. “I succeed.”

Hell. Why was that statement so damned sexy coming from her lips?

She pushed off her pool cue and spun around to face the table again, her dress sliding up another inch as she bent over the table.

My dick pulsed against my jeans.

Heath is going to kill me.

Meghan March has been known to wear camo face paint and tromp around in woods wearing mud-covered boots, all while sporting a perfect manicure. She’s also impulsive, easily entertained, and absolutely unapologetic about the fact that she loves to read and write smut. Her past lives include slinging auto parts, selling lingerie, making custom jewelry, and practicing corporate law. Writing books about dirty talking alpha males and the strong, sassy women who bring them to their knees is by far the most fabulous job she’s ever had. She loves hearing from her readers at meghanmarchbooks@gmail.com.