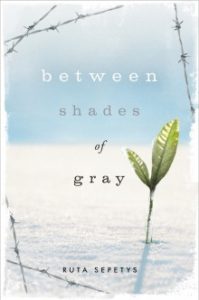 Lina is just like any other fifteen-year-old Lithuanian girl in 1941. She paints, she draws, she gets crushes on boys. Until one night when Soviet officers barge into her home, tearing her family from the comfortable life they’ve known. Separated from her father, forced onto a crowded and dirty train car, Lina, her mother, and her young brother slowly make their way north, crossing the Arctic Circle, to a work camp in the coldest reaches of Siberia. Here they are forced, under Stalin’s orders, to dig for beets and fight for their lives under the cruelest of conditions.Lina finds solace in her art, meticulously–and at great risk–documenting events by drawing, hoping these messages will make their way to her father’s prison camp to let him know they are still alive. It is a long and harrowing journey, spanning years and covering 6,500 miles, but it is through incredible strength, love, and hope that Lina ultimately survives. Between Shades of Gray is a novel that will steal your breath and capture your heart.

“Have you ever wondered what a human life is worth? That morning, my brother’s was worth a pocket watch.”

This was the last book by Ruta Sepetys that I still had to read and her first published work!

It didn’t feel like her other books. It was still extremely well written but I didn’t experience it as “unputdownable”.

I think because it didn’t develop the political and historical aspects as much as her other stories.

We still follow a few main characters, mainly Lina, her brother, mother and for a brief time Andrius but the story truly focuses on how they will survive the labor camps.

That part was equally enlightening and truly heartbreaking. To think other of what human beings are capable to do to others will always baffle me!

Luckily, amidst the darkness there also was some light like Lina and Andrius slowly unfurling love story.

“November 20. Andrius’s birthday. I had counted the days carefully. I wished him a happy birthday when I woke and thought about him while hauling logs during the day. At night, I sat by the light of the stove, reading Dombey and Son. Krasivaya. I still hadn’t found the word. Maybe I’d find it if I jumped ahead. I flipped through some of the pages. A marking caught my eye. I leafed backward. Something was written in pencil in the margin of 278.
Hello, Lina. You’ve gotten to page 278. That’s pretty good!
I gasped, then pretened I was engrossed in the book. I looked at Andrius’s handwritting. I ran my finger over this elongated letters in my name. Were there more? I knew I should read onward. I couldn’t wait. I turned though the pages carefully, scanning the margins.
Page 300:
Are you really on page 300 or are you skipping ahead now?
I had to stifle my laughter.
Page 322:
Dombey and Son is boring. Admit it.
Page 364:
I’m thinking of you.
Page 412:
Are you maybe thinking of me?
I closed my eyes.
Yes, I’m thinking of you. Happy birthday, Andrius.”

Not much happened in terms of plot but I sometimes wonder what they taught us in school!  I had no idea this happened to the Lithuanian people.

I know of course of what happened to the Jews at the hand of the Nazis, I knew of the Siberian work camps where people disagreeing with Staline were sent but not these massive deportation by Russians during WWII.

Nor that people didn’t dare talking about this ordeal decades after for fear of repercussion.

You have filth, you have death.

You have selfish people but you also have courage and lots of support from fellow people living the same tragic events.

No one was spared. Not the men but nor the women of children. Young and elderly were treated  with equal brutality.

Ruta is extremely gifted and that story was emotional, especially toward the end but the end was a little bit rushed and inconclusive if I may say so.

Now I don’t know what I’ll do waiting for Ruta’s next book!