He took me in when I had nowhere else to go.

He doesn’t use me, hurt me, or forget about me. He doesn’t treat me like I’m nothing, take me for granted, or make me feel unsafe.

He remembers me, laughs with me, and looks at me. He listens to me, protects me, and sees me. I can feel his eyes on me over the breakfast table, and my heart pumps so hard when I hear him pull in the driveway after work.

I have to stop this. It can’t happen.

My sister once told me there are no good men, and if you find one, he’s probably unavailable.

Only Pike Lawson isn’t the unavailable one.

I took her in, because I thought I was helping.

She’d cook a few meals and clean up a little. It was an easy arrangement.

As the days go by, though, it’s becoming anything but easy. I have to stop my mind from drifting to her and stop holding my breath every time I bump into her in the house. I can’t touch her, and I shouldn’t want to.

The more I find my path crossing hers, though, the more she’s becoming a part of me.

But we’re not free to give into this. She’s nineteen, and I’m thirty-eight.

And her boyfriend’s father.

Unfortunately, they both just moved into my house.

*BIRTHDAY GIRL is a stand-alone, contemporary romance suitable for ages 18+.

Penelope Douglas wrote: “Many were expecting my next book to be a Devil’s Night book or Fall Away spin-off story, but this idea popped in my head while I was writing Hideaway, and I simply couldn’t forget about it. It’s lighter than my usual fare, fun and sexy, and exactly what I needed to write right now.”

And she was spot on.  You won’t have twisted @holes or bullies here (aside Jordan’s ex) but you will have emotions, forbidden romance, loveable characters and a solid story. I read it in two days because I had to work or I would have finished it in one sitting.

I requested a copy of this book as soon as I learned it was available for bloggers! And I got lucky to get one because dang Penelope, you did good!

My rating: 4 “I have a girl crush on Jordan” stars. 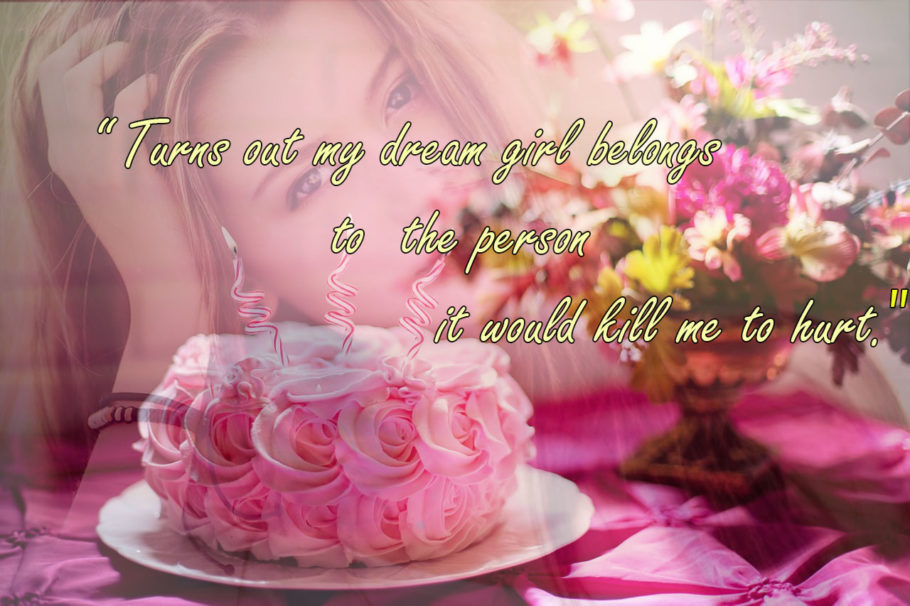 Jordan is impossible not to like. She comes from a trailer park, not abused by her family but neglected by the lack of attention. Every kid needs love and support when growing up but Jordan’s dad was too busy trying to survive with minimal efforts to really notice Jordan.

Her mom hightailed to more exciting adventures when Jordan was a little girl and it was up to her big sister Cam (I love Cam!) to raise her up. She could have turned bitter, angry and cheap. But no.

In spite of this far from ideal upbringing and despite a horrible ex-boyfriend Jordan is compassionate, smart and hard working. She is one of these solar personalities making everyone around her happy when she has even a small scrap of good.

Because Jordan is not demanding. She does not dream to become a star or to go far away from her small town. She just wants to have a job she likes, a small home, a loving husband and kids.

Jordan is also tired of being ignored and left behind.

She wants something and someone to hold onto, someone who would love her back.

Jordan is also someone loyal, someone you can count on. Her boyfriend Cole knows this too well and is taking advantage of it. When you need to pile up sandbags because it’s pouring and the river is overflowing she will work relentlessly in the rain and even will love it.

See why I have a crush?

Now let’s go back to the story because I digress…

The topic of the story is a little taboo but it’s not an impossible love either.

Girl and guy hit it on. The conversation flows effortlessly, the banter is easy and they love the same oldies.

Girl has a boyfriend so she feels a little ashamed to be so at ease.

Talk about feeling awkward and deception of something that could have been great if girl was single and if guy was not the father or said boyfriend and…..

To complicated everything and add some fuel to the fire, girl and boyfriend are forced to go live with the father. Because boyfriend made a big mistake and had them kicked out of their flat….

Now can you imagine the torture to live under the roof of someone you feel attracted too but know you can’t try anything with?

It’s like asking someone on a strict diet to work in a bakery smelling chocolate and vanilla all day!

Well that’s what Pike (the father) and Jordan experienced.

This story is full of:

-tension. Everywhere *naughty naughty Sophie!*. You can feel “it” coming like an unavoidable destiny, a freight train you can’t escape. But when will it happen?

-heat. You have chemistry and pheromones oozing from your Kindle. Just have a cooler close by or a fan or a cold shower;

–feelings. Contrary to what some could think this is far from sordid. It’s just a bad timing because from the first encounter it’s obvious Pike and Jordan are made for each other. Both are good people with moral compass. Both want to do what’s good for everyone and avoid hurting others. You won’t have cheating from Jordan or Pike. They just are not made like that. Yes they yearn. They long. They dream. But they will fight it too.

Because it would hurt others.

Because it would not be easy even without a boyfriend as they have the age gap.

–great relatable characters. I have already spoken aplenty of Jordan but Pike also is a real good guy. Even if I colored him dumb sometimes in his desire to do good with his son and deciding for Jordan what he thinks would be the best path for her future. Men can be clueless sometimes! Of course if he had been flawless the story would have been much less appealing and ended too soon.

Cam was an interesting side character. Stripping to raise her kid with the heart of a lioness to protect her young sister.

Well because I was mad at Jordan for being so blind (not commenting more as I don’t want to spoil your fun).  Why did she stay with Cole? He was a “moocher” and she worked her cute behind off to pay the bills while he partied with his pay! This is my only real “complaint” if you could call it that about that story.

If you are Penelope’s fan certainly and if you are not a fan already and were to frightened to begin with her series with bullies or twisted characters this is the perfect way to enter her universe!

So yes I recommend it!

Are a fan of Penelope Douglas books?