Day 13 of Blogmas 2019 is all about one of my favorite genres: Fantasy/PNR

I could have chosen The Wicked King or The Raven Boys or …. but I’d rather go with two books that totally surprised me in the best way and swept me off my feet!

Added bonus: they are not as hyped as the others I mentioned above! 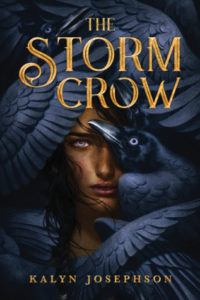 My first winner is The Storm Crow by Kalynn Josephson

This is the first book of a series, not published before seven months yet I want the sequel already!

You have all that makes epic fantasy and extraordinary read:

-Magic and magical crows;
-The clash of kingdoms;
-An evil and blood thirsty queen;
-A beaten yet strong heroine;
-A journey spiritual to regain her former self; intellectual as you have to solve the mystery to hatch crow’s eggs and physical as Thia will follow prince Ericen to Rodel;
-A rebellion brewing undercover;
-A handsome enemy prince and an alluring inventor former fighter;

And many other things sure to enthrall fantasy readers.

I am really impressed and grateful to Kaylinn Josephson as she had my rapt attention and she gave back my love of reading.

My second winner has already been mentioned as best YA of 2019 and will also get featured in a third and fourth category!!!!

Sorcery of Thorns by Margaret Rogerson

Oooh how I loved that story! It felt exhilarating!

I have so much to say and praise about that book that I might be bossy, sorry but not sorry, trying to MAKE you READ it!

I liked An Enchantment of Ravens but I adored Sorcery of Thorns!

Honestly this book is so many things!

First I bow low to Margaret’s imagination because I loved reading about a world where Great Libraries held grimoires who snored while sleeping, complained, laughed or had to have their spines massaged by apprentices when they got a special flu!

This was so original!

Not to forget gargoyle coming to life and stone angels awakened by sorcerers to join the battle and defend said libraries!

And I am not even mentioning the book lice being extra fat and hard to kill when they feasted on enchanted grimoires!

So the first thing to praise was the world building!

Imaginative, enchanting and so vivid!

Second I absolutely adored the balance between gravity and humor in this book!

Then of course or sorcerer Nathaniel Thorn is a master at irony and sarcasm.

Third I fell hard for the magical battles, the heroics, the constant action and exhilarating acts of bravery! I felt emboldened and energized.

What are is your favorite fantasy/PNR of 2019?