Today’s hero is an animal lover. Someone loving pets can’t be a bad person. Animals have a sixth sense to spot someone’s goodness. So if they flock like bees around a boy he must be a good person.

My choice today is about an incredible but difficult to grasp at first kind of hero. He rescues dogs.

If you want a very emotional but beautiful read you should read the book.

My winner today is Wyatt from Waiting for Wyatt by S.D. Hendrickson. 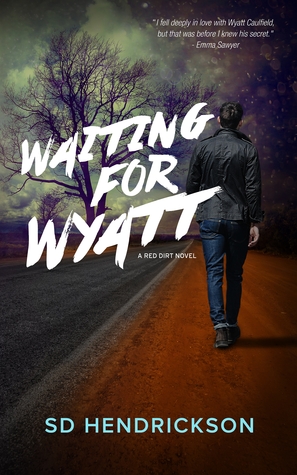 Yes I know another of her heroes. What can I say, I dig her characters LOL

Wyatt came across as intimidating, angry, withdrawn, certainly not someone you would try to speak to.

Wyatt works and lives at a kennel rescuing abused dogs. He is a man with a secret, distant with everyone but when he feeds the dogs and care for them, all his goodness shines. He shares a deep connection with every poor animal. He cares, protects them and devotes all his time to restore their trust in mankind.

“He had let me see inside his tormented soul, and it had broken every piece of my heart.”
― S.D. Hendrickson, Waiting for Wyatt: A Red Dirt Novel

My name is Emma Sawyer.
I met Charlie and Wyatt on the same sultry, summer day. It was unexpected, leaving a feeling in the pit of my stomach like the time I drove too fast over Beckett Hill. The moment happened out of nowhere, all fast and quick and a little strange. Or maybe that was just Wyatt’s personality.

It was Charlie that brought us together. Little Charlie with those ridiculous ears. I found the dog, waiting in a pool of his own blood. Waiting for someone. Waiting for me.

Now Wyatt, he wasn’t waiting for anyone. At least that’s what he said, except I saw something different in the broken guy all alone out in the woods. I knew he needed me before he knew it himself.

Wyatt with his hidden dimples. Wyatt with his warnings to stay away. He was a hard lump of coal, ready to burn everything around him. The more he burned, the more it pulled me into the pain I saw etched on his troubled face.

I wanted to help Wyatt. I wanted to save him like he had saved all the Charlies in the world. He told me not to fall for him, but I did anyway. I fell hard and fast and deeply in love with Wyatt Caulfield.

But that was before I knew his secret.

The Red Dirt Novel Series:
Get lost in stories from the Heartland. Each of these books are Standalone Novels that take place in the Red Dirt Country of Oklahoma. A few characters do cross between the stories, but they can be read in any order.
Waiting for Wyatt
My Lucky Days
Burning Confession (less)

Who is your favorite pet lover book boyfriend?