It could have been titled The Reluctant Alpha! 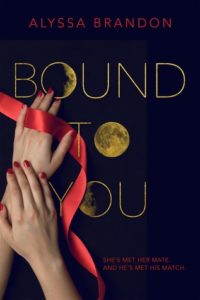 A stubborn teen faces off with her brooding, indifferent (but super hot) soulmate in this unique and sexy take on a classic paranormal romance story.

Megan Ross has been waiting her whole life for her mate to come and sweep her off her feet. But the wolf she meets on the beach is NOT the sweet gentle boy she’s been dreaming of. Instead, he’s a warrior, one whose suffering has led him to lock his heart away in a prison as cold and hard as a diamond, who fights to resist the bond and their deep attraction.

Far from home, with a soulmate who is still a stranger, Megan learns that the path to true love isn’t quite as straight and easy as she thought . . .

Chosen by readers like you for Macmillan’s young adult imprint Swoon Reads, Alyssa Brandon’s debut novel Bound to You is guaranteed to make readers swoon, sigh, and maybe even cry before it’s over.

Bound to You was an enjoyable and easy to read story. It holds many potential but it was also frustrating sometimes.

Let’s begin with the positive

The concept was refreshing.
No insta love when you find your mate. There is the bond you can feel it but it could have been titled The Reluctant Alpha! James did everything he could to avoid the bond. He avoided Megan like the plague.
On the other hand being the big bad alpha he wanted his mate in his territory!
It was all “chase me, chase me not”.

Far from the usual werewolf trope. And I truly loved this! It was a nice change from the insta love you can find in other shifter books. I love them but was really delighted to find something a little bit harder in this novel.

The universe was original
The concept of warrior wolves with special abilities and purpose (not saying more) was interesting.

The side characters with distinct personalities helped to flesh out the story and gave a small community feel.

Now what I missed to give it 4 stars or more

My biggest issue was with Megan. She was quite immature.

Of course she is only 18 but she was quite gullible with pink ideas about love and mating bond. I know this also was the purpose of the story: opposing jaded and reluctant James to loving and bubbly Megan but it did not work for me. I wanted more depth and nuances in Megan. That said I know she will win other readers hearts as she is sweet and wants so much to be loved, to come first in someone else’s priorities.

Dig deeper.
James had a traumatic past. What could have been a reason to amp up the angst, to add to the folklore explaining some magic has been barely brushed. We remain on the surface instead of diving in.

This story is also the epitome of how unecessary drama could be avoided with a good talk. But of course you have to be willing to talk what closed off James was not. Megan faced an impossible task!

Now all that frustrated me could very well overjoy you! I have friends blossoming with stories filled with misunderstanding and heroine having to grow up. It’s just not my prefered reads. As my issues might not be yours give a chance to this story if you think this could be your cup of tea.

Last parting words: I thank the publisher for his trust giving me this book. It takes courage and a great amount of work to write and publish a story, never forget this.