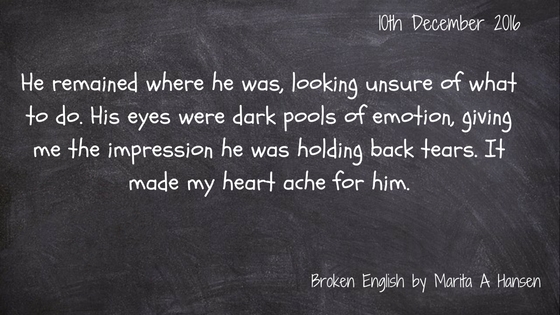 I finished this book yesterday evening. Or was it rather this morning as I read late into the night? Anyway my head was swimming it was a jumble of conflicting emotions.

I could not stop reading the book so it had to be good, right? But my problem is I still think what happened was wrong!

So I’ll play the Devil’s advocate and argue with myself. Imagine a small angel on my right shoulder and a small devil on my left shoulder each whispering in my ears.

”He turned around and sat up, his angry gaze going to mine. I froze, taken aback by his appearance. He was… Beautiful.”

He wants you so bad.

You have to help and protect him. Poor kid he has such huge issues and his arrogance and cockiness serve only to hide what’s behind the façade.

”He had such a conflicting personality, a variety of moods that popped up at any given time, changing from one to the other without warning. “

Now, do you understand why I’m conflicted, torn, lost…about that story?

This is not a “simple” teacher fall in love with student story. The student is only fifteen and he is the pursuer not the teacher. It gives the whole story an interesting and challenging edge.

I did not love Dante in the beginning. Like everyone else I saw him as an arrogant prick with a huge sexual drive. He did things for a living I can’t condone even if I know it’s a matter of survival. His recklessness for all that’s sexual made him hard to take seriously.  He is constantly provoking teachers, adults other kids even. He reeks of sensuality.

But he grew on me as I learnt what happened to him and what his upbringing was and still is. For such kids coming from very poor and difficult neighborhood the future is not bright. They fight to survive be it selling drugs, stealing parts or selling their body.

Now I want him to have a happy end but not with his teacher now because he is still jailbait.

Clara was a fantastic teacher and person even with her thoughts about Dante. She is flawed and human. She gave so much to help these kids. She was passionate about her job. Still she shouldn’t have done what she did.

He should have…she shouldn’t have…these are mighty principles but once life is knocking at your door it’s not always easy to remain on the right path.

I may think I would have acted in another fashion I’ve never walked in their shoes thanks God! What would I have done? Would I have been strong enough?

So to make it short: it’s been a very good read that pushed me way out of my comfort zone. I’m left disagreeing with the character’s choices but still waiting impatiently for book two because I have to know what will happen!