Today’s choice is one of my favorite authors and the cover is yet to be decided but Suanne Laqueur used a mock up …for now!

A Scarcity of Condors is said to be published late in December 2019 and I don’t expect it much sooner as Suanne is currently editing another book that I am waiting with great impatience: the last of Leylah Attar! 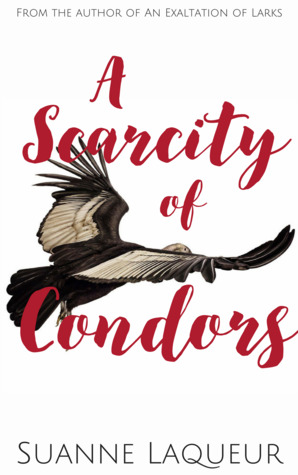 Juleón “Jude” Tholet has survival in his DNA. His father lived through imprisonment and torture during Pinochet’s military coup in Chile. His mother risked everything to gain her husband’s freedom and flee the country with their newborn child. But as a closeted gay teenager growing up in Vancouver, Jude is targeted by a neighborhood bully called El Cóndor, culminating in a vicious hate crime that forces the Tholets to flee again, this time to Seattle.

Jude cautiously rebuilds his life, but his voice is silenced, his wings have been clipped and he cannot seem to soar either in his career or his relationships. Only family remains a constant source of strength and joy, until a DNA test reveals something that shocks all the Tholets: Jude is not their child.

Stunned by the test results, the Tholets must dig into their painful past, re-examine their lives in 1973 Santiago and the events surrounding Jude’s birth story. It’s a tale rooted in South America’s Operation Condor. It spreads through Pinochet’s military coup in Chile and his terrifying regime of detention camps, torture, disappeared civilians and stolen children. It ends with Jude digging through his genetic code in a quest to find his biological parents. Are they alive? Or are they among Los Desaparecidos—The Disappeared Ones?

And you what’s the book that you can’t wait to read this Wednesday?