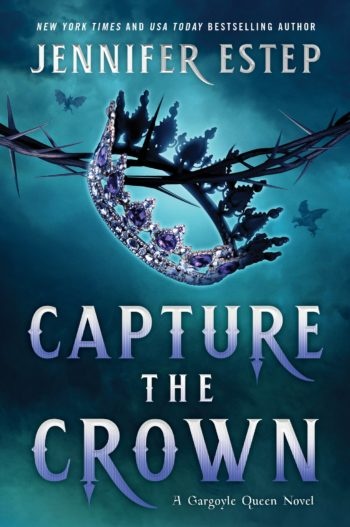 Bestselling author Jennifer Estep returns to her Crown of Shards world with an all-new trilogy and a bold new heroine who protects her kingdom from magic, murder, and mayhem by moonlighting as a spy. Gemma Ripley has a reputation for being a pampered princess who is more interested in pretty gowns, sparkling jewelry, and other frivolous things than learning how to rule the kingdom of Andvari. But her carefully crafted persona is just an act to hide the fact that Gemma is a powerful mind magier—and a spy.

Gemma is undercover, trying to figure out who is stealing large amounts of tearstone from one of the Ripley royal mines when she encounters Prince Leonidas Morricone of Morta—her mortal enemy. Gemma tries to steer clear of the handsome prince, but when she finds herself behind enemy lines, she reluctantly joins forces with Leo. Also coming to Gemma’s aid is Grimley, her beloved gargoyle.

Despite the fact that Andvari and Morta are old, bitter enemies, a dangerous attraction sparks between Gemma and Leo. Further complicating matters is Leo’s murderous family, especially Queen Maeven Morricone, the mastermind behind the infamous Seven Spire massacre.

The closer Gemma gets to the stolen tearstone, the more deadly plots she uncovers. Everyone is trying to capture the crown, but only one queen can sit on the throne…

First I’d like to thank Jennifer Estep for my copy as I won it in a giveaway!

This has no influence on my review. I just already was a big fan of Kill the Queen series and Capture the Crown didn’t disappoint.

If you have read Kill the Queen, you might recall little Gemma escaping from the massacre that killed Evie’s family. Gemma will never forget these horrible moments. This story centers around her, many years after.

She may have been a little girl but she feels guilty for the death of her uncle Frederik and so many others as she had heard Maven’s thoughts and knew something bad was coming. Yet she kept quiet and when it happened, she was so overwhelmed by everyone’s thoughts as a mind magier that she just hid under the table.

Since that day, she is carrying huge guilt and PTSD. Gemma thinks she is a coward and wants to make up for her inaction that dreadful day.

Of course, we’ll all think that she was a kid and it wasn’t her fault but Gemma has other ideas.

That’s why Gemma has chosen to be a spy!

She has cultivated her image or pampered and useless princess, the perfect cover, while she goes on spying missions, deeming it the only way to protect her kingdom.

At the beginning of the story, Gemma Is working undercover as a minor. Tearstones have disappeared from the mines and she fears nefarious designs behind these thefts.

That will bring her on the path of very dangerous individuals, to the brink of death and right into a nest of vipers at the dangerous court of Morta!

Danger and action lurk at every corner of that story.

But you also have one of my favorite tropes here: enemies to lovers!

Gemma will indeed ally with the handsome prince of Morta, prince Leonidas, another mind magier who betrayed her when she was a kid. But as both want to uncover the plot, they will temporarily join forces. Now, won’t Leonidas betray her again?

It was fast paced, very enjoyable to read but know that there were some hard moments with torture scenes. So be aware that Jennifer didn’t hold anything back here!

I also loved that Leonidas was a character in all shades of grey. He was handsome, powerful, kind but also very loyal to his mother Maven who is ultimately Gemma’s enemy! When your loyalties are torn, it makes for a very interesting and tense plot as you don’t know which way the scale will tip!

I can’t wait for the sequel!