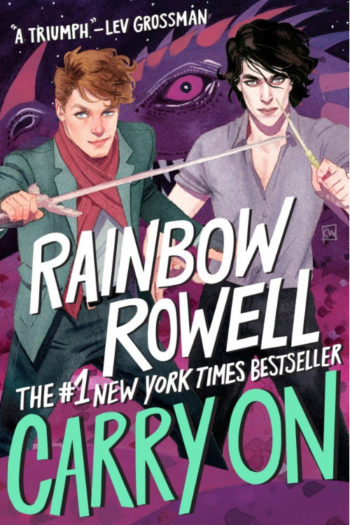 Simon Snow is the worst Chosen One who’s ever been chosen.That’s what his roommate, Baz, says. And Baz might be evil and a vampire and a complete git, but he’s probably right.

Half the time, Simon can’t even make his wand work, and the other half, he starts something on fire. His mentor’s avoiding him, his girlfriend broke up with him, and there’s a magic-eating monster running around, wearing Simon’s face. Baz would be having a field day with all this, if he were here — it’s their last year at the Watford School of Magicks, and Simon’s infuriating nemesis didn’t even bother to show up.

Carry On – The Rise and Fall of Simon Snow is a ghost story, a love story and a mystery. It has just as much kissing and talking as you’d expect from a Rainbow Rowell story – but far, far more monsters.

This was a whimsical read with a very “British” feel to it. The British-ness came from the characters and dialogs, extremely well interpreted by the narrator Euan Morton.

You have of course Simon Snow.

Born from “normal” parents but gifted with more magic than any mage and dubbed the “chosen one”.

He was a sorry thing when he came back to Watford School of magic every year after spending his summer in the foster care system. I truly felt sorry for Simon.

Underfed, tall gangly, but bursting with energy. All along he’ll run towards danger head first. Clueless so many times and fumbling. He wanted to defeat the Humdrum at all cost but had no finesse on how to harness his magic. Simon went off in big blasts of magic and very few control over it. He felt like a big enthusiastic puppy to me and was very lovable and relatable.

“Just when you think you’re having a scene without Simon, he drops in to remind you that everyone else is a supporting character in his catastrophe.”

He was with “Agatha” also named “beloved one”. But that felt more like habbit, a well worn and comfy jumper than real love to me.

Simon is rooming with Baz.

Baz or Bastien Pitch is heir to a long dynasty of mages.

Son of Watford’s former headmistress he is all that Simon isn’t.

Controlled, elegant, cool, smooth and…probably a vampire. Baz will sneer at Simon’s lack of control and gruff exterior. You’ll never catch Baz with a hair out of place. Perfectly groomed he is well bred and irremediably gay. This was a sore spot for his noble family. And it was a secret.

Simon and Baz are at each other’s throat since the first year Simon showed up at Watford. Simon is convinced Baz is plotting against the Mage (see below) and Baz is…playing the mole for his family.

This will be a prime example of enemies to lovers story!

Then you have Penelope.

Simon’s best friend and daughter of a formidable mage of a mother.

Penelope will always have Simon’s back and she is a BRAIN! Whizz kid with magic too she is totally immersed in the mage world and dedicated in helping Simon to vanquish the Humdrum. She is the best friend everyone wants and need!

“She told me later that her parents had told her to steer clear of me at school.
“My mum said that nobody really knew where you came from. And that you might be dangerous.” “Why didn’t you listen to her?” I asked.
“Because nobody knew where you came from, Simon! And you might be dangerous!”
“You have the worst survival instincts.”
“Also, I felt sorry for you,” she said. “You were holding your wand backwards.”

She also does wonder talking through animals when emergency arises.

After Penelope you have Agatha.

Pale, blond, ethereal Agatha. Enamored with the normal world and repulsed by magic. Agatha acted like these tragic heroines, resigned to her lot when threatened of death. Honestly, she felt like the slightest breeze could sweep her away.

Last but not least, you have The Mage.

He is Watford’s headmaster and head of the coven.

He has enemies in the old families as he wanted to open Watford to less powerful mages. He also made Simon his ward and is protecting him.

The mage is.. harried. You see that his attention is divided between politics with the old families revolting and beating the Humdrum all while hoping that Simon will finally master his enormous power.

I had no idea what that book was about nor about the tone of the story.

Honestly it was very entertaining to see all these characters try to fight the humdrum, solve the mystery of Baz’s mom’s death and disentangle their feelings. From sworn enemies to more, that gay love story was perfectly executed and felt organic. Nothing was forced, it just happened.

“What you are is a fucking tragedy, Simon Snow. You literally couldn’t be a bigger mess.”
He tries to kiss me, but I pull back- “And you like that?”
“I love it.” He says
“Why?”
“Because we match.”

Also the magic system and the incantation sounding like child rhymes and song was so charming.

The audiobook is so British (the narrator does a splendid job being self-deprecating, sarcastic and clueless). I totally recommend it!