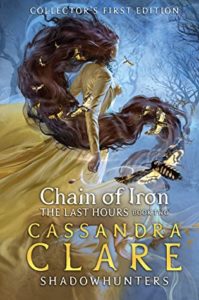 The Shadowhunters must catch a killer in Edwardian London in this dangerous and romantic sequel to the #1 New York Times bestselling novel Chain of Gold, from New York Times and USA TODAY bestselling author Cassandra Clare. Chain of Iron is a Shadowhunters novel.Cordelia Carstairs seems to have everything she ever wanted. She’s engaged to marry James Herondale, the boy she has loved since childhood. She has a new life in London with her best friend Lucie Herondale and James’s charming companions, the Merry Thieves. She is about to be reunited with her beloved father. And she bears the sword Cortana, a legendary hero’s blade.

But the truth is far grimmer. James and Cordelia’s marriage is a lie, arranged to save Cordelia’s reputation. James is in love with the mysterious Grace Blackthorn whose brother, Jesse, died years ago in a terrible accident. Cortana burns Cordelia’s hand when she touches it, while her father has grown bitter and angry. And a serial murderer is targeting the Shadowhunters of London, killing under cover of darkness, then vanishing without a trace.

Together with the Merry Thieves, Cordelia, James, and Lucie must follow the trail of the knife-wielding killer through the city’s most dangerous streets. All the while, each is keeping a shocking secret: Lucie, that she plans to raise Jesse from the dead; Cordelia, that she has sworn a dangerous oath of loyalty to a mysterious power; and James, that he is being drawn further each night into the dark web of his grandfather, the arch-demon Belial. And that he himself may be the killer they seek.

How am I supposed to wait one year now???

That should be the tagline of that book!

Honestly, Cassandra Clare really outdid herself with the unexpected developments in this story!

Everyone will be fooled at some point and my heart ached for my favorite characters when I discovered the trickery alongside them!

Cordelia, Lucie and the Merry Thieves, James included, are all worthy heroes and seeing them manipulated at one point or another and then living with the guilt was heartbreaking.

Cordelia is still my favorite heroines from Cassandra Clare alongside Tessa.

She is selfless and has always dreamt of being a hero, a savior.

In Chain of Iron, she marries James, her love, knowing that he is in love with another. But she is courageous and faces it. Even excusing James to Matthew when he broke his promise to her. She puts his feelings first and is quietly brave.

She also is thoughtful and very insightful, often noticing things about people she loves when the try so hard to hide them or ignore them.

But Cordelia is also troubled in Chain of Iron as Cortana seems to reject her. And by the end of the story, she’ll be even worse after what happened to her.

I honestly was horrified to know of her fate because it was taking her hopes and dreams and making a mockery of them! Now she has to bear the guilt.

James proves to be a worthy hero.

He is the glue to the Merry Thieves band and he so didn’t deserve what Grace did to him so long ago. You can feel his love for Cordelia even if it’s muted by the enchantment.

I was on pins and needles and thought: “Come on, come on! Break that enchantment! It’s Cordelia you are in love with! REMEMBER!” I might have bitten all my nails in the process…

And I wanted to strangle Grace!

Even if Cassandra Clare gave us insight into her childhood that should make me empathize and find excuses I confess that I couldn’t forgive her anyway.

Matthew is a tragic hero and made me want to hug him.

We’ll finally learn why he is sad all the time, what burden he bears. But he is falling into alcohol more and more and that hit close to home for me. Knowing his feeling for someone and the impossibility made me even more sad for him. I confess that I have no idea how Cassandra Clare will manage to reconcile everyone’s feelings by the end of the series!

And if Cordelia still plays an important part in the story, the focus is primarily on Lucie.

I regretted that she hid things to her friend and future Parabatai Cordelia. I wanted more Lucie and Cordelia time. Even if this ramped up tension and suspense in the story as everyone had secrets to hide and I wondered what would happen when the cat would be out of the bag.

Lucie’s powers are astonishing and frightening at the same time. Her love story with Jess is no less worthy of James and Cordelia’s.

The writing was superb and the banter on point when it happened. I missed having more of it as we had in the first book as I think humor is an important part of my reading enjoyment.

My interest for this series is ever growing if that was possible and I wonder how I will wait for the next book!

Because of course we are left on a cliffhanger when just minutes before the end you thought some things could have a happy ending. Alas, we must wait!