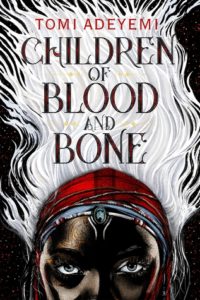 They killed my mother.
They took our magic.
They tried to bury us.Now we rise.

But everything changed the night magic disappeared. Under the orders of a ruthless king, maji were killed, leaving Zélie without a mother and her people without hope.

Now Zélie has one chance to bring back magic and strike against the monarchy. With the help of a rogue princess, Zélie must outwit and outrun the crown prince, who is hell-bent on eradicating magic for good.

Danger lurks in Orïsha, where snow leoponaires prowl and vengeful spirits wait in the waters. Yet the greatest danger may be Zélie herself as she struggles to control her powers and her growing feelings for an enemy.

Have you ever been afraid to read a book that’s been really hyped? Yes? Because that’s how I felt with Children of Blood and Bones.
For months I’ve seen readers and bloggers rave about the book. Yet I did not feel drawn to it especially as the cover did nothing for me …at that time.

What pushed me to finally read it was attending YALC London for the first time. Tomi Adeyemi was one of the signing authors. I had to buy some books (yes had to! As a true bookworm you must understand what I’m speaking about) and this one made it on my list.

I began reading Children of Blood and Bones the day before meeting Tomi.
It was ambitious to think I would have finished it as the book is big with 525 pages and I was traveling with my daughter so conversation was expected (even if she too was engrossed in her books).

There is a saying telling “A Picture is worth a thousand words” so this went like:
Me *opening the first page and reading a few sentences*

Me * today after having read till the wee hours to finish* 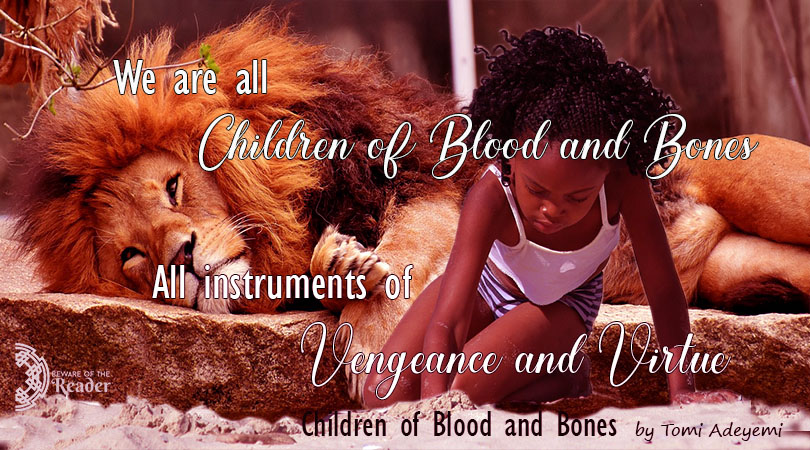 Tomi Adeyemi wrote an epic and desperate story happening in an imaginary world filled with fantastic beasts and people with hair white as snow and silver eyes.

The crux of the story is the oppression of a whole people because they are different *bearer of magic* and frightens others with their powers. Or at least they frightened the king and he’s made his mission to destroy magic and their bearers.
The result was a massacre of thousands of adults maji, all marked by their white hair, leaving their kids and families broken. To ensure the complete destruction of this “race” taxes were due if you gave shelter to a diviner *maji without powers* and the taxes were so high diviners ended in the “stock” meaning slaves.

Zelie is a diviner whose mom has been killed by the king ten years ago, when magic deserted the majis and allowed their massacre. Zelie is a diviner and for all her bravado and brawl she is frightened all the time. Because as a diviner she can end in the stock. She is no better than cattle.

Of course as in every oppressed people you have a rebellion.

That’s what Mama Agba did all these years training diviners to fend for themselves and protect others with staffs.

“Pick Me. It’s all I can do not to scream. I dig my nails into the marula oak of my staff and squeeze to keep from fidgeting. Beads of sweat drip down mu back, but I can’t tell if it’s from dawn’s early heat or from my heart slamming against my chest. Moon after moon I’ve been passed over.
Today can’t be the same.”

These were the first opening lines of the book and they sucked me in.

From that point I’ve read feverishly the adventure of Zelie, her brother Tzain, Amari the king’s daughter and Inan the prince.

Told with three voices, the only voice missing is that of Tzain I followed Zelie in her quest to restore magic.
You have unexpected encounters, new allies, betrayals, twists and turns all along.

What I really did like was that even if Zelie had been chosen by the gods she was far from perfect. She was hotheaded, impulsive yet strong, loyal and courageous. She reminded me of Starr in The Hate U Give. Both female characters have been pushed at the front of a story bigger than they are. Both have doubts and don’t believe they are the right person to carry a whole people’s voice or destiny. Yet both fight when it’s time to fight because being courageous is not being fearless it’s acting even if you are frightened.
Zelie was above all else human at her core. She felt, doubted and suffered and that’s what made her a very relatable character in spite of her divine mission and badassery *is this a real word?* with a staff and later with magic.

So why not 5 stars?
Well I am a true romantic and there is one romance in this book that ended disappointing me. I won’t spoil your fun but let’s say that I had big hopes and when it ended it was barely like Tomi brushed it under the rug and all was forgotten.

Should you read this book?
Yes if you are looking for:
-epic story filled with action and magic;
-flawed heroes doubting their strength yet jumping head first in an adventurous quest and facing huge dangers;
-plot twists because in every quest you have ordeals and setbacks just to make the hero be even more determined;
-politics in YA because yes it reminded me of all oppressed people or races we have witnessed in the past and in recent years.