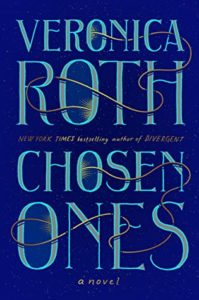 The first novel written for an adult audience by the mega-selling author of the Divergent franchise: five twenty-something heroes famous for saving the world when they were teenagers must face even greater demons–and reconsider what it means to be a hero . . . by destiny or by choice.A decade ago near Chicago, five teenagers defeated the otherworldly enemy known as the Dark One, whose reign of terror brought widespread destruction and death. The seemingly un-extraordinary teens—Sloane, Matt, Ines, Albie, and Esther—had been brought together by a clandestine government agency because one of them was fated to be the “Chosen One,” prophesized to save the world. With the goal achieved, humankind celebrated the victors and began to mourn their lost loved ones.

Ten years later, though the champions remain celebrities, the world has moved forward and a whole, younger generation doesn’t seem to recall the days of endless fear. But Sloane remembers. It’s impossible for her to forget when the paparazzi haunt her every step just as the Dark One still haunts her dreams. Unlike everyone else, she hasn’t moved on; she’s adrift—no direction, no goals, no purpose. On the eve of the Ten Year Celebration of Peace, a new trauma hits the Chosen: the death of one of their own. And when they gather for the funeral at the enshrined site of their triumph, they discover to their horror that the Dark One’s reign never really ended.

Chosen Ones  is Veronica Roth’s first book in her new “adults” series.

The plot in a nutshell: four teenagers were chosen years ago, following a prophecy, to fight The Dark One. He was a being destroying everything and everyone on the planet.

These teenagers, Sloane, Ines, Esther, Matthew and Albi, defeated the enemy. We are now ten years later and they all try to move on with their lives the best they can, some battling serious PTSD.

When one of them dies, they discover that the Dark One’s reign never ended. They will have to fight, again, and face new ordeals and horrors.

I struggled with the beginning of the story.

We get “dumped” into a new world, Earth post dark One. The elements to understand the past events, how the characters happened to be chosen and how they mastered magic are interwoven into the story. It took a while for the plot to find its direction.

As a result, I needed some time to get my footing into the story.

Once we get into the heart of the matter, once Sloane, our main character, is forced to raise to the occasion… she shed all pretense and I was ALL IN!

In addition to the “slow to be revealed plot”, the book was not easy to read as the main character, Sloane, is surrounded by barbed wires.

She, alongside the other chosen ones, has been through a lot and is obviously suffering from PTSD. Sloane also feels a lot of guilt and hides some secrets weighting on her soul. For a very long time, she has to pretend, to show a brave “I don’t give a fig” face in this new world for the “after the death of the Dark One”.

Never smiling, avoiding the press as much as she can, plagued with nightmares remnants of her encounter with the Dark One, she does not know how to live a “normal life” in this “after”.

“Nobody ever prepared me for what came after. They just assumed I would never find out.”

Sloane, like every Chosen One, hadn’t great role models for parents either. No war family to rely on and help her transition after the ordeal. But maybe her childhood was one of the worsts among her friends.

« Sloane had gone her entire life never getting what she wanted. No one had ever asked her what she wanted. She didn’t make any Christmas list or birthday requests, that was a given – but there were also no signed field-trip forms, no clubs or sports or musical instruments, no lunch money -hell, no food in the kitchen half the time.”

She had to fend for herself all her life and so many people disappointed her that she became resourceful and defiant. Certainly not trusting easily and trying to find everyone’s ulterior motives.

As you can see through these quotes, Veronica Roth took the time to flesh out her characters, to give them a true substance. No Sloane was not your happy/bubbly heroine. No, she was not pretending to care what others thought about her. Yes, she had foul moods and panic attacks.

But slowly yet surely, Veronica Roth made us walk into Sloane’s shoes, enter her psyche. Step by step, we learned more about what she had done and haunted her.

Of course, Sloane was not the only character in that book.

I loved Esther and her obsession with social media, most precisely Instagram. Albie… I have a soft spot for Albie * sigh*. Ines was the one we won’t really follow in this first instalment and then, there is Matthew!

Matt was …too perfect and annoyed me. Like the perfect poster boy that teachers and parents love. Always taking the time with everyone, cheering everyone up, kind but also …bossy. Or rather expecting everybody to fall in line and do what he wanted.

“We’re supposed to be a team Sloane.”

“You don’t want a team,” Sloane said. “You want obedience.”

But, yes maybe I am biased. He too, went through Hell and back. Yet I resent him for not truly seeing Sloane and somehow, forcing her to wear a mask for such a long time.

« And maybe that was the entire problem with them – he didn’t see her; he saw who she could be with a few adjustments, and all she wanted was to stay busted and be left alone.”

As I said in the beginning, the action really kicked in late but I loved the new storyline!

I loved the “new inhibited” Sloane. She really came to life! She had a purpose again, a usefulness.

I discovered someone smart, nerdy, courageous, bold and a smartass.

The new character we’ll meet was also very, very compelling. Flawed. Broken but not destroyed. And so appealing with his faults!

Véronica Roth took the time to set her story but she amazed me with her theories, her dystopian universe. For as much as I struggled to love Sloane, I am very pleased that she was a flawed and rough character. Because once she was in her element, we got to see the true Sloane, no mask, no pretense and I love that kick@ss girl!

Cherry on top, I love the “chosen ones” trope and this had a very unexpected and nice twist to it!  You can also expect action, magic, unstable characters, destruction and of course, a villain!

Many thanks to the publisher Hodder & Stoughton for sending me this finished copy! It had no influence whatsoever on my willing and always honest review.

Have you read Veronica’s books? Do you plan to read this oen? What do you think of the Chosen One trope?