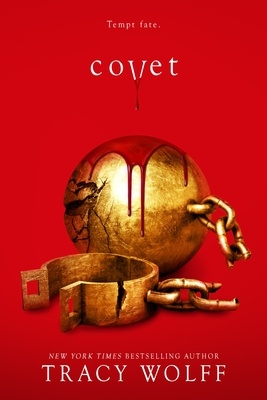 I may have reached my breaking point. As if trying to graduate from a school for supernaturals isn’t stressful enough, my relationship status has gone from complicated to a straight-up dumpster fire.Oh, and the Bloodletter has decided to drop a bomb of epic proportions on us all…

Then again, when has anything at Katmere Academy not been intense?

And the hits just keep coming. Jaxon’s turned colder than an Alaskan winter. The Circle is splintered over my upcoming coronation. As if things couldn’t get worse, now there’s an arrest warrant for Hudson’s and my supposed crimes—which apparently means a lifetime prison sentence with a deadly unbreakable curse.

Choices will have to be made…and I fear not everyone will survive.

How didn’t I know about Tracy Wolff’s books sooner??? That seems unconceivable to me now!

Once again, Tracy Wolff amazed me with her imagination, world building, plot twists, banter. That series is my guilty pleasure.

Is the writing that poetic or with lots of flourishes? No.

But what Tracy has mastered it’s the art of good banter, relatable and loveable characters, fast paced but not rushed plot and incredible world building. Plus, a bunch of kickass side characters.

First to shine: the world building an imagination

We already had one of my favorite tropes with the supernatural academy but here, we’ll get real dragon festival that will literally blow your mind and put stars in your eyes! The Dragon Court was…flamboyant!

If that wasn’t enough, you’ll also go to a giant city and not in a big city but city with giants, filled with markets and protective trees.

And even more than that, you’ll learn about prison keeping paranormal creatures in and featured like Dante’s Inferno. Of course, you’ll have a whole lore inside, barter between very dangerous prisoners, brawling and some serious ass kicking.

Second characteristic of this series, the banter and humor!

I have said it already but the chapter’s titles have me snickering many times.

Between Flint’s goofiness, Hudson’s dry sarcasm and Grace’s quick retorts, I was really having a very good time!

What happened to Jaxon, twice in this book, was totally unexpected.

What we seem to guess about Grace too and I have an inkling that a new character is related to her.

The ending is a big cliffy and I don’t know how I’ll wait!

Last but not least: the characters

What I adore in this series is that we don’t only focus on one main character but we get a whole bunch of side characters who are way more than decoration! Grace has an amazing growth, Hudson is brilliant, Jaxon is still drool worthy and their band of friends are all badass in their own way!

Important note now: I don’t usually like love triangles but this instalment highlight why Grace went from Jaxon to Hudson. It made the “move” seem organic and not forced at all. When she arrived at Katmere, she really needed protection and that’s what Jaxon needed too: to protect someone. He came from having killed his brother so I guess his soul needed to do something good to heal. But in Crush and certainly Covet, Grace has grown and she needed a mate to trust in her abilities, to protect her but even more, in giving her wings, in nudging her to use her own badassery. And that’s exactly what Hudson did! He freed Grace. He admires her and has an unconditional faith in her and her strength.

Now the big question is: who do I bribe to get an ARC of court?????