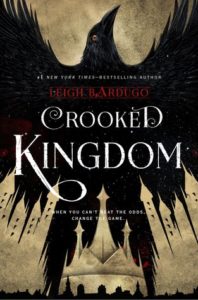 Welcome to the world of the Grisha.Kaz Brekker and his crew of deadly outcasts have just pulled off a heist so daring even they didn’t think they’d survive. But instead of divvying up a fat reward, they’re right back to fighting for their lives.Double-crossed and badly weakened, the crew is low on resources, allies, and hope. As powerful forces from around the world descend on Ketterdam to root out the secrets of the dangerous drug known as jurda parem, old rivals and new enemies emerge to challenge Kaz’s cunning and test the team’s fragile loyalties.

A war will be waged on the city’s dark and twisting streets – a battle for revenge and redemption that will decide the fate of the Grisha world.

First of all, I don’t know if I love or HATE Leigh Bardugo!

This book is brilliant! The scheming  is incredible (I don’t know how Leigh plans and plots all this! If she has kids they can NEVER hope to outwit their mom!)  and I would have given it 6 stars IF Leigh Bardugo did not tear my heart out of my chest!

I won’t elaborate further as I don’t want to spoil but those who have read it will understand when I say that I was crying in the street, walking blindly through my tears while listening to THAT MOMENT in the book.

This book was as good if not more than Six of Crows.

I won’t delve into the characters as I’ve talked about them aplenty in my review that you can find HERE.

Leigh Bardugo is a master at plotting that’s for sure. Or is it Kaz Brekker?

He’s carefully thought out every detail of a diabolical plan …just to be outsmarted and sent back to the beginning. You’d think the crew would admit defeat, right? Especially when the odds are against them.

The more setbacks they get, the stronger the comebacks!

I honestly don’t know how someone can think of something so elaborate. Can plan so far ahead, guessing all the moves and reactions of your enemies just to plan and counter them when they come to life!

As we follow different POV there is always someone going on an errand, playing his part, fighting, manipulating,  being beaten…. Not one single dull moment.

All voices are easy to distinguish as each character has his own traits:

Kaz is a survivor. Driven by revenge. “Brick by Brick I will destroy you.”

He became a formidable opponent. And he is barely 17! But he has so many demons! There will be hope and hints by the end of the book that he could heal one day but the way will be long!

If many adore Inej, my favorite character of the series is still Nina. I love her humor. The way she is flirting. Her smart. Her selflessness. Her courage. Her dedication.

She is suffering from the Jorda Parem. She is resisting but she has no appetite and her power has changed. She begged Matthias to give her more but he’s resisted.

In this one Nina will be the one who will suffer so much! Her burden will be enormous.

Yet there is also light in the story. I love Nina’s humor and her banter with proud and proper Matthias was simply delicious! I loved witnessing the proud Fjerdan being all flustered by Nina!

Matthias loves her so much. Above all else, he respects Nina and wants to court her properly.

Matthias. My big blond druskelle.  My book boyfriend. The one I really wanted to find happiness. Nina and Matthias plan to change mentalities, to open the eyes of the druskelle about the grishas. They want to make a world where everyone can live in.

In this book you’ll have:

-secrets. Lots and lots of secrets;

-a fantastic crew of misfits;

-open endings making me one-click on King of Scars audiobook!

I am happy that I did not let the Shadow and Bones trilogy deter me from giving Leigh’s a second chance because first Ninth House then the Six of Crows duology were simply epic!