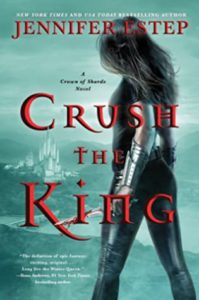 A fierce gladiator queen must face off against her enemies in an epic battle in this next thrilling installment of New York Times and USA Today bestselling author Jennifer Estep’s Crown of Shards series—an action-packed adventure full of magic, murderous machinations, courtly intrigue, and pulse-pounding romance.Queen Everleigh Blair of Bellona has survived the mass murder of the royal family, become a fearsome warrior trained by an elite gladiator troupe, and unleashed her ability to destroy magic. After surviving yet another assassination attempt orchestrated by the conniving king of Morta, Evie has had enough. It’s time to turn the tables and take the fight to her enemies.

There is no better opportunity to strike than during the Regalia Games, a time when warriors, nobles, and royals from all the kingdoms come together to compete in various sporting events. With the help of her loyal friends, Evie goes on the attack at the Regalia, but things don’t turn out the way she hopes. Soon, she is facing a terrifying new threat, and she will have to dig deep and learn even more about her growing magic if she has any chance of defeating her foes.

Because to secure her throne and ensure her kingdom’s survival, Evie must think like a true Bellonan: she must outsmart and outwit her enemies . . . and crush the king.

She did it again! Swept me off my feet.

And that’s where I just wonder why I waited so long to read Jennifer Estep’s books! I had the same reaction when I read the Red Winter trilogy by Annette Marie.

Both Jennifer and Annette are not as well known as Cassandra Clare, Sarah J Maas and the likes but dang! Can they write epic stories that don’t let you go before the last page!

I began this series as I had seen that Lauren Fortgang, one of my favorite narrators, was narrating the books. But if the narrator can add something to the story, a badly written or uninteresting story will never feel good, whatever the narrator’s talent!

I have been really awestruck by Jennifer Estep’s gift to create a kickass heroine.

Evie is the underdog at the beginning of the trilogy. In a universe filled with magic, she is a mutt, a weak user. Her only talent that we can see is her extreme sense of smell.

Not as glamorous as weather mage, or ogre or…

But if you have read the first two books, you know there is more than that to Evie!

I loved how Jennifer Estep made us slowly discover the extent of Evie’s power. And that’s not as if she had tricked us and hidden something from the beginning! No Evie had no idea the magnitude of her true skills and she learned to master these, right alongside us!

Characters who don’t begin as all powerful is one of my favorite tropes. Because they have to work to better themselves. Kind of the majority of us. And that makes them so relatable!

Evie was never fated to become the queen of Bellona. She was no heir of the queen, no chosen one from a prophecy. No, she came into power after a massacre and since she had to prove to everyone in her country, especially every noble that she was worth of the crown.

Not knowing her true power in the beginning, she learned to defend herself with a gladiator troupe. And the beginning of her training was brutal. Countless times more experienced gladiators kicked her behind. But she is cunning and determined.

That made her rise into power even more interesting. Exhilarating even as I cheered for Evie all the time!

This third book was less focused on her hot love story with Sullivan but rather on her goal to finally crush Maximillian, the Morten king.

I loved all the scheming and plotting. Evie plays the long game and things will fall into place that you had no idea before. I was amazed by Jennifer Estep’s scheming!

It was a thing of beauty seeing Evie outsmarting the evil king!

But the king is powerful So, so powerful! I had no idea how powerful and cruel the king was.

One thing that I also really appreciate on top of the “kicking butt” and “outsmarting” and “goading the villain” was the chapters about Evie’s past. Piece by piece we learn more about what happened when she escaped her parents killing. And it all came together splendidly, many years later.

I am sad to leave this world. To leave Evie, Sullivan , Paloma and everyone else behind.

This has been a epic journey and it won’t be my last book by Jennifer Estep.

Have you read this series? Or other books by Jennifer Estep?