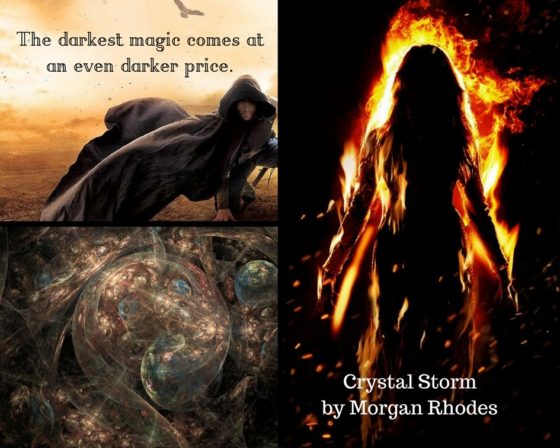 Frustrating, transitioning and exhilarating by the end.

This book had a slower pace. I was constantly alert and waiting for something big to happen. When it did  it was big but ended on a cliffhanger! I need the next book now!!!!

What I did not love and was surprised about it:

Yes things happened but I always felt like I was waiting for something more. I think this book was a transition in the series. All pawns were aligned for a key event to happen but they were moved quite slowly;

I had many hope by the end of the fourth book. I thought  “AT LAST!”. They confessed their mutual love and I was happy. I loved Cleo’s evolution. She grew from a spoiled and pampered princess to morph into a survivor and fighter. She is smart. She’s learned to navigate in a viper’s nest to stay alive and get her kingdom back. She’s a real chameleon and I admire her resilience. Magnus was not the cold hearted monster he believed to be. He has fire and goodness underneath it all even if he is ambitious. He is my favorite male character. I wanted for them to enjoy some well earned love together but it was far from simple! FRUSTRATING! One step forward, one step back;

–The multiple points of view.

The story is told alternately from Amara, Jonas, Cleo, Lucia and Magnus’s perspective. I usually love having different intakes in a story but as we had one chapter by Magnus and soon after another one by Lucia etc. it kept the pace quite slow and made a frustrated even if interested reader of me.

What I did love:

Shocking I know as I claimed not loving what Lucia became in the fourth book. But as I predicted she’s redeemed herself in this book. She still has reactions of a haughty princess sometimes but she honestly regrets what she’s done and is ready to atone for her sins and accept her fate;

He’s been the surprise in this book. Since Lyssandra’s death he seems more mature and less foolish. An unexpected twist in the story will make for a very pleasant surprise. He’ll really be “the good guy” in this story.

–The plot and the ending.

I know I’ve just complained it ended on a cliffhanger and as frustrating as it can be it was a “grand finale”. The last 10% of the book made for the slower pace. Events kept happening faster and faster, Jonas helping beat up Fate. Lurking enemies made their moves and I can’t speak of what happened to Magnus without wanting to scream!

To sum it up: it’s a transition book leaving us bereft and wanting for more, more, more!