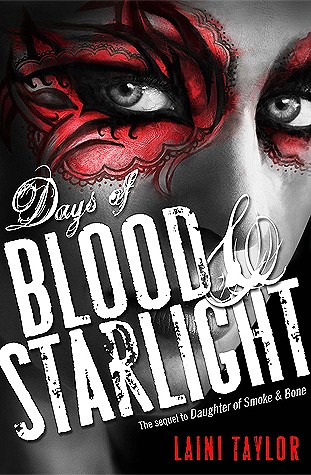 Once upon a time, an angel and a devil fell in love and dared to imagine a world free of bloodshed and war.This is not that world.

Art student and monster’s apprentice Karou finally has the answers she has always sought. She knows who she is—and what she is. But with this knowledge comes another truth she would give anything to undo: She loved the enemy and he betrayed her, and a world suffered for it.

In this stunning sequel to the highly acclaimed Daughter of Smoke & Bone, Karou must decide how far she’ll go to avenge her people. Filled with heartbreak and beauty, secrets and impossible choices, Days of Blood & Starlight finds Karou and Akiva on opposing sides as an age-old war stirs back to life.

While Karou and her allies build a monstrous army in a land of dust and starlight, Akiva wages a different sort of battle: a battle for redemption. For hope.

But can any hope be salvaged from the ashes of their broken dream?

Short review here for a sequel that I expected to love but…didn’t.

When I first read Daughter of Shadow and Bones I fell under a magical spell.
The world building was amazing, the mystery strong and the love story was so good!

I expected a lot from Days of Blood and Starlight. Maybe too much.

It took me the half of the book to finally fall into it. By that point, the action kicked in and I stopped being so angry with Karou and Akiva.

The first half was extremely frustrating to me as I disagreed with all of Karou’s action!
I understood that she was deeply hurt and had not a lot of hope. I also got that she wanted to save her dying race. But working with Thiago was such a bad choice! She should have known better! After what he did to her.
And also I didn’t like that she was in pain all the time. That made me uneasy. What can I say, I don’t like my characters suffering.

It felt like she had to atone for all the sins.
Yet if you thought about it, her only crime had been to love!
It was Thiago who beheaded her. It was Thiago who revealed the chimaera’s secret, not Karou!

And Akiva had me seething when I thought that he was doing what Laini wanted us to think he did. Sorry I am being vague as I don’t want to give away any spoiler.

I felt frustrated and it felt like a filler to me.

The saving grace of that first half was Zuzana!
I so love Zuz! She was a true ray of sunshine. Sassy and fiesty and so loyal!

Then, the second hald was so much better!
The characters behaved like I had expected them to do all along. And the plot thickened with a huge twist by the end.
If not for that second half I wouldn’t bother with that series any longer. Especially as the romance was practically absent from that book and I am a romance reader!

But now, I am determined to read the last instalment and I hope that it will be amazing right from the start.