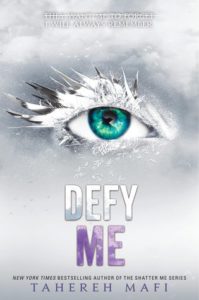 The gripping fifth installment in the New York Times, USA Today, and Publishers Weekly bestselling Shatter Me series. Will Juliette’s broken heart make her vulnerable to the strengthening darkness within her?Juliette’s short tenure as the supreme commander of North America has been an utter disaster. When the children of the other world leaders show up on her doorstep, she wants nothing more than to turn to Warner for support and guidance. But he shatters her heart when he reveals that he’s been keeping secrets about her family and her identity from her—secrets that change everything.

5 stars for the background story

5 stars for the once again gorgeous cover

3 stars for the plot

« She laughs and looks away.”No”, she says. “Definitely not.”

She looks up at me then, and I realize, with a thrill, how close we are. There is a palpable heat between our bodies, and her eyes are big and beautiful, blue green. Like the globe, I think. Like the whole world.”

You know when an army is forced to retreat an regroup, planning its next move against the enemy? Yes? Well that’s how this book feels.

Nothing is as it seems either and you’ll be in for huge surprises right from the start!

Told from Kenji, Juliette/Ella and Warner point of view we learn everything about Juliette’s past.

We begin right where Restore Me ended and let me tell you that what awaits Juliette is no picnic! Pain was her constant here and I wanted to kill the ones hurting her.

Honestly the families are completely crazy!

We will follow Kenji and his developing love interest, the only chapters lightening a story centered on torture, mental and physical.

I also loved the bromance between Kenji and Warner even if they would die before admitting it!

I can’t go into more details or I would spoil your fun. Just know that Warner was just …incredible, sweet, touching, beautiful, perfect and what he did by the end ….sigh.

I read this story in nearly one sitting but it left me wanting for more. I think the next book will be about a big move and I hope packed to the brim with action.

Certainly if you’ve read the other books  in the series!

Have you read this book or that series?