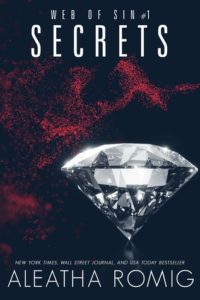 The twisted and intriguing storytelling that you loved in Consequences and Infidelity is coming back at you with an all-new alpha anti-hero in the dark romance series Web of Sin, by New York Times bestselling author Aleatha Romig. I’m Sterling Sparrow. You’ve no doubt heard my name or read it on the top of tall buildings. There’s more to my business—my realm—than what is seen aboveground. Within the underbelly of one of America’s largest cities lives a world where a man’s word is either his most valuable tool or his most respected weapon. When my father ruled that world and that city, he promised me someone who would one day make my reign complete. Since that day, long ago, Araneae McCrie has been mine.

My father is now gone.

The city and the underbelly are now mine.

The time has come for me to collect who was promised to me, to shred her life of secrets and make her who she’s always been—mine.

*Secrets is book one of the Web of Sin trilogy.

Morally you want a man to be:
A) All shades of grey;
B) Pristine

Physically you melt for:
A) Batman
B) Preppy accountants

In bed you would expect him to be:
A) conquering, a little bit kinky;
B) Plain vanilla

If you knew he’s been stalking and monitoring you, bugging your devices you would be:
A) Infuriated and slap his face before kissing him senseless because oh boy! Did he want to protect you!
B) Filing a complaint to the nearest police station.

And what about his job? Would you
A) agree not to look into some shabby parts of it?
B) need to know all about it especially the hair color of his secretary?

If you answered A to most of the questions it means Sterling Sparrow is your next book boyfriend! If you answered B chances are high you will hate him!

Secret is Aleatha going back to her dark business. No she is not a mobster, well I don’t think she is, but she is the queen of edgy stories filled with mysterious, commanding and powerful sexy male characters.
She weaves a tale of secrets, treason and danger. Araneae’s past is hidden in the shadows and even she does not know her real identity. She knows she has to stay far from Chicago as the bad man is waiting to catch her and hurt her.
When she has to go back and meet her nemesis she won’ know who to believe. Who is on her side and who isn’t?

Even if she’d really try Sterling is determined not to let her escape. She is HIS.

I read secret with glee as I love it when Aleatha goes back to the dark side of the force. Secret is captivating built upon strong characters, plane crash, fires, car crash and an enigma to be solved.

Who are Araneae’s parents?
Why is she seen as Sterling’s possession?
Is Sterling friend or foe hiding his game?
Why….

See you at book two Lies hopefully with more answers!

Have you read Aleatha’s stories?