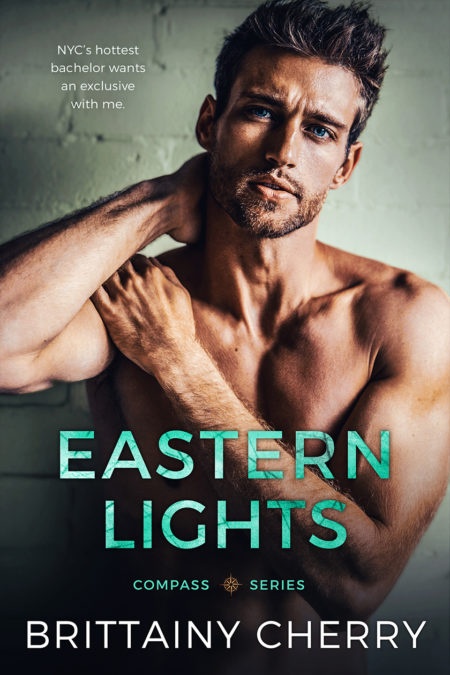 I once met a man on a cold Halloween night. He dressed as a superhero, and I dressed in red. For one night, I was his break from reality, and he was the temporary fix for my broken heart.Two years later, I was given the opportunity of a lifetime to become a senior editor at one of the biggest magazine companies in the world. The only catch? Nail an exclusive interview with New York’s finest bachelor: Connor Roe. To the rest of the world he was becoming one of the wealthiest men in New York City. To me, he was simply my once upon a time superhero. My job was to get an exclusive interview with New York’s hottest bachelor. Never in my life did I expect him to want an exclusive with my heart, too. The only problem with my growing feelings for him? I was set to marry his new business partner.

Download your copy today or read FREE in Kindle Unlimited!

4,5 stars and Brittainy at her best!   When I read Southern Storms, another book of Brittainy that I adored, I wanted a book about Connor! He stole my heart there with his positive attitude, his jokes, his love for his mom…   And I got it!!!!   I swear Brittainy did Connor justice in Eastern Lights. He is now one of my utmost favorite book boyfriends.   I used to love @**holes heroes but this has passed and now I crave good heroes! Connor is just a good person through and through. He loves making people happy. That’s how he feels happy. He also adores his mom and honestly a mama’s boy is so sweet! And not as in: “I can’t leave my mom” but more of “I will care for her and work hard to earn money for her treatment”. He also is a very hard worker and has succeeded in a field where so many crush their opponents, stab them in the back whereas Connor is fair and honest. He has an incredibly strong moral compass. I also adore that he is a goof and tells lame jokes every day! “I was like a fantastic fungus—I grew on people.”   Add to this that he looks like Captain America, with biceps upon biceps and that he takes such a good are of Aaliyah and you probably can understand why I am smitten with him!   But I am gushing about Connor when Aaliyah is also an amazing heroine. She was kind, moving, fragile and strong at the same time. I have rarely seen a couple better suited for each other. Everything between them felt effortless. Aaliyah has been abandoned by her mother and raised into the foster system. When we meet her, she has been left by her boyfriend and is brokenhearted. She will meet Connor or rather, Captain America, on that Halloween Night and that will be a magic moment. One of these perfect nights. They both will be changed by this encounter but soon Aaliyah will go through an unthinkable ordeal. I cried for her. I won’t say more as I don’t want to spoil your read but she didn’t deserve that new slap from fate. But she will accept this chin up and will live every moment with intensity.   When two years later she will meet Captain, it will be again an awful day for her. I swear I just wanted to take he in my arms and give a big hug! She has been battered by life and could have been bitter but she always gave to people. She was always kind. But she felt so lonely and suffered, rightly so, from abandonment issues. I honestly wanted to adopt her, that’s how much I fell for her.   I won’t talk much about the plot just say that their story is magical, moving, sad and joyful. This is just a perfect romance. I loved how Connor went out of his way to make her feel important! “Sorry, was I being too loud?” she asked. “No, no. It’s not that.” I frowned and crossed my arms. “I just wanted to say you’re important.” “What?” “You’re important. I want you to know that fact to counter any person who’s ever made you feel as if your existence isn’t of value. This world is better because you’re here.”     And now Brittainy, I want a story about Damian! The “grave digger”, the somber sidekick that has so much potential for your next book!   If you love romance, just read this one, you will thank me!

Aaliyah    His playful look shifted a bit as he looked my way and nibbled on his bottom lip. “So there was a recent breakup.”  “He broke up with me about five weeks ago.” “What an ass.”  “Yeah, but I love him. I wish I could say past tense, but here we are. My roommate Sofia said the best way to get over a man is to get under another one, but I can’t even consider that right now. The last thing I want to do is sleep with someone else.”  “Plus, sex wouldn’t fix a broken heart and—holy shit!” He clapped his hands together and hopped up from the ground to a standing position. The grin on his face was so big, but I didn’t understand what caused his sudden shift. “I got it, Red! I know what we can do to help you.”  I arched an eyebrow and stood. “I’m confused.” “I know, I know, and you’re going to think I’m crazy—which, maybe I am—but here’s the deal: You can’t bang your way out of a heartbreak. That’s not how love works. Love isn’t a physical connection; it’s an emotional one. Plus, after breakups, people replay the good memories over the bad in their minds and start thinking they somehow failed, when, in reality, the bad probably always outweighed the good. You simply held the good tight in your grip because it was few and far between in the end. Otherwise, the good would’ve been enough to keep you together.” I hated that he was speaking facts. Over the past weeks, all I’d done was replay all the good times Mario and I had together. My mind was stuck on a loop of moments that meant the world to me in my past relationship.  There were only a handful of good memories, yet I simply played them on repeat, making them feel bigger than they already were. Mario was a master at doing the bare minimum, and I celebrated that fact as if he was a god. It wasn’t his fault he gave me mediocre love. It was my fault for accepting it.  “So what’s your point?” I asked.  “Do you believe in destiny?”  I chuckled. “Don’t tell me you do.”  “I think everything happens for a reason, even if the reasoning isn’t clear as day right away. Maybe that’s why we met tonight, Red, because we were meant to. Maybe I had to get socked in the eye and whipped with a lasso because we were supposed to cross paths so I could help you get over your ex.” “How?” “The best way to get over a love is to find a stronger connection with another person. So, I present to you, your Halloween love story.” He took a bow as if he was making any sense at all. I stood still, confused as ever. “Am I missing something?” “Clearly, because you’re looking at me as if I’m having a mental breakdown—which, I mean, is probably accurate.” He cleared his throat and stood taller as he smoothed his hands over his chest. “I’m asking you to fall in love with me.”  I snickered. “I’m sorry, what?” “Give me the chance to make you fall in love with me before the sun comes up in the next”—he glanced down at his phone—“five hours or so. It’s just past midnight. Give me those hours to make you fall in love with me. Then we’ll end the love story on a good note. No tragic heartbreak, no hard moments or relationship struggles. No cheating or scandals. Just two people who fell in love, then life or, in our case, morning made them say their goodbyes.”  “You really think two people can fall in love within five hours?” “I don’t know.” He shrugged and held his hand out toward me. “Want to try?” I should’ve said no. I should’ve laughed off his crazy idea and ended the night right there on the rooftop, but I didn’t want to go home. I didn’t want to be alone. But most of all, I wanted more time with Captain, even if only a few more hours. Even if there wasn’t a real chance of me falling in love with him but just a chance of more time to feel happy.  Happy.  I felt happy.  I hadn’t even known how much I’d missed happiness until it found me that night.  So, I did what any insane girl would’ve done. I took his hand and agreed to the idea of falling in love within the next five hours.  He clasped my fingers with his and pulled me in close to him. It was the closest we’d stood since meeting, and the way he looked down into my eyes caused the butterflies to intensify. He had to be well over six-foot-two as he hovered over my five-foot-eight frame—and that was with heels. The way he looked at me made me feel important, as if he was going to give this crazy plan of his all that he had.  “Knock, knock,” he said, with the goofiest grin known to mankind.  “Who’s there?” “Will you fall in love with?” “Will you fall in love with who?” “Me.”

About Brittainy Author Brittainy C. Cherry is an Amazon #1 bestselling author. She has been in love with words since the day she took her first breath. She graduated from Carroll University with a Bachelor Degree in Theatre Arts and a minor in Creative Writing. Her novels have been published in 18+ countries around the world. Brittainy lives in Brookfield, Wisconsin with her fur babies.