6 “we’ll find a way together” stars at least.

The long path to the throne has only just begun for Aelin Galathynius. Loyalties have been broken and bought, friends have been lost and gained, and those who possess magic find themselves at odds with those don’t.

As the kingdoms of Erilea fracture around her, enemies must become allies if Aelin is to keep those she loves from falling to the dark forces poised to claim her world. With war looming on all horizons, the only chance for salvation lies in a desperate quest that may mark the end of everything Aelin holds dear.

Aelin’s journey from assassin to queen has entranced millions across the globe, and this fifth installment will leave fans breathless. Will Aelin succeed in keeping her world from splintering, or will it all come crashing down?

And a big  don’t put a ” Divergent” or “Fifth Wave” on me Sarah because I swear I’ll hunt you into your next life if you do!!!!

Seriously, I never would harm a single hair on Sarah J Maas’s head but I really cross my fingers, pray to whatever gods, burn candles,… everything to ensure I get an HEA once the series will end because right now, it does not bode well!

Few authors can keep my interest for more than three books in a series that cannot be read as stand alone. So far, I can only name Cassandra Clare, Anne Robillard, Morgan Rhodes and their queen: Sarah J Maas.

If you’ve never read this series but are a fantasy fan, it’s an absolute must read.

We began the first book with three, four important characters: Dorian prince of Adarlan; Chaol his captain of guards, Nehemia the foreign princess and THE main character: Celaeana Sardothien.

It’s now the fifth book of this series and it’s brimming with characters that are far more than side characters. They all are so interesting, well portrayed and play major roles in the story I could not envision rea

ding these books without them. Manon Blackbeak, Lysandra, Aedion, and now Lorcan, Elide, Gavriel or Fenrys all add layers to the story. That’s without even speaking of Rowan, my favorite fae warrior. Haaa, Rowan……… you can insert a sigh and a little drool here. 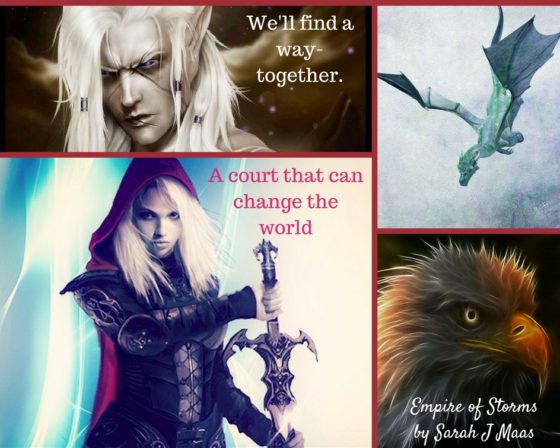 All these characters would already make for great heroes but the star of the series is of course the “rare, staggering beauty, clever, fascinating and very talented” Celaena Sardothien/Aelin Ashryver Galathynius, Queen of Terrasen.

Fact one: I want to be Celaena/Aelin when I grow up.

That chick is so badass it’s unbelievable. If she had balls they would be so big she could never walk without trampling them!

She’s sassy, courageous, gifted has more lives than cats and is so selfless ready to give her live to save her kingdom, the whole world.

Her only flaw: she likes to plot behind the scene and does not tell her friends about her moves. She’s working on it in Empire of Storms but she chooses carefully what to reveal and to whom. Translate: if she thinks her friend or lover would try to stop her for fear of losing her, she won’t tell and they’re in for some big reveals and turnarounds.

Empire of Storms made me tremble and held me on edge the whole 693 pages. I never found a word was useless, I never thought something was boring and I certainly never guessed all the moves, be it from Aelin from Erawan or Maeve.

It’s fast paced, told from multiple point of view as different characters go on their separate journey just to meet or collide all together once more.

I loved following Manon and Abraxos on their desperate flight, battling Ilkens and mortal wounds. I was waiting expectantly for Elide to finally reach Aelin wondering how her relationship with Lorcan would evolve.

And of course I hunted every move Aelin made, trying to guess her next decision to beat Erawan, gain allies to fight for Terrasen, outsmart Maeve and resist these demanding gods.

I held my breath so many times it’s a miracle I’m still alive.

We learn about Aelin’s destiny, what she’s meant to accomplish and let me tell you it’s heart breaking/world shattering. If all goes as foretold I’ll need at least one year of comfort food to recover. But don’t put the cart before the horses as I still have faith in Sarah J Maas’s scheming mind. She certainly has proven she has many tricks in her bag.

Be ready for a cliffhanger from Hell and very big reveals in this fifth installment that’s just dethroned Heir of Fire as the best of the series in my books.

Sarah, you’re a genius and I love to hate you when you make me hurt and bleed alongside YOUR characters that have now become MY friends.