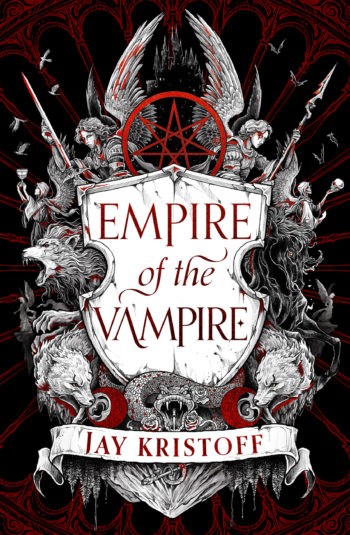 It has been twenty-seven long years since the last sunrise. For nearly three decades, vampires have waged war against humanity; building their eternal empire even as they tear down our own. Now, only a few tiny sparks of light endure in a sea of darkness.

Gabriel de León is a silversaint: a member of a holy brotherhood dedicated to defending realm and church from the creatures of the night. But even the Silver Order couldn’t stem the tide once daylight failed us, and now, only Gabriel remains.

Imprisoned by the very monsters he vowed to destroy, the last silversaint is forced to tell his story. A story of legendary battles and forbidden love, of faith lost and friendships won, of the Wars of the Blood and the Forever King and the quest for humanity’s last remaining hope:

“And in the end, I knew I’d not take back a breath of it. Not the bliss I knew then, nor the pain I felt now. Not all the forsaken hours I’d spent without them, the ache of my lips without Astrid’s kiss, the emptiness of my arms without Patience’s embrace. In those few moments I had them, and if only then, I was immortal. Because they were immaculate. And they were mine.”

I know this book has been hyper hyped. Jay Kristoff has been attacked because there were so many special editions of his book. The publishing house really milked all they could here but…

This book is epic fantasy. It reads like a crossover between Brandon Sanderson and John Gwynne’s books but with a distinctive Jay Kristoff’s signature in Gabriel’s sarcasm and dry humor.

The penmanship is outstanding, fitting for that dark epic medieval tale happening in a world where the Deads slowly overpower the livings after an eternal night fell on that planet.

Equally vicious and graceful, Jay’s writing is akin the deadly strike of a sword: it makes your heart bleed and your soul weep.

I read that mammoth book as fast as I could because I was totally entranced by Geb’s story and that very dark new epic fantasy universe.

This truly is in the spirit of “Interview with a Vampire”.

Switching between the now and two past periods, Gabriel’s teenage years at San Michon and a more recent past, Gabriel’s story slowly unravels, told to Jean-François vampire and Historian of Margot Chastain.

Don’t expect a flawless and shining knight in this story, even if Gabriel de Leon is a chevalier (knight) and a Silversaint.

Gabriel is the definition of a anti-hero. Bastard son of a noble mother and a vampire, he has urges left to him by his monstrous father.

“You have been both blessed and accursed, called by Almighty God to this holy task.”

He comes in all shades of grey. He has dreams of glory as a young boy, even as an initiate when his master Greyhand tries to drills- into him that he only serves God and not his pride.

. With no real abilities he’ll begin at the bottom of the food chain in San Michon. But stubborn, prideful, young Gabe will work hard and fight even harder to become something feared and respected among his peers, the Silversaints

“Some people are born lucky, coldblood. And some people make their own.”

Addicted to Sanctus, slowly eaten alive by his hunger for blood, knowing that his fate leads to madness sooner of later. He is a monster carrying the sin of his father and trying to redeem his soul by protecting others from the Deads and other accursed creatures.

Gabriel de Leon will fight like a lion, succumb to vice of the flesh and hunt vampires relentlessly. He is a magnificent hero as well as a glorious stubborn bastard in all sense of the word.

“Your past is stone, but your future is clay. And you decide the shape of the life you’ll make.”

Gabriel, his brothers and the nuns will accomplish feats worthy of heroes. Tales minstrels will sing thousand years after. But despite his high feat, there are some mistakes that can’t be forgiven by the sanctimonious Silversaints.

That’s when Jay Kristoff makes us think about what is faith. What is religion. What is good and what is evil. Are you determined by your DNA? By your upbringing? Do you have to believe everything that’s been told to you?

I can guarantee that there will be another witch hunt waiting for Jay Kristoff on bookstagram as people will always interpret these ideas the way they want and if they seek faults, they’ll find them.

I personally thought it very confrontational, insightful and thoughtful even if his ideas might seem blasphemous.

“What if you ask for something that’s not his will? You want him to alter the course of the divine plan? For you? See, that’s the grift of it all. That’s the genius. You get what you pray for? Huzzah, God fucking loves you. But your prayers go unanswered?’ I snapped my fingers. ‘Just wasn’t part of the plan.’”

From naïve and fervent young boy to disillusioned, sarcastic hero, we switch back and forth following Gabriel’s story and I can honestly say that I loved both times equally.

This is only the first book of a series and when you read Jay’s bio it is said that “he doesn’t believe in HEA”. So we’ve been warned and even if it ends on a plot twist, I smell tragic yet heroic ending for that series! We’ll see if I am right.