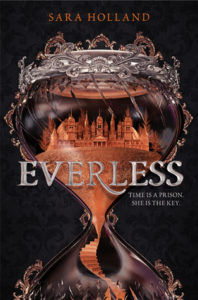 In the kingdom of Sempera, time is currency—extracted from blood, bound to iron, and consumed to add time to one’s own lifespan. The rich aristocracy, like the Gerlings, tax the poor to the hilt, extending their own lives by centuries.No one resents the Gerlings more than Jules Ember. A decade ago, she and her father were servants at Everless, the Gerlings’ palatial estate, until a fateful accident forced them to flee in the dead of night. When Jules discovers that her father is dying, she knows that she must return to Everless to earn more time for him before she loses him forever.

But going back to Everless brings more danger—and temptation—than Jules could have ever imagined. Soon she’s caught in a tangle of violent secrets and finds her heart torn between two people she thought she’d never see again. Her decisions have the power to change her fate—and the fate of time itself.

I was lucky to get an ARC of Everless in my Fairyloot box.

As the book was so hyped and promoted everywhere I could not wait to read it!

Everless is a very original story build on a brand-new world at least one I had never read about before.

How many stories do you know about people whose blood can be drawn and their living time goes down with it? Their blood is melted into coins? Said coins can be drunk when poured into some liquid and give more living time to the drinker.

Of course you’ve got it: the poor sell their lifetime and the rich can live eternally. This is another kind of social classes battle.

The world is filled with myths and tales on the Sorceress and the Alchemist. They caused this strange phenomenon with living blood being turned into coins. Somehow the Alchemist tricked the Sorceress. She was immortal and he stole her immortality as well as her heart.

This is a very small and short version of the tale but it’s crucial to understand this universe.

As the summary says: “The rich live for centuries; the poor bleed themselves dry.”

Jules was a loveable heroine but I would have loved knowing her even better. What was missing for me to connect fully with her I still have no clue!

Jules is poor and lives with her father. They’ve been chased from Everless ten years ago and her father is slowly dying as he keeps giving his blood to feed her. Jules wants to save him and she’ll take her chance to go back to Everless to help prepare the wedding of Roan Gerling with the Queen’s daughter.

Jules had her heart crushed thinking about Roan marrying someone else. He was her childhood friend/crush before the Gerling family evicted them. She despises the Gerlings especially Liam. Liam is Roan’s brother and he’s always been known for his cruelty. What he’s done ten years ago had Jules and her father expelled from Everless.

You have a poor but brave girl ready to sacrifice everything to save her father.

She is pinning after beautiful and kind Roan. Liam is the villain of the story. At least one of the villains as the Sempera’s Queen is evil.

Jules has a special power. She can stop time. Make it freeze. It is her secret and must stay hidden for she could be abused and used.

Other villains are hiding in plain sight. Appearance are deceiving and friends are not always who you thought they are.

I know everyone will find Roan attractive. He is the “good” Gerling but I did not like it very much. I found him too “weak” and a little too much interested in girls. He could proclaim that he was “very happy” that Jules was back I did not believe him to be a right fit for her assuming he could go out of his engagement one day.

I found Liam the most interesting character of the story. I love heroes in shades of grey. The ones depicted as the villain but you feel there is more to it. I could not wait to peel Liam’s layers and see what he was hiding.

Back to the plot. Jules is coming back to Everless but has to hide her true identity as they’ve been persona non-grata for years now. Her father warned Jules against the Queen. To never let the Queen see her. As you can expect Jules will try to get close to the Queen after some dramatic event turned her life upside down. She will try to discover the Queen’s secret all along making friend with her daughter Isobel and her lady in waiting Carol. Jules hides so many secrets the tension was permanent.

The plot is intricate and many twists fill this story built around the Sorceress and the Alchemist. I was never bored!  I did not expect the truth about Jules either. Nothing let me think what she was. I followed a wrong trail like I think most of the readers as it’s what Sara Holland intended.

All in all I read this book literally in one sitting and was captivated by the story.

– I did not fall into it right away as it begins on a descriptive part;

-I liked Jules but did not love her and I still don’t know why! It’s very frustrating.

I hope to read more about Liam in the sequel. I already know I will read it as I’m very happy with how it turned out.

5 stars for the original world building

4 stars for the plot

Have you already read it? Or is it on your wish list?

PS I’ve made my first banner with Photoshop so sorry if it’s still imperfect. I’m an apprentice 😉