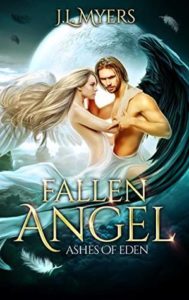 Lucifer was the brightest archangel of them all…until he fell in love.
Before Earth there was Heaven, a place of immortality and subservience where angels existed to watch the world transform. Until one angel changed everything. Stripped of his essence, flesh replaced light, and the weight of Lucifer’s new wings bore down on him like a burden…until he saw her.By his side since the dawn of time, Gabriel was Lucifer’s closest companion in brilliant light. But seeing her in the flesh changed him. Lucifer can’t look away. And not because she’s perfection personified. Beyond Gabriel’s cascading hair, porcelain skin, and blushed lips, her silvery eyes are the windows to her very soul and her eternal hope—even for an unworthy angel like him.And Lucifer is unworthy.His thoughts of her alone are a sin. The intimate acts he imagines committing with her could cost him more than his place amongst the archangels. But he can’t stop how he feels when she looks at him. When Gabriel’s gentle hand lays flat over Lucifer’s chest, his heart beats faster…for her.

Controlling Lucifer’s forbidden desires will be impossible, but giving in to them could cost him the one being he can’t live without.
New Adult/Paranormal Romance/Angel/Demon
Warning – This book contains some language and sexual situations.

If you love angel series from the likes of J.R. Ward, Anna Santos, I. T. Lucas, and Lauren Kate, then this story of a love that not even Heaven and Hell can tear apart is just for you.

I beta read this book as I am a huge JL Myers fan. My infatuation with her story began with her Blood Bond series and it’s never stopped! If you are a fan of Vampire Academy but with an even more elaborate plot read this series by the way!

When I read Ashes of Eden I was very surprised.

Because Michael and God are NOT the good guys or at least not in my books!

I was rooting for Lucifer. Yes, Lucifer you know Morning Star, the Devil, blablabla…

Why was he not allowed to show his love like he wanted if it did not hurt the other?

Why was he wrong in being hurt when human killed the others, raped women etc. and wanting to prevent it?

And why Michael’s manipulation to push Lucifer to sin would make him a good guy when he wanted excatly the same as Lucifer and I am sure had sinful thoughts?

So what’s this story about? It’s about the birth of Angels when they were given flesh and bones. I must say that part was exceptional as JL Myers really made me “be” the angels when they went from light and energy to emerging hands and head and … How they had to find names for a “hand” for ….

Once Angels are made flesh they still watch over humanity. Only ….this flesh came with many emotions and feelings. Especially Gabriel so sweet and loving. She tought Lucifer to feel and love. And that’s exactly because he felt so much that Lucifer will fall. But that’s also because of his “humanity” that I felt closer to Lucifer than distant and manipulative Michael * no I don’t like him you get it by now*.

That was me with Michael ….

I won’t say much about the plot as I don’t want to spoil your fun. Just know that if you want an interesting and fresh story on the “making of” Lucifer with all the manipulations and twists leading to his fall don’t look further!

Now I wonder what will happen to him. And to gabriel. And if God will see what his precious Michael has done. And ….