As I am behind on reviewing books, I have decided to go for mini reviews this month, except for books who would rock my world LOL.

So here you go for these two YA.

Felix Ever After by Kacen Callender 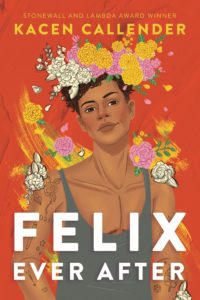 From Stonewall and Lambda Award-winning author Kacen Callender comes a revelatory YA novel about a transgender teen grappling with identity and self-discovery while falling in love for the first time.Felix Love has never been in love—and, yes, he’s painfully aware of the irony. He desperately wants to know what it’s like and why it seems so easy for everyone but him to find someone. What’s worse is that, even though he is proud of his identity, Felix also secretly fears that he’s one marginalization too many—Black, queer, and transgender—to ever get his own happily-ever-after.

When an anonymous student begins sending him transphobic messages—after publicly posting Felix’s deadname alongside images of him before he transitioned—Felix comes up with a plan for revenge. What he didn’t count on: his catfish scenario landing him in a quasi–love triangle….

But as he navigates his complicated feelings, Felix begins a journey of questioning and self-discovery that helps redefine his most important relationship: how he feels about himself.

Felix Ever After is an honest and layered story about identity, falling in love, and recognizing the love you deserve.

I won’t lie: in the beginning of the story, I had a hard time falling into it and loving Felix.

Maybe it’s the narrator’s voice that took me some time to get used to (not my favorite voice)?

And he was really aggressive with Declan too.

Ezra did not fare better in my eyes, getting stoned and partying all the time.

While I am writing these words, I realize that I was exactly like these judgemental people in the book. And maybe that’s what the author wanted me to feel like.

But slowly, I realized that Felix’s “attitude” was of course because he was fed up with people telling him who he was or what he was. He was also hurt by his mother’s rejection.

And above all else, he had doubts. So many doubts.

If there is one thing that book excelled at it was really throwing all preconceived ideas I could have had about transgenders to the trash.

I believed (naively) that once they decided their physical gender was not their real gender, trans went through of course a very hard process but I never thought that once they changed, they could still have doubts!

As Felix said nearing the end of the book, he felt like a boy most of the time but sometimes, he felt like a girl. And that’s where I learned a new term: demiboy (or demigirl).

That was very eye opening!

I was also touched by what a big mess Felix ended up making of his love life and friendship. He made mistakes and regretted them. That part was what won me to the book.

Because he stopped being aggressive and he became fragile.

To sum it up: this book is a huge success and if it didn’t amaze me like I expected based on the hype, it certainly taught me a lot about transgenders.

The Ravens by Kass Morgan and Danielle Paige 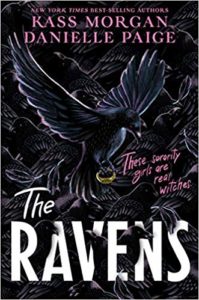 Kappa Rho Nu isn’t your average sorority. Their parties are notorious. Their fundraisers are known for being Westerly College’s most elaborate affairs. But beneath the veil of Greek life and prestige, the sisters of Kappu Rho Nu share a secret: they’re a coven of witches. For Vivi Deveraux, being one of Kappa Rho Nu’s Ravens means getting a chance to redefine herself. For Scarlett Winters, a bonafide Raven and daughter of a legacy Raven, pledge this year means living up to her mother’s impossible expectations of becoming Kappa Rho Nu’s next president. Scarlett knows she’d be the perfect candidate — that is, if she didn’t have one human-sized skeleton in her closet…. When Vivi and Scarlett are paired as big and little for initiation, they find themselves sinking into the sinister world of blood oaths and betrayals.

I was surprised how much I enjoyed this book!

I didn’t have expectations and maybe that helped but I just knew that I wanted to read about witches in college, in a sorority!

You have two point of views.

One from Vivi, friendly, kind, clueless and eager.

One from Scarlett, very competitive , quite bitchy sometimes because she wants to be strong and flawless. Hence she ends up giving Vivi a hard time more often than not.

Except the bad cop is not totally bad, just under a lot of pressure and will end up redeeming herself.

I loved reading about the recruiting of witches. The trope of “discover you have unknown magical powers” is one of my favorites (probably because I dream that could be me one day, even if I am fifty 😉 ) so I was in heaven when Vivi discovered with wonder that she was a witch! Imagine that one day you discover that you have magical power and that you might be a very strong witch at that! Cool right?

Having a killer on the lose targeting the witches added a tension throughout the book, one more layer to the story. But I confess that at some point I had my suspicions about said killer.

This story around found family, discovered power and the strength of having friends helping you was really easy to read and perfect to have a nice, uncomplicated reading afternoon.