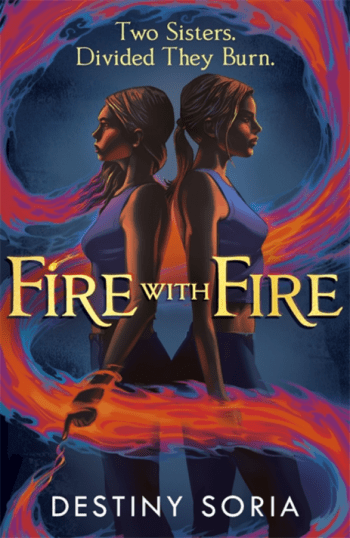 Dani and Eden Rivera were both born to kill dragons, but the sisters couldn’t be more different. For Dani, dragon slaying takes a back seat to normal high school life, while Eden prioritizes training above everything else. Yet they both agree on one thing: it’s kill or be killed where dragons are concerned.Until Dani comes face-to-face with one and forges a rare and magical bond with him. As she gets to know Nox, she realizes that everything she thought she knew about dragons is wrong. With Dani lost to the dragons, Eden turns to the mysterious and alluring sorcerers to help save her sister. Now on opposite sides of the conflict, the sisters will do whatever it takes to save the other. But the two are playing with magic that is more dangerous than they know, and there is another, more powerful enemy waiting for them both in the shadows.

What a pleasant surprise!

I got that book in my Fairyloot box and didn’t have any expectations when beginning my read. I must add that without Caro @cjrtb_books I probably would never have read it as I tend to neglect the books from my book box.

What happened was that Caro finished that one in one day and that I finished it in a little bit more than two days as I had to work!

The beginning was a little slow.

We get to know Dani and Eden, two sisters from a dragon slayer family.

Eden, the oldest, is the overachiever. She wants to make her parents proud and live up to her legacy. Be the best dragon slayer.

She is relentlessly training and supervising Dani’s training too.

Dani seems to effortlessly be good at the slayer work, even if she never killed a dragon.

For Eden’s rigorous training and rules following, Dani is a “devil may care”.

She wants to live the life of a normal teenager with her best friend. Dani keeps the two faces of her life separate. Her friends, school and parties on one hand. Her training as a future dragon slayer on the other hand.

While Dani is partying, Eden is all work and no fun.

That’s why it’s so galling when famous sorcerers, Calla and Archer, visit Deden’s parents and ask only about Dani and not Eden.

Here come complicated feelings. Sibling rivalry mixed with the knowledge of being second best, whatever the effort and dedication. That was a bitter pill for Eden to swallow especially as Dani was not sure she wanted that life!

One night, Dani will encounter a dragon, Nox.

After trying to kill each other, a mysterious and powerful bond will form between them.

Here she is, a slayer forced to hide from her family that she is protecting a dragon.

When Eden discovers that Dani is friend with a dragon, she is certain Dani has been spelled and she will ask for Calla’s help.

That’s when things really kicked in!

Betrayal, jealousy, doubt about everything that’s been taught to you, epic fights, torture…you name it you’ve got it!

You’ll even get one character turning on the dark side!

That story is easy to read, built on complicated feelings. The characters have depth. Nox and Dani’s relationship was interesting and sweet.

Caro hated Eden but I couldn’t help but understand her somehow. Ever the overachiever, I would have been bitter too in her shoes. I didn’t agree with her actions and wanted to shout :”No! Don’t do it!” more than once but I understood where she came from.

I will certainly read the second book!