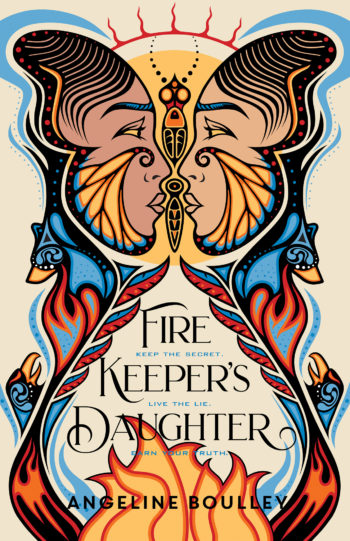 As a biracial, unenrolled tribal member and the product of a scandal, eighteen-year-old Daunis Fontaine has never quite fit in, both in her hometown and on the nearby Ojibwe reservation. Daunis dreams of studying medicine, but when her family is struck by tragedy, she puts her future on hold to care for her fragile mother.The only bright spot is meeting Jamie, the charming new recruit on her brother Levi’s hockey team. Yet even as Daunis falls for Jamie, certain details don’t add up and she senses the dashing hockey star is hiding something. Everything comes to light when Daunis witnesses a shocking murder, thrusting her into the heart of a criminal investigation.

Reluctantly, Daunis agrees to go undercover, but secretly pursues her own investigation, tracking down the criminals with her knowledge of chemistry and traditional medicine. But the deceptions—and deaths—keep piling up and soon the threat strikes too close to home.

Now, Daunis must learn what it means to be a strong Anishinaabe kwe (Ojibwe woman) and how far she’ll go to protect her community, even if it tears apart the only world she’s ever known.

Debut author Angeline Boulley crafts a groundbreaking YA thriller about a Native teen who must root out the corruption in her community, for readers of Angie Thomas and Tommy Orange.

“It’s your identity, but it gets defined or controlled by others.”

I think the author’s note is one of the best ways to convey what this book is about, what its backbone is made of: “Growing up, none of the books I’d read featured a Native protagonist. With Daunis, I wanted to give Native teens a hero that would look like them, whose greatest strength is her Ojibwe culture and community. When making decisions for our tribe, we look seven generations ahead, considering the effects on our descendants.”

I had no idea what to expect before beginning the book. I expected a YA read with Native main character but I never expected to get a thriller with an amazing strong heroine nor to bathe in the Ojibwe tribe’s culture.

Angeline Boulley made me see the roots of the Ojibwe culture.

I loved the tight knit community, the powwows with the traditional dances, all the stories and meanings behind these dances. I admired the respect that community had for its elders.

They were not seen as useless people but as fountain of wisdom. Daunis treated the elders with respect and care and it never felt like a chore to assist them but rather like a chance, an honor.

All the traditional stories, the legends told throughout the book helped me being immerse in that culture and I adored every word!

But Angeline Boulley also writes about past trauma and attacks made against her people by white Catholics.

This demonstrates why the “White” way of assimilating other cultures is so wrong. For centuries we’ve wanted to erase the others, to make them blend into our own beliefs, religion and culture. What a loss!

Why should our way of thinking and seeing the world be the only one, the best one?

I was appalled to learn that kids were taken from their parents, forced to attend Catholic boarding schools and some families never found their children again. And when some came back, they were traumatized with the violent treatments they’ve been victims of.

Sorry I digress from the review but it was so plainly obvious that what’s been done and is still done in some ways is so wrong. I won’t reveal much but what happened to Daunis in that story and what happens frighteningly so often to other native women is awful and should be stopped.

I was shocked and outraged to learn that four Native women in five had been subjected to violence, more than half being victims of sexual violence. And nearly all of these acts had been committed by at least one Non-native perpetrator! What’s wrong with these people!! Why do they target the women of these communities??

I began that review with the cultural references and the importance of Angeline’s roots in that story because they felt like a living character to the story.

But the plot and “real” characters are as important!

She is soon to be nineteen, extremely clever, a brilliant chemist and a gifted hockey player. Daunis is biracial with her mother being white and her deceased father being a member of the Ojibwe tribe.

As many biracial kids, she never fits totally. She is either too white for a community either too Native for the other.

One sentence hit me hard in its truth: “It’s your identity, but it gets defined or controlled by others.”

Her uncle died months ago and now her best friend will die tragically, killed by a meth addict.

Meth dealing has hit the Ojibwe community hard these last months and deaths are piling up.

She will soon be asked by the FBI to become a CI confidential informant and to work with two undercover agents, one of them playing at being her boyfriend, Jamie.

The plot is rapidly thickening and I wondered who was producing and distributing the meth. I had suspicion towards the end but the mystery was cleverly written to keep me on my toes.

That gave a gravity, an intensity to the story that I didn’t expect but loved. I was gripping my book, on edge all the time until it culminated in a dramatic finale.

Daunis won’t be spared anything by Angelin Boullay and that was hard to read at times. I just wanted to erase some scene, to “undo “ and “unread” it. To have her spared. But the reality and that story does not work like that. So, I had to take it all.

All the secondary character were splendidly crafted to give multiple layers to the story . From Granny June who wanted to be driven everywhere and that the council be used as pall bearer at her funerals so that they “could let her down one last time”, to Daunis’s fierce aunt going through Mimi, Granny June’s friend who bought a Mustang to “live her midlife crisis” when she was well over her midlife to…

As you can guess, we get a whole tribe of characters all helping to bring this story to life.

I will stop as this review is already long enough.

Just know that this book will be in my top 5 reads of 2021 and that I experienced it like I did with Where the Crawdads Sing by Delia Owens. Both are totally different and unique but both are books that feel alive and will haunt me for a long time.

If this does not make the list of “best debut novel” for the Goodreads 2021 I’ll be disappointed!