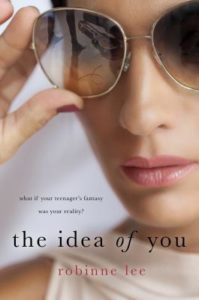 When Solène Marchand, the thirty-nine-year-old owner of a prestigious art gallery in Los Angeles, takes her daughter, Isabelle, to meet her favorite boy band, she does so reluctantly and at her ex-husband’s request. The last thing she expects is to make a connection with one of the members of the world-famous August Moon. But Hayes Campbell is clever, winning, confident, and posh, and the attraction is immediate. That he is all of twenty years old further complicates things.What begins as a series of clandestine trysts quickly evolves into a passionate relationship. It is a journey that spans continents as Solène and Hayes navigate each other’s disparate worlds: from stadium tours to international art fairs to secluded hideaways. And for Solène, it is as much a reclaiming of self, as it is a rediscovery of happiness and love. When their romance becomes a viral sensation, and both she and her daughter become the target of rabid fans and an insatiable media, Solène must face how her new status has impacted not only her life, but the lives of those closest to her.

This book had been recommended to me many times as one of the best romances and an ugly cry! At the end of December, I promised to read it and give some feedback.

I will try to avoid major spoilers but it will be very difficult to say the least as I have lots of feelings to share!

I have conflicted thoughts. Kind of an angel on a shoulder and the devil on the other.

First : “Of course it would be like this. I knew it!” versus “Yes but maybe there was another possibility? Something different?”

Second: “What Solène feared was perfectly normal. And with the age gap it would happen at one point of another” versus “Yes but maybe for him it was not important, would never be  important. You don’t know!”

Third: “Solène’s choice was the right one.” Versus “But that’s choosing for someone else! Hayes is mature and it’s HIS life and his choice too! How would you feel if someone chose in your stead?”

Fourth: “Solène is a mom, I am a mom. We HAVE to protect our kids at all cost.” Versus “Of course but what picture does it give to Isabella when her mom tells her that there is no limits to what she can do?”

And I could go on and on.

I will highlight what I admired in the book, what worked for me, what didn’t work and talk about the characters.

First of all, to get it out of the way: did I ugly cry?

The answer is no.

Not because it was not sad or gripping but because I was ready thanks to friends wanting to send me box of tissues. I knew there would be angst and drama. I am also a middle-aged woman and I could relate to Solène, be a little “clinical” in my read as I think I would probably have had the same fears!

When you are hit on by a famous and very sexy twenty years old singer while you are forty, it is flattering, exhilarating and frightening. I think this passage gives the core of Solene’s conflict:

“What are you most afraid of?”

“Everything. Isabelle having a nervous breakdown. And it being my fault. Getting older. Getting old. My boobs, my upper arms, my ass. All of it. Eventually he’s going to take a good look at me and be like, ‘Bollocks! You’re forty!’”

If you think of giving in, things are doomed to get messy.  People will judge! Because there is that big age gap. And I couldn’t avoid thinking that this was completely unfair! This was so double standard because had things been reversed and Hayes had twenty years more than Solene, people would never have batted an eyelash!

Even more: mothers are expected to sacrifice everything for their kids!

A father leaving his kid it’s a very sad story. A mother abandoning her kid, it’s a shame! Unthinkable! Not that Solene ever entertained the idea to leave her daughter behind but this is to illustrate the injustice!  And that drove me mad! And sad as I realized that I too would probably judge (at first hopefully) like so many people. Did I stoop so low??? Why can’t people mind their own business??

Solene was lucid all along and I admire this about her. Yet she did not flee and tried to avoid enjoying “this”, whatever “this” was.  She thought about having a fling with a young Rockstar. She was divorced, free. But she got more than just sex.  And when she felt if became deeper, she was frightened. By all that the future would have in store for them.

Even if she had good reasons after what she went through, after what her daughter went through. She still was taking his choice away. And that I could not forgive her, even if I understand to some extent.

“I know what you are doing, and I’m just going to stand here and let you push me away. You are trying to push me away.”

“I’m a person. First and foremost. And I have feelings. And I know this carreer comes with a lot of baggage, but don’t write me off just because I’m in a fucking band. It’s what I do, it’s not who I am.”

I just wanted to shout: “Yes Hayes! That’s the way to go! Show her! Explain to her that you are more than a young singer in a boy band!”

I really loved Hayes. Not only was he sexy but at twenty he had an incredible experience in the bedroom that he did not use for him selfishly! He also was extremely well adjusted and mature, even if having so much feelings for Solène, his insecurities surfaced from time to time. When things got ugly. When he could not reach her. He was strong yet felt so much. Sexy but attentive. Protective but not overbearing. He respected Solène, he admired and encouraged her. He was sensitive with a “conscientious soul”.

This love story is intense, it’s conflicting, it’s beautiful, it’s angsty and it’s extremely well written. I can’t believe that this is Robinne Lee’s first book. She has an incredible talent to bring characters to life and give so many nuances to their feelings. She built that story like a seasoned writer and played my feelings like a maestro. It was never unbelievable, never grotesque in the exaggeration, never cliché. I am in awe.

Thank you to all of you who recommended this story to me on my Facebook page, especially Angela who was so convincing!

Have you read this one?