FLOCK, book one in The Ravenhood Duet from best-selling author, Kate Stewart, is LIVE! Get ready for a sinfully HOT, ANGSTY, UNCONVENTIONAL, and TWISTED love story filled with suspense, a little action, and ALL. OF. THE. FEELS! 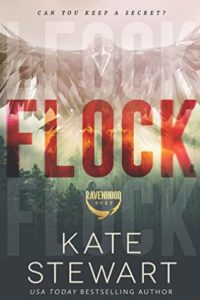 Can you keep a secret?
⁣
I grew up sick.⁣
⁣
Let me clarify.⁣
⁣
I grew up believing that real love stories include a martyr or demand great sacrifice to be worthy.⁣
⁣
Because of that, I believed it, because I made myself believe it, and I bred the most masochistic of romantic hearts, which resulted in my illness.⁣
⁣
When I lived this story, my own twisted fairy tale, it was unbeknownst to me at the time because I was young and naïve. I gave into temptation and fed the beating beast, which grew thirstier with every slash, every strike, every blow.⁣
⁣
Triple Falls wasn’t at all what it seemed, nor were the men that swept me under their wing. But in order to keep them, I had to be in on their secrets.⁣
⁣
Secrets that cost us everything to keep.⁣
⁣
That’s the novelty of fiction versus reality. You can’t re-live your own love story, because by the time you’ve realized you’re living it, it’s over. At least that was the case for me and the men I trusted my foolish heart to.⁣
⁣
Looking back, I’m convinced I willed my story into existence due to my illness.⁣
⁣
And all were punished.

Well …. I am still reeling from that read!

First, I didn’t expect to love it. It’s better to go in blind so I won’t elaborate let’s just say there is a trope I am usually not fond of at all! As I had heard rumors about this, I asked my friend Tracey : “OK, is it true? Because I hate this and that’s so not my cup of tea!”.

And she told me: “Yes but still, trust me, read it, it’s mind blowing!”

And I promised. Fully expecting to hate it.

The story is told by Cecelia and I won’t tell you much as it’s better to have no idea what to expect!

Let’s just say that the opening is years later, after the events and the rest of the book takes place and Cecelia is nineteen years old. She has been sent by her depressed mother to live with her millionaire of a father.

Cecelia arrives in a small town to live in his mansion while having been raised by a relatively poor mom.

Cecelia is the A student. The walk the line girl as she has seen what happened when you go wild while young. She is determined not to follow in her mother’s footstep. Now, she has to live one year with her estranged father, work at his plant then she’ll be off to college with a small fortune.

But the first day at work, everything changes when she meets the very, very seductive Sean who will introduce her to his friends, a real brotherhood of men all sporting the same tattoo of a raven.

I will stop at this for the plot and will focus on what I felt and what you can expect from that read.

First, I nearly DNF in the beginning.

Because said trope was followed and I was raging against the heroine! But then, she reacted like I would have in her stead and I thought:” Atta girl! Well done!”

Then it changed again. But Kate Stewart did the impossible: she made me like something that I hate!

Honestly, that woman is magic! How she did it was so organic, so natural and effortless that I didn’t realized I was used to it and even enjoying it before I was lost! I tell you Kate is a word wizard!

Then there was the secrecy. And me trying to guess every secret. To anticipate the moves and the twists. But to no avail.

After, came the raging emotions and, at one point, utter devastation.

And it ended on a huge cliffy with a big twist I never saw coming!

So, congrats Kate Stewart, you convinced me! Me the one who went into this expecting to loathe it and who ended up bowing low to your talent and thanking you that the next book would be released so close to this one!

Kate is a lover of all things ’80s and ’90s, especially John Hughes films and rap. She dabbles a little in photography, can knit a simple stitch scarf for necessity, and on occasion, does very well at whiskey.