“Confession: My name is Batsheva Rosselli, not Eva Bianco, and I am a Jew. Angelo Bianco is not my brother but a priest who wanted only to protect me from the very place I now find myself.”

Amy did it again: swept me off my feet and carried me into her world.

If you follow my reviews you should know by now that I’m a HUGE fan of Amy Harmon. She can say in just a few words what I could not convey with two pages. She is a words magician.

Reviewing her books is always a daunting task as I have so much to say (I took pages and pages of quotes). In this place, our place, I’ll be free to express all my gushing praise and enthusiastic rambling. 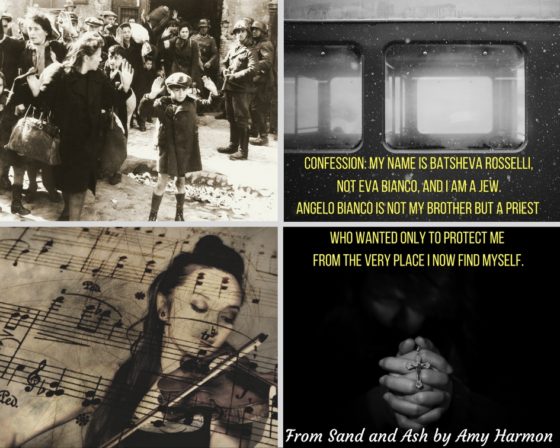 First of all know that this book is not only a love story it is a people’s story. The Jews, the Italians, the Christians… the Catholic clergy who tackled the enormous task to hide the hunted.

There are so many books written about World War II and its atrocities but Amy chose to highlight the fate of the Italian’s Jews helped by the church and protected as could be by the Pope.

In her acknowledgements she wrote: “It was a terrible time, but the silver lining was the revelation of such goodness and heroism. For me, the horror was eclipsed by the stories of bravery and valor. Eighty percent of Italy’s Jews survived the war, a marked contrast to the eighty percent of Europe’s Jews who did not.”

I was impressed and in awe with the historical setting. As usual Amy Harmon painted a realistic world. Word after word this era and these utterly incredible, courageous and loveable characters became my world.

How can humanity commit such atrocities? What pushed ordinary and usually kind and compassionate men to kill others following one dictator’s orders? How could they sleep at night? What would they tell their wives and girlfriends?

Whole family trees were cut short many families disappeared in this horrendous era.

Amy  Harmon showed us the slow death of the Jewish people, small humiliation after small humiliation, unfair law after law. It was heart wrenching to witness the quiet strength of this hunted people.

Amy also demonstrated how common citizens can morph into informers and turn against their neighbors.

But in the chaos and despair hope blossomed. Ordinary men and women morphed into real heroes saving countless lives.

“Eva Rosselli sat with her back to my door, her legs braced against the wall, while the Gestapo shot through it. She single-handedly saved my entire family.”

If the historical background was fascinating the love story was bitter sweet and brilliantly executed.

“I would dance around him, playing my violin and singing little songs, just to see if he would smile. When he did, I would hug him and kiss his cheeks.”

They were in love but Angelo found his calling enraptured by Donatello’s sculpture of Saint George. He was thirteen but knew he would become a priest.

Angelo had a huge determination:

“Unyielding Angelo, she’d called him. She’d told him once that his virtue was as disheartening as it was admirable.”

Eva the girl playing the violin did not own the one legged boy.

“I have always been yours, Angelo,” she said, echoing the very words he’d thought while he prayed. She was his. “But you have never been mine.”

His rejection hurt her so much. They won’t see each other for years until Eva’s safety was compromised in the midst of the Jews annihilation. Angelo made a promise to protect her, always.

He was torn between his love for Eva and his calling. He was bleeding for her. He felt powerless so many times and yet he would have taken her suffering in a heartbeat.

“I would take it away from you if I could. I would take it with me. I would take your pain and bear it for you.” He would happily endure her sorrow if it meant she wouldn’t have to. “I know,” she said again, as if she truly believed him. “I know you would. But sadly, that is not how pain works, is it? We can cause pain, but we can so seldom cure it.”

Their love was pure and yes I know it feels sacrilegious as Angelo was a priest but that’s how I experienced it. It shone bright. An evidence.  And yet Angelo had to fight so many temptations…

I loved all the characters of this story. Eva had a tranquil strength with a fire under the ashes. She’ll endanger herself time and again to save her people. Angelo was determined to do his duty the best he could. He was tirelessly smuggling hunted people, hiding them with the help of the church. So many nuns, monks, priests or common civilians became real heroes. Revolted and horrified by what was done to Jews they could not stay still.

Reading this book reminded me of the many stories my grand-mother told me about the war. It was better than history books as it’s in the little details that you feel the horror and gravity of the war. That’s what I found in Eva and Angelo’s story. All these details to make it real.

I was always wondering: What would have I done? Would have I been courageous like my grand- father and refuse to help the Germans? Hid Jews? Or been a coward looking the other way?

What would it be to be hunted? To constantly fear for my own life? And if I was arrested how would I face the certainty of death?

“She had almost felt relieved when she was arrested. The thing she had dreaded, feared, run from, had happened. When it came, she was strangely liberated from the fear. She couldn’t dread what had already come to pass. She didn’t have to anticipate the horror anymore.”

Honestly Making Faces was my “best of the bests” so far but I’m not so sure anymore. This book made me feel so much: agony, rejection, despair, anger, resignation and constant fear. Just know there is not a single world I would change and prepare for pure genius.