Furyborn is simply an exceptional read. 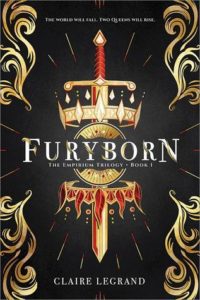 The stunningly original, must-read fantasy of 2018 follows two fiercely independent young women, centuries apart, who hold the power to save their world…or doom it.When assassins ambush her best friend, the crown prince, Rielle Dardenne risks everything to save him, exposing her ability to perform all seven kinds of elemental magic. The only people who should possess this extraordinary power are a pair of prophesied queens: a queen of light and salvation and a queen of blood and destruction. To prove she is the Sun Queen, Rielle must endure seven trials to test her magic. If she fails, she will be executed…unless the trials kill her first.

A thousand years later, the legend of Queen Rielle is a mere fairy tale to bounty hunter Eliana Ferracora. When the Undying Empire conquered her kingdom, she embraced violence to keep her family alive. Now, she believes herself untouchable–until her mother vanishes without a trace, along with countless other women in their city. To find her, Eliana joins a rebel captain on a dangerous mission and discovers that the evil at the heart of the empire is more terrible than she ever imagined.

As Rielle and Eliana fight in a cosmic war that spans millennia, their stories intersect, and the shocking connections between them ultimately determine the fate of their world–and of each other.

I got this ARC of Furyborn and I could not have been happier! It deserves 6 stars and I just wanted to forget the world, my duties and read it!

Simon had been hiding in her closet, fingers jammed into his ears to block out the noise. For hours, he had crouched there, knees drawn to chest, head bowed.

For hours, the queen’s rooms had shuddered in tandem with her screams.

Now, there was silence.”

First lines of Furyborn and the beginning of my love affair with this epic story.

Furyborn is simply an exceptional read.

From the first sentences I was immersed in this fantasy universe. I was alternatively Rielle fighting to be accepted and loved for the extraordinary being she was or Eliana “The Dread of Orline” trying to forget what she had done to survive and protect her family.  The world is inventive and the switch between Rielle and Eliana’s POV kept me on my toes. It’s a well-known writing trick but diabolically effective when done properly.


The universe, the plot and the penmanship.

Claire Legrand built her own universe filled with human bearer of magic through castings, marques, angels trapped centuries ago behind a gate but trying to escape and revered saints.  I lived in a fantasy medieval universe for the span of a few days. Climbing mountains, diving into oceans, running on crowded streets or witnessing fights and sinful acts underground.

Both female main characters had their quest as in every worthy fantasy read.

Following Rielle was like reading about Hercule’s quest. She had to go through many trials and prove her strength and control. It was riveting as she was pushed under tremendous ordeals and each time could lose her life. I swear she has nine lives! Every time I thought she would die pushed to her limits. But Rielle is an extraordinary heroine.

Her friendship with Ludivine and Audric fleshed out the story hinting at what was to come in the future and a welcome reprieve from all the stress reading about her trials.

Eliana was sent on a quest of her own as she had to find her mother kidnapped by unknown forces. She discovered terrible secrets. Evil is lurking at every corner and humans may be doomed. Who is The Wolf that mysterious rebel captain that she is following with her brother Remy in the hope of saving her mother? What are these men kidnapping girls and women? They feel so wrong.

The story is filled with actions, acts of valor, secrets and plot twists.

The penmanship is flawless. Efficient, intelligent with enough description to make me see this universe but not enough to slow down the fast pace of the story.

I loved the dual POV. We don’t have one but two main characters. Centuries apart. Seemingly vastly different. And yet…

Eliana was hardest to love. She has built a wall around her heart and kept me at safe distance. How can you easily like a girl who is a killer stopping people to evade the evil emperor’s clutches to join the Red Crown? Someone capturing even children to deliver to lord Arkelion and knowing what terrible fate awaited them? But her seemingly cocky and remorseless attitude is just an act. She may say “Good girls don’t live long” or that she did it all to survive and protect her family guilt is eating at her.

I warmed up to Eliana by the end of the story thanks to the choices she made. It is said that actions speak louder than words and it’s true. I wonder if the second installment will have Eliana win my heart.
It is said early on in the book that “Queen Rielle allied with angels to kill humans and her husband” so she should be the bad guy of the story and yet…

I followed Rielle through her youth. She was forced to hide what she was isolated in her secret and I still don’t know today what she really is. She had to repress her emotions constantly just to stay in control of her powers. What she had done was terrible and she bore the guilt of her action. Her father always distant while she wanted his affection. She was close to Audric the prince and Ludivine his betrothed and yet she wanted so much more.

And I could not help loving her.


Rielle is the embodiment of what power can do to a person.

What would I do if I was invincible? What would YOU do with all that power? Use it for the benefit of others or become a tyrant? Power can corrupt. It is so tempting when you are stronger than everyone to force others to bow to you.

When offered the opportunity to shine Rielle could have crushed everyone and chose “him” but she resisted. She wanted to do good. “My happiness is unimportant compared to the safety of those around me.”

That’s why what is said to have happened is so intriguing. Why and how did she do it? It seems so out of character for that girl…It must have destroyed her. I can’t wait to find more in the next installment.


Claire Legrand has achieved the high feat of finding her place between Cassandra Clare and Sarah J Maas on my shelves all with only one book! I absolutely adored this story and I would recommend it a thousand times if you are a fantasy lover like I am.

I’m incredibly thankful to have gotten this ARC and I can’t wait to have the final cover in my hands to feature bookstagrams!

Have you read this book or other books by Claire Legrand? Did I convince you to read it? I hope so!