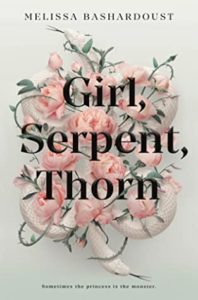 A captivating and utterly original fairy tale about a girl cursed to be poisonous to the touch, and who discovers what power might lie in such a curse…There was and there was not, as all stories begin, a princess cursed to be poisonous to the touch. But for Soraya, who has lived her life hidden away, apart from her family, safe only in her gardens, it’s not just a story.

As the day of her twin brother’s wedding approaches, Soraya must decide if she’s willing to step outside of the shadows for the first time. Below in the dungeon is a demon who holds knowledge that she craves, the answer to her freedom. And above is a young man who isn’t afraid of her, whose eyes linger not with fear, but with an understanding of who she is beneath the poison.

Soraya thought she knew her place in the world, but when her choices lead to consequences she never imagined, she begins to question who she is and who she is becoming…human or demon. Princess or monster.

I had high hopes for that book as the cover is gorgeous (my Fairyloot special edition with the pink cover is dreamy) and also because of the blurb but something didn’t work for me. Unfortunately, it didn’t live up to my expectation.

Whats’ the plot in a nutshell:

Soraya has been hidden away by her family her whole life as her touch is poisonous. Her twin brother is now the reigning shah and in the beginning of the story, he arrives with their mom and the whole entourage to the spring palace where Soraya resides.

We have the opening scene with Soraya high above from the roof of Golvahar observing the royal family’s procession to the city.

That first scene let us grasp how alone she’s been all her life. Even touching a beetle makes the insect die.

We will soon realize that after a div has been caught and imprisoned in the dungeon, Soraya will try to find a way to lift her curse.  That’s where a handsome stranger enters the scene and become her ally in her quest.

I won’t tell more as I don’t want to spoil your fun.

Now let’s get to the bright side of the story:

I immediately fell into this world filled with bad divs, magical creatures, exotic palaces hiding secret passages and poisonous princess. The world building is very good and I loved the mythology.

I could also feel Soraya’s loneliness and craving for a touch. Her feelings were confused and in turmoil all along. And I could feel them perfectly: her resentment, her jealousy, her fear, her craving, her conflicting emotions. Also, the surge of power and the temptation later on in the book. What I couldn’t feel though and I’ll get back to it below, was her love.

I also loved the tropes and the surprises the author had in store for us, even if I had guessed one of the biggest ones.

The pace was also just what was needed for such story: not too fast, not rushed but slowly unfurling to accelerate at times.

But sadly, some things didn’t work for me and prevented me to give a higher rating.

I found the character’s development erratic and the romance unconvincing, unnecessary even.

Soraya was either too bad for my taste, either too virtuous. I never could decide what she truly was and what I wanted her to be. I had a similar problem with the female character of The Shadows between Us. She switched between wanting to do what’s right, wanting to be good and then being tempted to use her power, to become someone else. In a way that was very well done of the author and it was very realistic. No way someone who has been rejected and kept in the shadows all her life would never resent her family, experience jealousy and be angry to the point of being tempted to have her revenge!

I would not probably have resented her from going from virtuous in the beginning to becoming a little bit wicked and then getting back to her sense. But what bothered me and gave me whiplash was that this process happened several times in the book. Hence my choice of “erratic” for the character’s development.

She also made many mistakes that felt really selfish and foolish to me even if I could understand her huge frustration and her resentment.

Another thing bothering me was that the path she chose was due to her mother keeping some secrets and I could not understand why these secrets were never revealed to Soraya! We could have avoided such drama!

Added problem for me: I didn’t like the family relationship or lack thereof. Family is a trope I love. But the author did not choose for an evil family either it was just a “sorely lacking one”. Again, kind of going for the middle road.

Last but not least: the romance did not interest me either. For a romance reader that’s huge to say such thing! But I did not feel the moment she fell in love nor had any particular fondness for the love interest. This was my first F/F, something that I dreaded even if I love M/M but I shouldn’t have as it left me unmoved. I didn’t believe in it and frankly, the book could have worked perfectly just with a sisterhood rather than that attempt at romantic element.

Let’s conclude on something positive though!

The most interesting character to me, the one I found the most “finished” or “polished “ in all his complexities was the Shamhad. The peek we got in his past, in his descent were extremely well done and he made for a perfect villain to hate to love.

This is of course just my own very personal opinion and the book has a lot of potential. I have seen many enthusiastic reviews in the blogosphere so I’d say: don’t let this deter you from giving this book a chance if you feel this could be something to your liking!